A geoscientist said that not only is the ie sheet melting, it ismelting at a faster pace.

The highest point in Greenland is not surprisingly covered in ice — but a week ago, it was covered in rain for the first time on record.

According to the National Snow & Ice Data Center, Greenland’s ice sheet experienced temperatures above freezing for about nine hours on Aug. 14, allowing rain to fall. It’s an alarming sign for the ice sheet that has seen melting events occur more frequently in recent years.

It marks the third time in less than a decade that the National Science Foundation’s Summit Station observed temperatures above freezing and wet snow. Just a month ago, Greenland experienced a melting event on a scale large enough to cover the entire state of Florida in two inches of water.

"That's not a healthy sign for an ice sheet," Indrani Das, a glaciologist with Columbia University's Lamont-Doherty Earth Observatory, told Reuters. "Water on ice is bad. … It makes the ice sheet more prone to surface melt."

Besides being warmer than snow, water is darker. Ice sheets protect themselves from direct sunlight because their surfaces reflect the light away.

But in its liquid state, the water absorbs it, becoming warmer along the way and triggering more melting. It’s the metaphorical snowball effect. 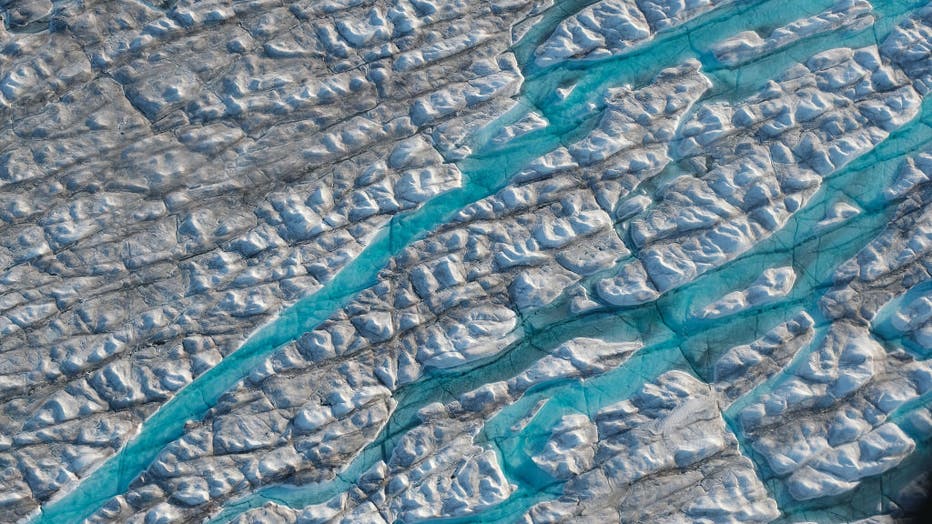 In this view from an airplane rivers of meltwater carve into the Greenland ice sheet near Sermeq Avangnardleq glacier on August 04, 2019, near Ilulissat, Greenland. (Photo by Sean Gallup/Getty Images)

Scientists say this month’s event was due to a strong low-pressure center off Baffin Island and high air pressure southeast of Greenland. The two rapidly pushed warm air and moisture from the south up to the 10,551-feet high summit.

The whole of Greenland saw rain from Aug. 14 -16, triggering a widespread surface melting event along the southeastern coast.

RELATED: Study suggests Greenland ice sheet is ‘close to a tipping point’ due to global warming

Researchers have been sounding alarms about Greenland, saying its ice sheet is "close to a tipping point." The current configuration of the ice may become unstable, researchers said.

Their findings, published in the Proceedings of the National Academy of Sciences, also noted that mass reductions to the ice sheet could have substantial impacts on global sea level and the speed of the Atlantic Meridional Overturning Circulation, due to the additional freshwater caused by the increased meltwater runoff.