The FOX 35 Storm Team is tracking four systems in the Atlantic Ocean. One wave coming off of Africa has an 80 percent of becoming better organized and is one that we will be monitoring closely. The other three systems do not appear to pose any threat to the United States.

ORLANDO, Fla. - The FOX 35 Storm Team is tracking two tropical storms and two disturbances as they churn through the Atlantic.

The National Hurricane Center (NHC) said that Tropical Storm Peter continues to churn in the Atlantic, moving towards the west-northwest near 14 mph. It is expected to pass north of the Leeward Islands early this week.

They said that it is currently packing maximum sustained winds of 50 mph. Slow weakening is expected. 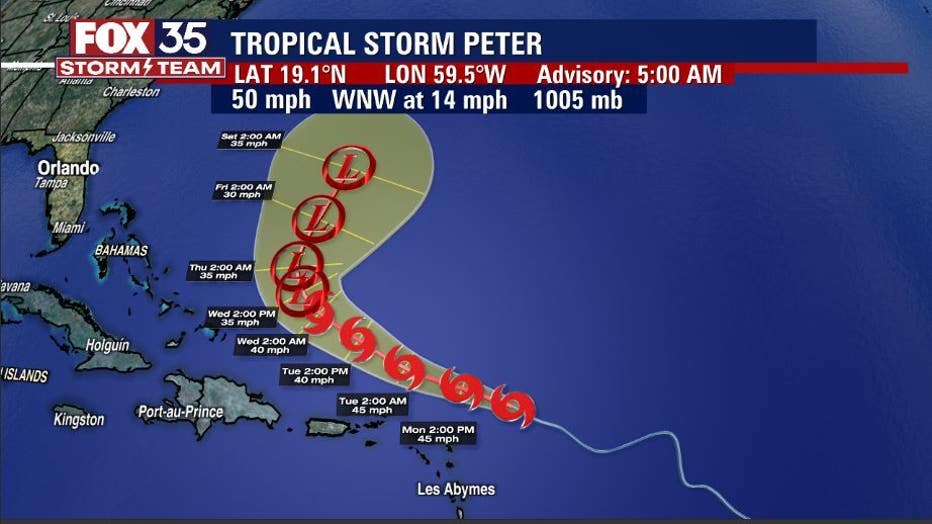 The storm could dump one to three inches of rain across portions of the Leeward Islands, including the Virgin Islands and Puerto Rico, through Tuesday, forecasters said. In addition, swells generated by Peter could reach the Bahamas by mid-week and could create life-threatening surf and rip current conditions.

Also churning in the Atlantic is Tropical Storm Rose. The NHC said that it is moving northwest at 15 mph. At this time, it is not expected to impact land. 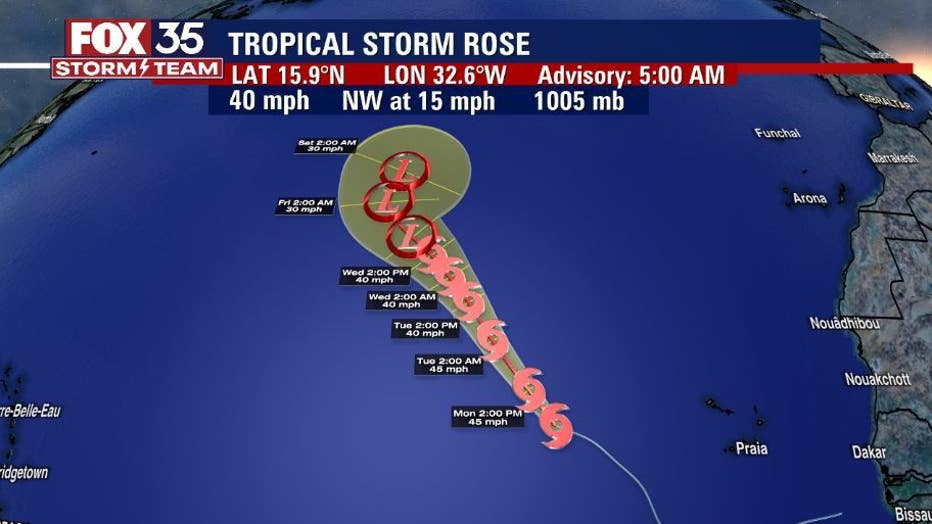 They said that it is also packing maximum sustained winds of 40 mph. It could strengthen more on Monday but by Tuesday, upper-level winds are expected to become less conducive and Rose should begin to weaken.

Finally, the NHC has also identified two disturbances in the Atlantic.

One is a tropical wave located several hundred miles southeast of the Cabo Verde Islands. They said that it is producing an area of disorganized showers and thunderstorms. Environmental conditions appear to be conducive for gradual development over the next several days. A tropical depression is like to form by Friday while the system moves westward. Formation chances over the next two days are at 80 percent over the next five days. 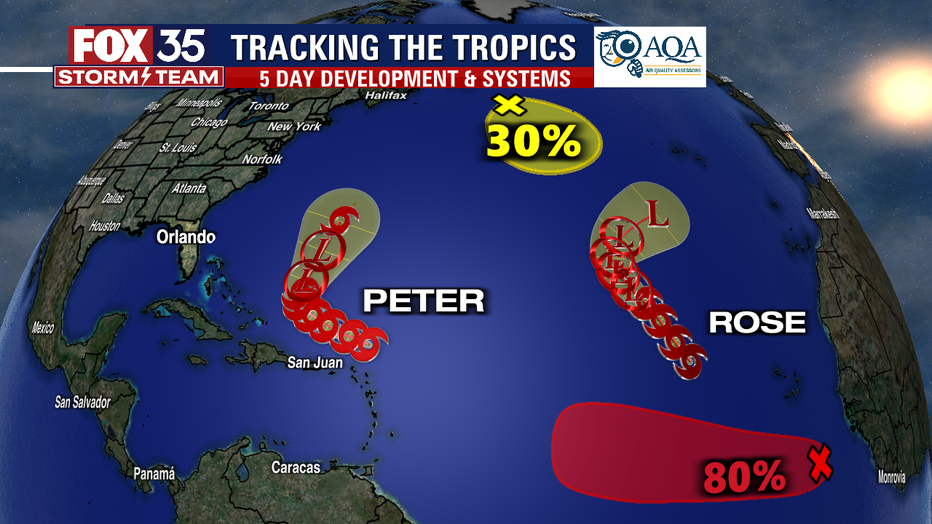 Forecasters said that the other disturbance is a non-tropical low-pressure system, which is actually composed of the remnants of Odette, located a couple of hundred miles southeast of Newfoundland. It could acquire some subtropical characteristics by the middle of the week as it moves slowly eastward and then southeastward across the north-central Atlantic Ocean. Formation chances over the next five days are at 30 percent.

"A fully-loaded downpour pattern will remain over central Florida for the next four days, ahead of one of the season's first cold fronts, set to usher in drier air for the weekend. This will shut down the daily downpour machine and make the air in the afternoons feels noticeably less humid," said FOX 35 Strom Team Meteorologist Brooks Garner.

However, Garner said it won't have much impact on the temperatures, which will remain hot with highs near 90 degrees. Overnight lows will be a bit cooler in response to the lower dew points, but with all the recent rain, the impact won't be as dramatic as if we were in a drier period. Expect lows between 68 to 73 degrees.

"Not bad, but we're not quite at those 40s and 50s for overnight lows that so many get excited for in the fall," Garner added.

The first day of autumn falls on Wednesday, with the autumnal equinox at 3:20 p.m.