It takes patience and preparation to be a great photographer. Jack Miller, a photographer from Deltona, Florida, focuses on a specific subject: storm time-lapses.

DELTONA, Fla. - It takes patience and preparation to be a great photographer. Jack Miller, a photographer from Deltona, Florida, focuses on a specific subject: storm time-lapses.

From rising thunderstorms, and foreboding shelf clouds, to electric sea breeze collisions, his cameras have seen everything Florida has to offer. Miller's love for the chase started eight years ago. His weather photography has now turned into a profitable business selling prints of his favorite weather photos. Though, he jokes that it is not an inexpensive venture to start.

"I thought I’d give it a try and buy a $50 Kodak camera," he said. "Got my first lightning bolt and have been broke ever since."

Finding the perfect place to capture storms as they roll across Central Florida is not an easy task. It's taken years for him to find the best spots around the state.

"You start to accumulate all these spots that you have that you know are good positions to be at for the storms later in the afternoon, which saves a lot on drive time, preparations, and also gas trying to find these spots to shoot from," he said.

FOX 35 joined him on the road to see one of those spots – near St. John's River in Sanford. The treeless horizon makes for an undisturbed spot to record a time-lapse video. 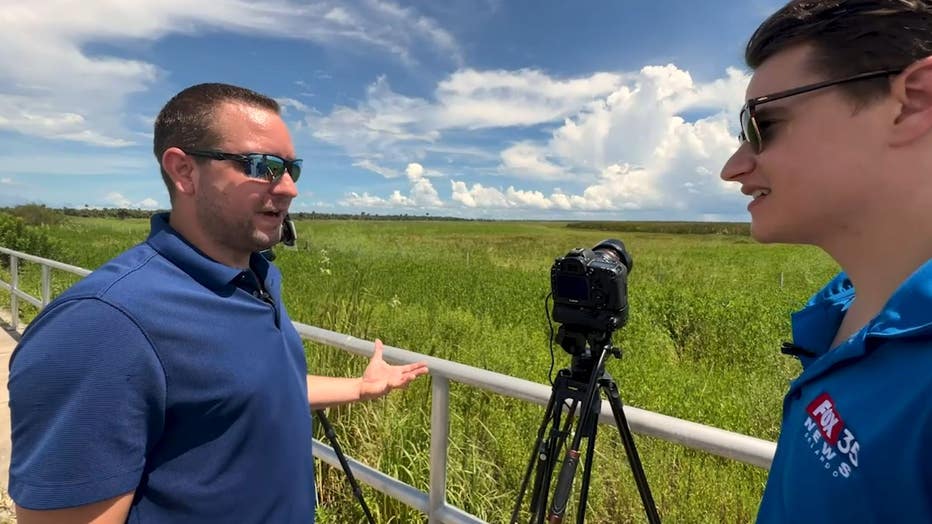 He said it typically takes him 700 to 800 photos, and about 45 minutes to an hour, for him to get ten seconds of useful content to make a time-lapse video. That time needed is part of what makes planning his day so important, especially given the chaotic nature of Florida storms.

"If I got a good collision with a nice mature storm, I am there for a good two to three hours. Then I am shooting 1,200 to 1,500 shots just to get a usable fifteen to twenty seconds," he said.

His coverage of Florida’s stormy summer afternoons earned him international attention back in 2017.

"I got a reach back from WMO, United Nations asking if they could go ahead and use it for their opening ceremony which is an absolute honor," he said.

Moments like that are a reminder to him of how powerful pictures from the chase can be.

"Coming out here and experiencing the storm and then being able to permanently capture it on media — whether it’s time-lapse photography or on print — it’s gratifying to be able to preserve that moment in time that you were able to witness that you might not get back again," he said.