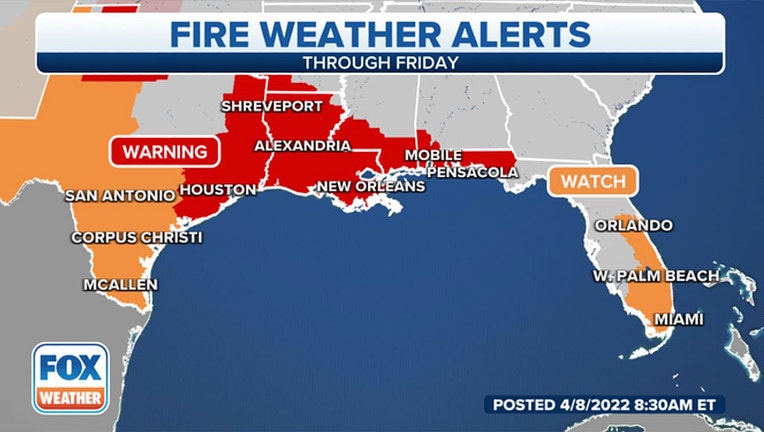 Strong western winds and low relative humidity are creating the perfect combination for dangerous wildfires to quickly spread across the Plains, the South and into the Florida Panhandle.

Fire conditions will be particularly critical across east Texas, southern Louisiana and the Florida Panhandle heading into the weekend.

"Gusty northwesterly winds will be widespread from the northern and central Plains to the Gulf Coast, supporting a broad area of Elevated to Critical fire weather conditions," the SPC outlook said.

The Nebraska Forest Service and other agencies continue to battle a 30,000-acre wildfire that is burning out of control in Gosper and Furnas counties.

A fire chief was killed in a crash Thursday responding to the fire, according to the Nebraska State Patrol.

Elwood Fire Chief Darren Krull, 54, and Phelps County Emergency Manager Justin Norris, 40, were struck by a truck hauling water outside of Arapahoe on Highway 283, according to troopers. Krull died at the scene of the crash. Norris was taken to the hospital suffering from life-threatening injuries. He is in stable condition as of Friday.

"The fire and smoke in the area had created zero-visibility conditions on the roadway at the time of the crash," Nebraska troopers wrote in a news release.

Crews continue to battle a massive wildfire in Beaver County in the Oklahoma Panhandle Friday. The Beaver River Fire has consumed more than 20,000 acres and is 50% contained, according to the Oklahoma Forestry Service.

The NWS has issued a High Wind Warning for western Oklahoma until 8 p.m.

To the southeast, a Florida Panhandle community was evacuated Friday after a prescribed burn came too close to homes.

Dickerson City was evacuated on Friday due to a prescribed fire in Santa Rosa County's Garcon Point.

Firefighters with the Florida Forest Service were working to contain the fire of unknown size as of Friday afternoon.

According to the NWS in Tallahassee, conditions in the Florida Panhandle are breezy with 20 to 30 mph winds and low relative humidity between 20 and 30%. High wind warnings are in effect until 7 p.m. for parts of the Panhandle.

Across the Plains, fire weather warnings and watches are in effect from Nebraska, Kansas, Oklahoma and Texas.

Wind gusts up to 30 and 40 mph in Texas could rapidly spread any sparks. It's imperative not to burn anything while these dry conditions are ongoing.

The National Weather Service Office in Amarillo, Texas, said northwestern winds with gusts up to 35 mph, relative humidity in the teens, and extremely dry grasslands will keep the wildfire risk high through Saturday night.

Gusty winds and relative humidity below 20% are expected to continue into the weekend across the Central and Southern High Plains.