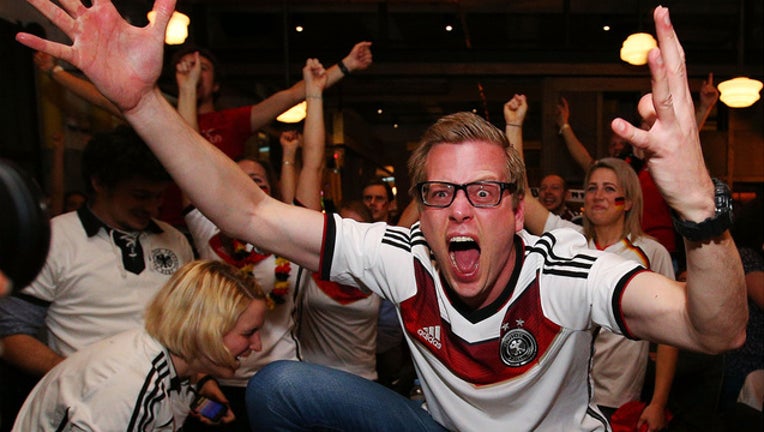 German fans at Hophaus celebrate the winning goal while watching the 2014 FIFA World Cup Final match between Germany and Argentina on July 14, 2014 in Melbourne, Australia. (Photo by Michael Dodge/Getty Images)

(FOX 26) - The World Cup is here and while it brings a ton of excitement and joy -- it can also present a scary affect on our health.

As fans across the world prepare for their national team to fight for the trophy, they should prepare for a possible trip to the hospital

The World Cup brings a rollercoaster of emotion and the risk of a heart attack is high.

The New England Journal of Medicine published a study that analyzed the rates of cardiovascular events around the Munich, Germany area during the 2006 World Cup.

It concluded that Germans' risk of ending up in the hospital for a heart attack or cardiac arrhythmia was 2.66 times higher on the days Germany played in the tournament.

"In any major sporting event, the very first thing we do is grab food high in fat and calories," says Dr. Tom Nguyen, a cardiovascular surgeon with Memorial Hermann Heart & Vascular Institute. "And then we add alcohol."

Dr. Nguyen says on top of this consumption, heart rates increase with the emotions of winning or losing a game. This can be very detrimental, especially when one has a preexisting heart condition.

"If we're consuming a lot of these foods in moderation and there are no preexisting heart conditions, it's less likely to have a cardiovascular event."

However, as Dr. Nguyen points out, many people aren't aware that they have a heart condition. Sometimes, they aren't even aware they're having a heart attack because they don't experience chest pain.

"The reality is a lot of people will have a heart attack and not have those symptoms."

Instead, people make experience subtle symptoms, like getting tired easily, shortness of breath, dizziness and or fainting. The symptoms people tend to dismiss.

So what does Dr. Nguyen recommend?

"Enjoy the game, but like all things in life eat drink smoke in moderation -- especially if you have a history of heart disease."

Also, if you have any signs or symptoms that seem unusual, "get to the hospital sooner than later."

FIFA Medical is even raising awareness about Sudden Cardiac Arrest at the tournament. The organization is highlighting the signs, emergency steps and prevention suggestions.

There's also a much more disturbing trend that can come with the World Cup. Some fans get violent -- even when their team wins.

According to research by Lancaster University criminologist Dr. Stuart Kirby, domestic violence rates increased significantly in England and Wales during the 2002, 2006 and 2010 tournaments.

The violent incidents didn't just occur during England losses either.

The study showed violent incidents increased by 38% when England lost, but also rose by 26% when they won.

A separate national research examining the 2010 World Cup echoed the Kirby findings  with domestic abuse reports up 27.7% when the England team won a game, and 31.5% when they lost.

It isn't all bad though, the tournament can also bring a baby boom!

Germany is known to have one of the lowest birth rates in Europe, but nine months after hosting the 2006 World Cup and finishing third overall, the country saw an almost 30% increase in births compared to the year before.

This isn't the only example of soccer euphoria leading to more babies.

We'll have to wait and see if the winning country or the Russians increase their population next year.