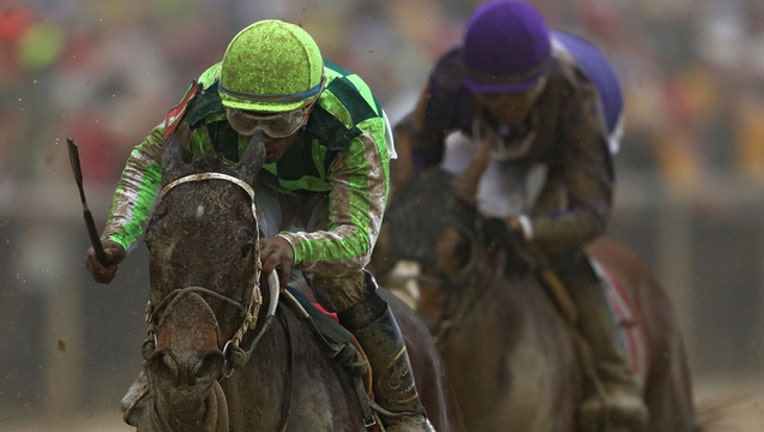 Horses race prior to the 143rd running of the Preakness Stakes at Pimlico Race Course on May 19, 2018 in Baltimore, Maryland. (Photo by Patrick Smith/Getty Images)

BALTIMORE (AP) -  War of Will bounced back from a bumpy ride in the Kentucky Derby to win the Preakness Stakes on Saturday, holding off a field that included a riderless horse that threw his jockey out of the gate and still finished the race.

Trainer Mark Casse got his first Triple Crown victory, with War of Will unbothered starting from the inside No. 1 post position for the second consecutive race. War of Will was interfered with in the Kentucky Derby, which led to first-place finisher Maximum Security being disqualified.

Bodexpress threw Hall of Fame jockey John Velazquez just out of the starting gate but still finished the race. An outrider tried to swoop in at the top of the stretch and corral Bodexpress, but the horse sped up and passed a few competitors near the finish line -- and kept going. Technically, Bodexpress gets a did-not-finish.

War of Will made a move around the final turn led by jockey Tyler Gaffalione and didn't relent down the stretch. Hard-charging late addition Everfast came in second and Owendale third.

An inquiry was briefly put up on the board at Pimlico Race Course but quickly taken down.

Casse, 58, entered a horse in the Preakness for the fifth time and came closest two years ago when Classic Empire finished second.

It's also a breakthrough for Gaffalione, who has become something of a rising star since being named top apprentice rider in 2015. Gaffalione, 24, was aboard War of Will for the colt's sixth consecutive race and came away with the biggest victory of his young career.

Bob Baffert-trained Improbable was beaten as the favorite for the second consecutive Triple Crown race.