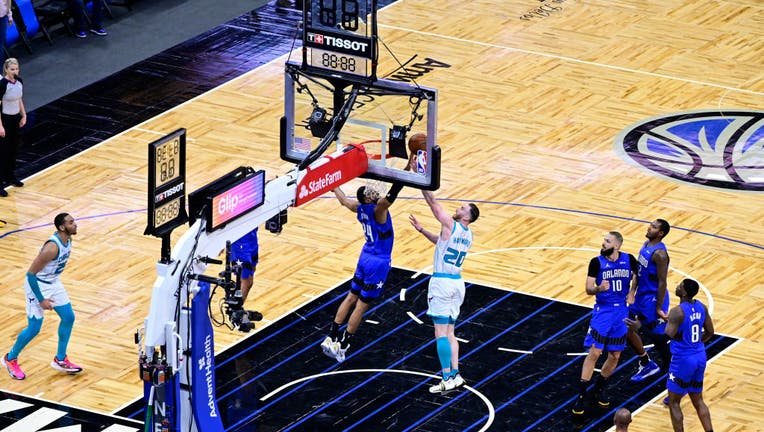 Gordon Hayward #20 of the Charlotte Hornets drives to the net as Khem Birch #24 of the Orlando Magic defends during the fourth quarter at Amway Center on January 24, 2021 in Orlando, (Photo by Douglas P. DeFelice/Getty Images)

Orlando snapped a two-game losing streak and bounced back from squandering a double-digit lead in the fourth quarter a night earlier in a loss to the Hornets.

On Monday, Orlando led by as many as 20 points in the third quarter and took an 11-point lead into the fourth before Charlotte made a charge. The Hornets closed within 101-94 and later 115-108, but the Magic were able to hold their division rivals off behind the stellar play of Vucevic. The 7-footer also had 12 rebounds for his 13th double-double of the season.

Orlando made a season-best 19 3-pointers, including seven in the third quarter. Evan Fournier hit 5 3s and scored 19 points. Orlando’s Dwayne Bacon had 15 points against his former team before leaving midway through the fourth quarter with an injury.

Aaron Gordon, who missed Sunday’s game with hip and back soreness, returned on Monday and sparked Orlando’s offense with his playmaking. He finished with 12 points, 11 rebounds and seven assists.

Anthony made 8 of 12 shots and 4 of 5 3-pointers and outplayed fellow rookie point guard LaMelo Ball. The No. 15 pick in the November NBA draft scored 10 points and made two 3-pointers in a third period that saw Orlando surge ahead by as many as 20 points. Ball, the No. 3 pick, had nine points and four assists, but missed all five of his 3-point shots.

Gordon Hayward, the hero of Charlotte’s 107-104 win a night earlier with his 39 points and a game-winning layup, finished with 24 points on Monday. Devonte Graham (21 points) and Rozier (24 points) each made four 3-pointers for Charlotte, which lost to the Magic for the fifth time in six meetings. The Hornets made just 11 of 38 3-point shots.

Charlotte built a 15-point lead in the first quarter, but Orlando responded with a 20-2 run to get back in the game. After a dreadful offensive start, the Magic made 13 of 21 shots and 5 of 9 3-pointers in the second quarter to take a 55-54 halftime lead.

Hornets: Host Indiana on Wednesday in the first of two meetings over three nights.