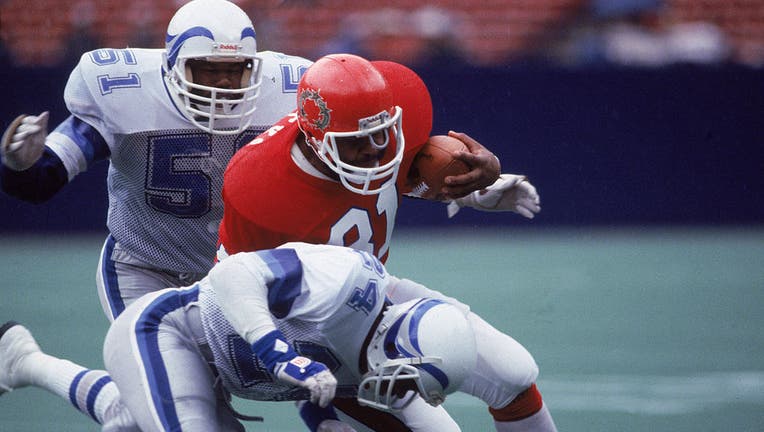 Quarterback Kyle Sloter led the way, passing for 266 yards and a pair of touchdowns as the New Orleans Breakers cruised to a 34-3 victory over the Tampa Bay Bandits.

The victory lifted the Breakers to 2-0 on the season and into a tie with the Birmingham Stallions for first place in the South Division. The Bandits dropped to 1-1.

Sloter struggled in his first game as Breakers quarterback, failing to throw a TD pass.

But on Sunday he broke into the TD column early by using his legs, pushing the ball into the end zone in the first quarter vs. the Bandits, putting his squad up early as N.O. seized momentum.

Sloter and the Breakers weren't done, pushing their edge to 14-0 when first TJ Logan shoved it in from five yards out. Then Sloter hit Jonathan Adams on this sweet 2-point conversion.

Shawn Poindexter saw Adams' catch and raised him another magnificent one on this back shoulder fade for another six.

The Bandits continued to have zero answers for Adams, who continued to add to his highlight reel in the third quarter. That set up a field goal, as the Breakers went up 24-3.

The Bandits tried to put a drive together early in the fourth quarter, but third-and-15 is never a great spot to be in, and when Jordan Ta'amu's receiver slipped, his pass was picked off.

That led to Sloter's second TD pass of the day — this time to Johnnie Dixon — making it 31-3, and the Breakers would cruise to the win from there.

After a wild back-and-forth battle, the Stallions took down the Gamblers, 33-28.

The game ball was hand-delivered by NASCAR's Tyler Reddick, who is in Birmingham for the highly anticipated race at Talladega Superspeedway on Sunday.

The Stallions wasted absolutely no time getting on the board in this one.

On the opening drive, Gamblers QB Clayton Thorson was picked off near midfield by Stallions CB Brian Allen, who took it 48 yards to the house to give Birmingham an early 7-0 edge.

Gamblers running back Mark Thompson gave Houston a much-needed boost, exploding up the middle for 41 yards.

The big gain put Houston in enemy territory, and Nick Vogel helped close the gap with this monster kick.

The Stallions got a taste of their own medicine when J'Mar Smith's pass was intercepted by Gamblers CB Will Likely and returned 63 yards for a touchdown, giving Houston a 9-7 advantage.

A short field goal from the Stallions kept the Gamblers within arm's reach headed into the second quarter, but things didn't stay that close for long.

On Houston's first drive of the second quarter, emerging star receiver Isaiah Zuber caught a 25-yard TD pass from Thorson to give the Gamblers the lead, 15-10.

Houston came up short on the 2-point conversion attempt, however, as Stallions linebacker DeMarquis Gates was all over Thorson.

Thorson was once again picked off near midfield which set up another short field goal for the Stallions.

Misfortune struck on the Stallions' following drive, as RB Victor Bolden fumbled the ball, which was recovered by Houston's Jamar Summers at Birmingham's 15-yard line.

The Stallions were able to keep the Gamblers out of the end zone, thanks to yet another clutch stop by Gates.

The Gamblers settled for three on the drive and took an 18-13 lead headed into halftime.

The Stallions cashed in on their first two possessions of the second half with back-to-back scores.

First, Smith connected with wideout Osirus Mitchell for a 34-yard TD to give Birmingham a 19-18 lead.

On the Stallions' following drive, RB CJ Marable scampered into the end zone to extend their lead, 26-18.

The Stallions started the fourth quarter the same way they started the third — with a big-time touchdown. First, Smith scrambled under pressure and picked up 16 yards for a crucial first down.

Then, Smith found WR Marlon Williams for a massive 65-yard TD pass to put the Stallions up 33-21.

Thorson launched one to WR Tyler Simmons, good for a 44-yard score to keep the Gamblers in it, 33-28.

Thorson converted on a huge fourth down for the Gamblers, picking up 12 yards on fourth-and-10.

Houston's luck ran out there, however, as Thorson was picked off for the third time.

Stallions linebacker Lorenzo Burns secured the interception to close out the game.

Stars hold off Maulers in a thriller

In a thrilling, back-and-forth affair, the Stars (1-1) held off the Maulers (0-2) in a battle of Pennsylvania rivals, earning their first victory of the season, 30-23.

The Stars looked for a strong start when Darnell Holland returned the opening kickoff all the way to Pittsburgh's 36-yard line.

But the Maulers held firm when Jaylon McClain-Sapp snatched a one-handed interception on fourth down.

Philly came up with a great defensive stop of its own, partly because of this massive hit.

Pittsburgh would end up settling for a field goal, taking a 3-0 lead.

Bryan Scott found Diondre Overton for the first touchdown of the game, as the Stars went up 7-3 early in the second quarter.

A short while later, Ahmad Dixon snagged this interception right in the chest. That set up a QB sneak by Scott, which gave the Stars a 14-3 lead.

Pittsburgh secured its first TD of the day courtesy of its defense, as a strip-sack quickly turned into points after McClain-Sapp scooped up the loose football and turned on the afterburners en route to the end zone.

McClain-Sapp's big play ignited the Maulers, who began stepping into their rhythm on the offensive end. Josh Love uncorked a pair of big-time throws in succession, the second which was a seed to tight end Hunter Thedford to help Pittsburgh take the lead.

Scott is still heating up. The Maulers' lead didn't last long, as Scott brought his troupe right down the field in response and dropped in a doozy of a dime to Maurice Alexander Jr. to put Philly back up, 21-16. The Stars took that edge into halftime.

Love clearly didn't want Scott to take all the spotlight. Check out this beautiful 37-yard TD pass to Bailey Gaither, which gave the Maulers a 23-21 lead.

The Stars came right back to regain the lead on another TD pass from Scott. And to make things even more entertaining, Philadelphia then pulled off the first 3-point conversion of the USFL's inaugural season, extending their edge to 30-23.

That score would hold up, as the Stars earned their first victory of the season.

Generals DE Kolin Hill came up with a huge play early in the opening quarter, sacking Panthers QB Shea Patterson as he stepped back to pass, getting the N.J. defense off the field on a crucial third down.

On the ensuing drive, the Generals used that momentum to get on the board with a short field goal.

Misfortune struck when Generals Luis Perez was picked off at midfield.

Panthers running back Cameron Scarlett got Michigan on the board with a short run on the following drive.

Just like that, the Panthers led 6-3 early in the second quarter.

The Generals regained the lead, 10-6, after RB Darius Victor punched it in for N.J. ahead of the halftime break.

The Panthers opened the second half with a hefty 15-play drive that highlighted their star power on both sides of the ball.

But the Generals' defense was restlessness and didn't let anything — or anyone — slip by, and it remained a four-point game as the final frame got underway.

Patterson led the Panthers downfield and into the red zone with less than two minutes to spare, as Michigan tried to pull off the comeback.

In the end, it wasn't enough to swing the game, and things ended there, 10-6.