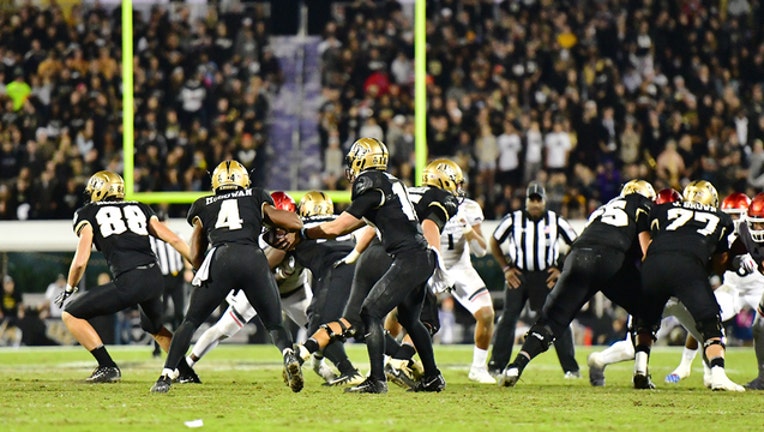 McKenzie Milton #10 hands the ball off to Taj McGowan #4 of the UCF Knights during the fourth quarter against the Cincinnati Bearcats on November 17, 2018. (Photo by Julio Aguilar/Getty Images)

Alabama, Clemson, Notre Dame and Michigan were at the top of the College Football Playoff rankings Tuesday night, marking the first time in the five-year history of the postseason system that the same teams held the first four spots for three straight weeks.

Unlike last week, there was a little movement in the top 10. Unbeaten Central Florida moved up two spots to No. 9. The Knights became the first team from outside the Power Five conference to be ranked in the selection committee's top 10.

Georgia remained No. 5, followed by Oklahoma at sixth. LSU remained seventh, Washington State held at 8 and Ohio State stayed at 10th, getting jumped by UCF.

"We said while UCF might not have the depth of talent of Ohio State, the committee thought they're playing more as an all-around team," Mullens said.

No. 11 was Florida, which could help the Gators secure a New Year's Six bowl bid. Penn State is 12th.

There does not seem to be a realistic path to the playoff for UCF. What about an unrealistic one? Maybe. Imbalanced conferences have set traps for playoff contenders that UCF athletic director Danny White could not have laid out any better.

There is a case to be made that there is literally no way UCF would be allowed in the playoff. The conspiracy theorist would say the selection committee has been given their Power Five marching orders and that's that. There is a glass ceiling over UCF no matter the chaos in the other conferences. The less cynical would say UCF's schedule, not as rigorous as the other top teams, would deservedly keep the Knights out even if the alternative is teams that have lost two or even three games.

CFP executive director Bill Hancock has often said there is no glass ceiling on the Group of Five teams. They just need aggressive and fortuitous nonconference scheduling. The example often give is Houston of the American Athletic Conference in 2016. The Cougars, coming off a Peach Bowl victory like UCF this season, beat two highly ranked Power Five teams with star quarterback that season - Oklahoma with Baker Mayfield and Louisville with Lamar Jackson. But they lost three conference games and didn't even earn a major bowl bid.

But a Group of Five team with those types of nonconference victories, plus a strong conference record and league title, would have a chance to make the final four.

UCF doesn't have those victories this season. Its game against North Carolina was cancelled by a hurricane, and the Tar Heels aren't any good, anyway. UCF did play and pound Pittsburgh in September and the Panthers have turned out to be a good enough to reach the Atlantic Coast Conference championship game against Clemson in two weeks.

The Panthers (7-4) are one of the keys that could help UCF pick the lock on the playoff.

Northwestern (7-4) of the Big Ten and Utah (8-3) of the Pac-12 have also clinched spots in their respective conference championship game, and Texas (8-3) could do the same in the Big 12 on Friday by beating Kansas.

UCF needs all these teams to win their conference titles and Alabama to win the Southeastern Conference at 13-0. At that point Notre Dame would likely reach the playoff no matter what it does against Southern California this weekend. Let's just assume the Irish win and are 12-0 and in.

- Washington (8-3) after the Huskie beat Washington State in the Apple Cup.

That would leave Clemson 12-1, with a loss to Pitt - the team UCF crushed.

Assuming Clemson gets a mulligan and gets into the playoff, every other team would have at least two losses. At that point, wouldn't the committee have to give UCF a chance?

Follow Ralph D. Russo at www.Twitter.com/ralphDrussoAP and listen at https://www.podcastone.com/AP-Top-25-College-Football-Podcast