Despite some weather delays, UCF football fans stuck out the elements for the season-opener against Boise State.

ORLANDO, Fla. (AP) - Isaiah Bowser rushed 172 yards, including the go-ahead touchdown with a little over four minutes remaining, and UCF rallied to beat Boise State 36-31 on Thursday night in a game that began almost three hours late because of lightning-caused delays.

Boise State stormed out to a 21-0 lead before UCF cut the margin to 24-14 by halftime and scored two touchdowns in the third quarter to take its first lead.

After throwing a pick-6 in the first quarter, Dillon Gabriel led scoring drives to end and begin the half. He threw for four 318 yards and four touchdowns, while being picked off twice by Tyric LeBeauf. Jaylon Robinson made six catches for 140 yards and a score. 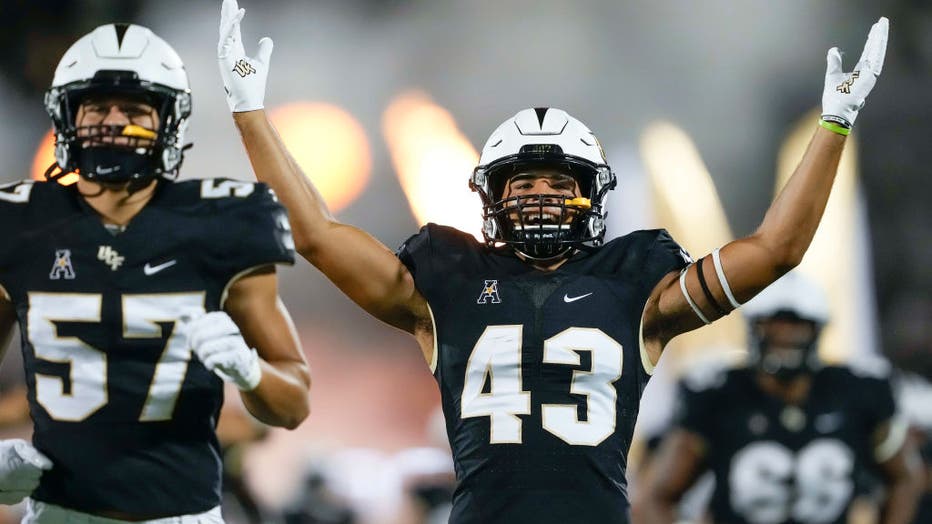 ORLANDO, FL - SEPTEMBER 02:UCF Knights defensive back Zach Rodriguez (43) leads the team on the field during the football game between the UCF Knights and Boise State Broncos on September 2, 2021 at Bright House Networks Stadium in Orlando, FL. (Phot

Bachmeier ran the Broncos’ offense proficiently in the first half, throwing for 172 yards and a touchdown. He finished with 263 yards passing, two scores and an interception.

College athletes are now allowed to make money off of their names and faces and we're getting a fist look at this locally ahead of the UCF-Boise State game.

With 4:16 remaining in the fourth, Gabriel scrambled left for the pylon and was hit out of bounds, causing him to be down for several moments. He did re-enter the game.

Boise State: Last season, the Broncos ranked No.2 in the FBS on third-down conversion defense and in the first half against the Knights they held UCF to 1 of 6.

UCF: Against the Broncos, the Knights committed five penalties for 35 yards in the first half alone. Last season, UCF surrendered the second-most penalties in college football.