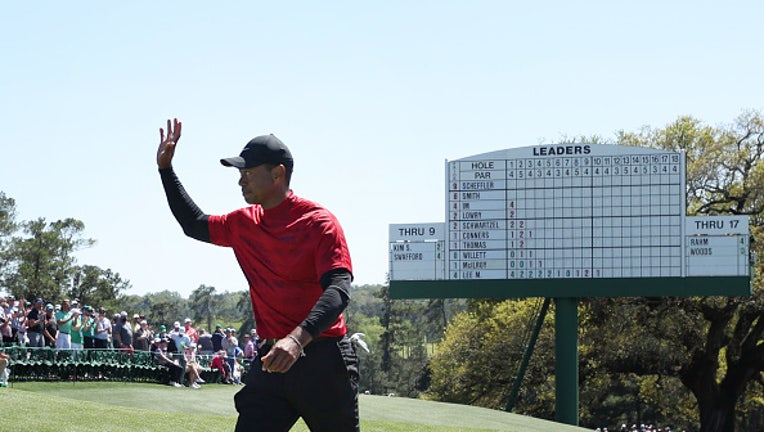 AUGUSTA, GEORGIA - APRIL 10: Tiger Woods waves to the crowd on the 18th green after finishing his round during the final round of the Masters at Augusta National Golf Club on April 10, 2022 in Augusta, Georgia. (Photo by Gregory Shamus/Getty Images)

The Masters patrons filled in every nook and cranny around the 18th green, awaiting the appearance of the man in red.

A scene that’s been so familiar to Tiger Woods on so many Sundays at Augusta National, but this one was different.

It wasn’t even 3 o’clock on the warm, sunny afternoon in east Georgia. Over on the adjacent first hole, leader Scottie Scheffler and closest pursuer Cameron Smith had just teed off in the final group.

Hunched over and limping noticeably, Woods climbed the deceptively steep hill leading up to the green as the fans slowly rose to their feet, the roar building as they saluted a remarkable comeback if not a fairy tale of a weekend.

"Way to hang in there, Tiger!" a man standing back in the crowd belted out. 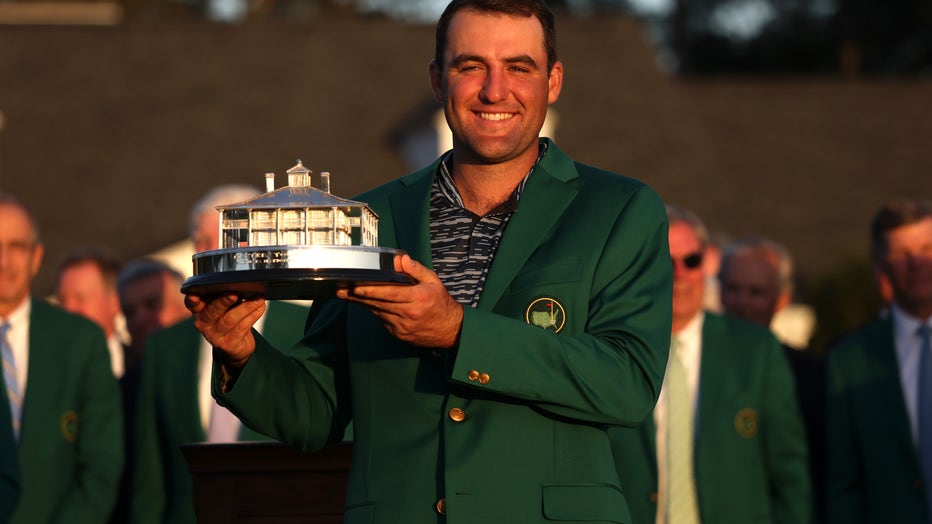 From a strictly golfing viewpoint, this was hardly the Woods that so many remembered. The guy who’s won five green jackets, the last of them just three years ago. The guy who’ll go down as one of the greatest to ever play the game, even if he never strikes another shot. (Don’t worry, he’s not done.)

This Woods, the one hobbling on a rebuilt right leg that he could’ve lost in that horrific car crash 14 months ago, closed with back-to-back 78s that were the worst scores of his Masters career.

He even had to take a left-handed swing at the 13th after knocking his ball onto the pine straw behind the green, right up next to an azalea.

His battered body simply ran out of steam after an electrifying 71 on Thursday, when Woods made his return to competitive golf for the first time in more than 500 days.

He grinded out a 74 on Friday, ensuring he would make the Masters cut for the 22nd time in a row.

There was nothing left in the tank for the weekend.

Still, it was a gratifying experience, one that Woods clearly didn’t regret putting himself through even if he didn’t come close to winning a record-tying sixth green jacket.

"This tournament has meant so much to me and my family," Woods said. "This is where all the great champions have ever played. They have walked these grounds."

That Woods was able to walk the course again — for four days, no less — was a feat in itself.

After his wreck in February 2021, doctors told Wood that his shattered right leg might have to be amputated. They managed to save it, but he was confined to a hospital bed for three months. He’s still got screws and rods holding the bones in place. 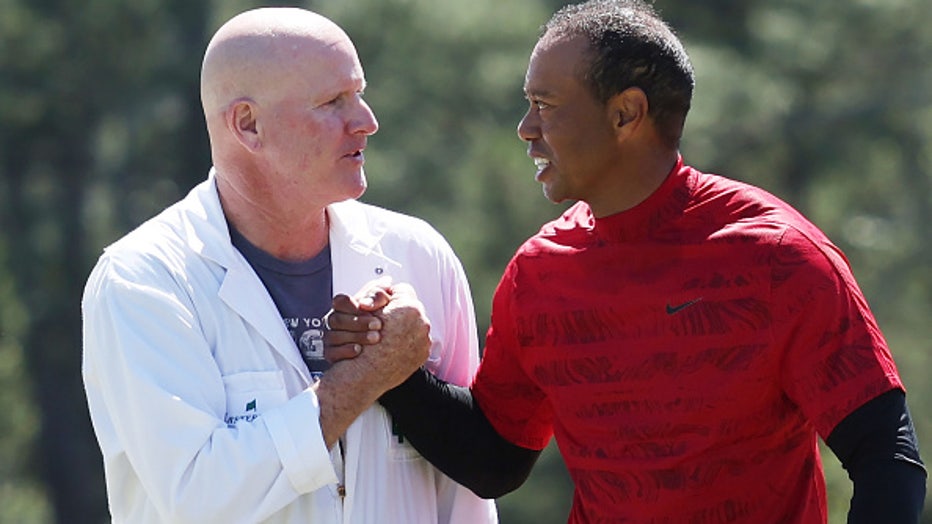 AUGUSTA, GEORGIA - APRIL 10: Tiger Woods and caddie Joe LaCava shake hands on the 18th green after finishing their round during the final round of the Masters at Augusta National Golf Club on April 10, 2022 in Augusta, Georgia. (Photo by Gregory Sham

Woods walked Augusta National with a limp that got more and more noticeable, sometimes using a club as a walking stick to help him get around.

Most telling, he couldn’t bend all the way over to read putts on Augusta’s tricky greens, which may explain why his stellar touch with the short stick seemed to abandon him on the weekend.

But excluding all the tournaments he’s won — especially those 15 major championships — this felt like his greatest achievement in golf.

"For not winning an event, yes. Yes, without a doubt,′ Woods said. "I don’t think people really understand. The people who are close to me understand. They’ve seen it. Some of the players who are close to me have seen it and have seen some of the pictures and the things that I have had to endure. They appreciate it probably more than anyone else because they know what it takes to do this out here at this level."

Everyone realizes how much Woods still means to the game, even if he is surely in the twilight of his career at age 46.

"You just pull so hard for him," said Harold Varner III, who joined Woods and Cameron Champ to make this the first Masters with three Black players. "Obviously, he’s great for the sport. If he’s around, we’re going to make a lot of money."

Woods told Sky Sports that he plans to play the British Open at St. Andrews in July. He isn’t sure about the next two majors: the PGA Championship, set for May 19-22 at Southern Hills, or the U.S. Open at Brookline in June.

"It’ll be just the big events," Woods told Sky. "But I am looking forward to St. Andrews. That is something that is near and dear to my heart. I’ve won two Opens there, it’s the home of golf. It’s my favorite golf course in the world, so I will be there for that one."

"See you down the road," his caddie, Joe LaCava, shouted to media members gathered outside the clubhouse, waiting to speak to his boss.

Wherever that is, Woods plans to step up his rehab so his body has a better chance of holding up over four grueling days.

"We’re excited about the prospects of the future, about training, about getting into that gym and doing some other stuff to get my leg stronger, which we haven’t been able to do because it needed more time to heal," he said. "I think it needs a couple more days to heal after this, but we’ll get back after it."

While Woods spoke, a roar went up that sounded like it came from way down in Amen Corner.

Woods loves those roars. He hadn’t heard them since his victory in 2019. The following year, the tournament was played in November with no fans because of the pandemic. Last year, of course, playing a golf tournament was the furthest thing from Woods’ mind. 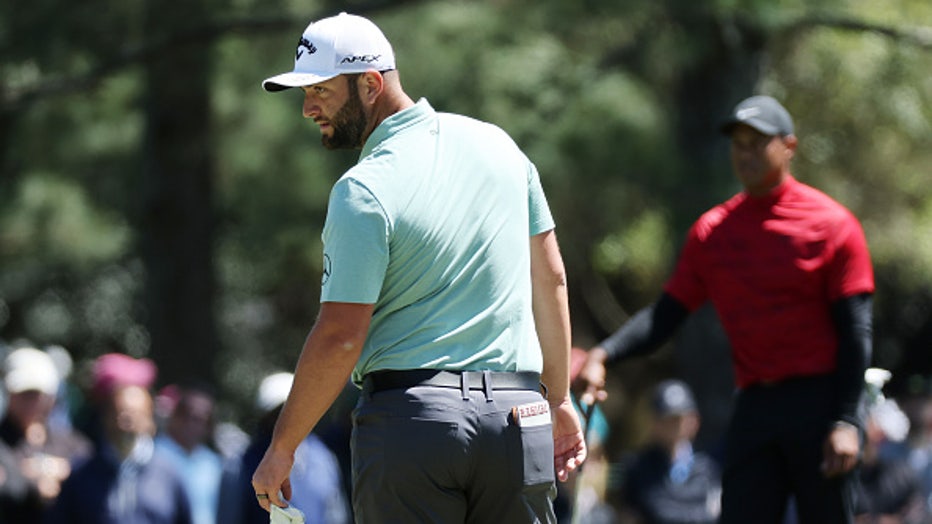 AUGUSTA, GEORGIA - APRIL 10: Jon Rahm of Spain lines up a putt on the eighth green as Tiger Woods looks on during the final round of the Masters at Augusta National Golf Club on April 10, 2022 in Augusta, Georgia. (Photo by Gregory Shamus/Getty Image

RELATED: A look at the long road back to the Masters following car crash

Woods hopes to create a few more of them before he’s done.

On this Sunday, he had to be content with the cheers that erupted one last time after he tapped in a short putt at the 18th hole for a 13-over 301 — his worst Masters performance as a professional by eight strokes.

Woods finished a whopping 23 shots behind Scheffler, who claimed his first major title. That matched the largest margin between the winner and Woods in any major championship, which previously occurred at the 2014 British Open, when he was blown away by Rory McIlroy.

He eclipsed his biggest blowout at the Masters, which was 19 strokes behind Dustin Johnson two years ago, when Woods was the defending champion.

As Woods doffed his cap and headed off to the clubhouse, the crowd around 18 began to disperse.

It was time to go watch the players who actually had a chance to capture the green jacket.