Gramática: With fans and Brady, Bucs have a fighting chance at repeat

Martín Gramática admits its hard to repeat a Super Bowl win, but if anyone has the recipe, it’s Tom Brady. The Super Bowl champion kicker joined Good Day Tampa Bay to give his perspective ahead of Game 1.

TAMPA, Fla. - So, you are here for a preview? Sure you want to move on that quickly?

After all, you waited 18 years for a second championship – 12 losing seasons, 15 starting quarterbacks, and five coaching changes.

Might I suggest a quick REVIEW to first bask in the glow of 2020. 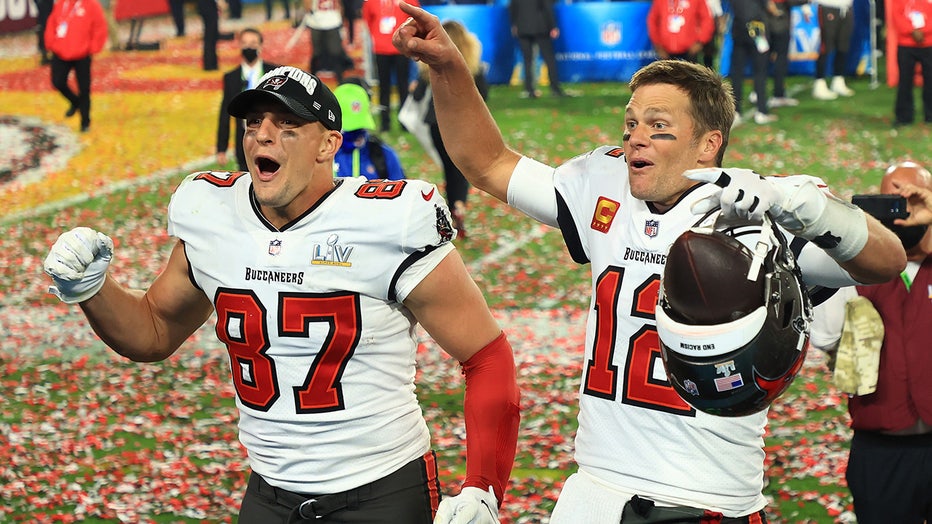 To summarize the 2020 Tampa Bay Buccaneers, think of hopping on a roller coaster ride – the typical thrilling drops and inversions of an NFL season. Now imagine conducting a chemistry experiment amid the twists and turns, which is essentially what a new crop of players in a COVID-crippled offseason amounted to.

The Bucs loaded onto the coaster Week 1 with all of their supplies; test tubes and vials, beakers and balances – and don’t forget safety goggles! But once the harness locked into place and the wheels started moving, no one was sure what to expect. That first month of the season was the coaster’s herky-jerky climb up the first peak, and sadly a couple of test tubes got broken.

At the midway point, the Bucs had navigated the first few bends and bumps pretty well.  At 6-2 in the standings, Bruce Arians is thinking, "It’s time to whip out the potassium chlorate and have a little fun!"

However, the month of November knocked the Bunsen burner sideways and this renegade coaster was experiencing a little spontaneous combustion. Fortunately by December, Professor Brady had tamped down the flames, and as the coaster came accelerating into January and the postseason approached, the measurements and mixes seemed to have jostled into place as the coaster appeared homeward bound.

The playoffs proved the chemistry experiment was a success after visits to DC, New Orleans, and Green Bay. As the coaster docked in Tampa, the concoction percolating to perfection, the Chiefs found out the hard way what exactly the experiment produced: Avocado tequila. 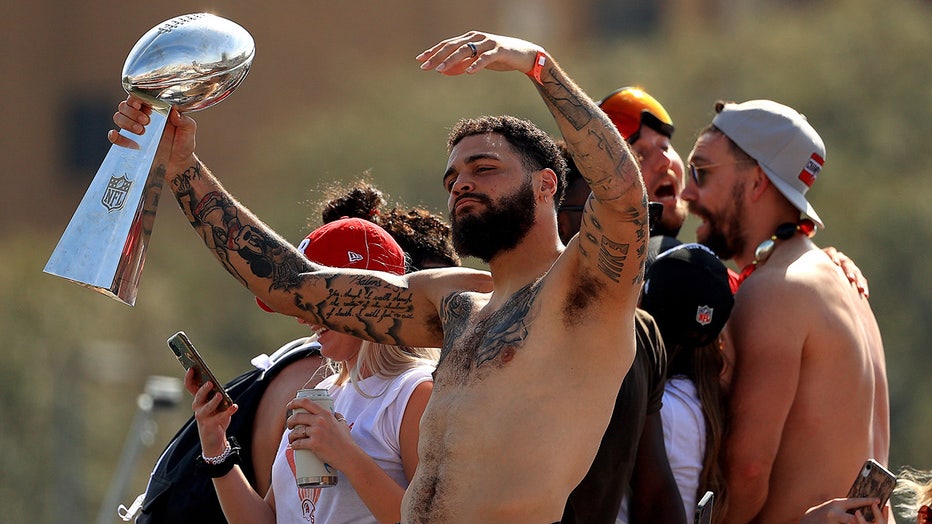 Mike Evans celebrates the Bucs' Super Bowl LV victory with the Vince Lombardi trophy during a boat parade through the city on February 10, 2021. (Photo by Mike Ehrmann/Getty Images)

The question is not, CAN they do it again? That answer is clearly, yes.

The question is WILL they do it again? After all, there is a reason only one team has been able to repeat over the last two decades -- it’s hard! Good thing the last quarterback to do it is the same fresh-faced kid wearing number 12 for the Bucs now.

As mentioned in my muddled and meandering introduction into "roller coaster chemistry," team chemistry is the biggest piece. General Manager Jason Licht made sure to keep the same ingredients. He brought back every single starter, which is unheard of following a Super Bowl championship.

If complacency is the enemy of success, then that is the Bucs’ greatest threat in 2021. It’s also something that Bruce Arians has warned about and Tom Brady is seemingly incapable of. Everyone else seems to be singing out of the same hymnal; last year was last year. 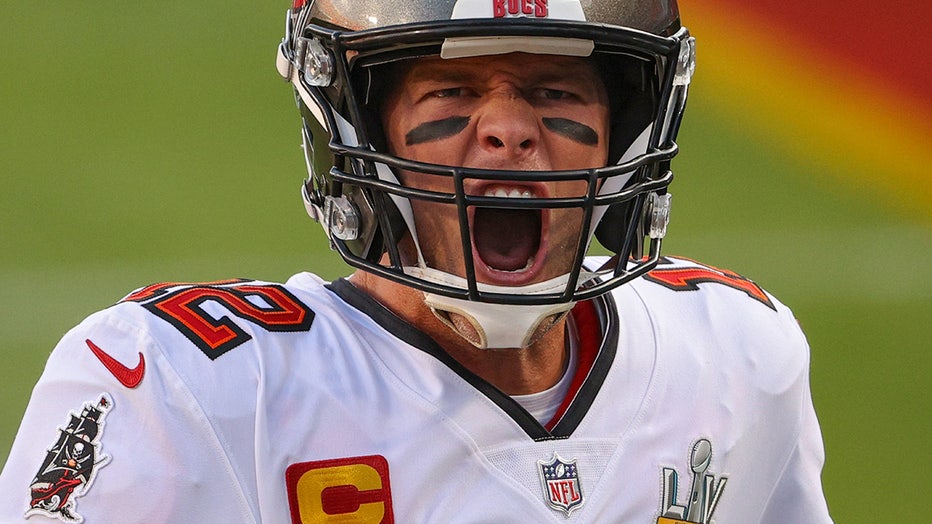 Tom Brady yells as he takes the field against the Kansas City Chiefs in Super Bowl LV. (Photo by Patrick Smith/Getty Images)

You may never ask a woman her age, true.  Also true, we may never stop discussing Tom Brady’s age. It’s 44 in case you missed the neon sign above his head. This is his 22nd season – half of his life has been spent in the NFL (and to think, for most the NFL stands for ‘Not For Long’). The Bucs’ current crop of rookies is made up of 22 year olds, which should make you chuckle – or cry.

Clearly the numbers that define Brady’s legacy are the ones earned between the white lines. Most passing yards, completions, touchdowns, Pro Bowls, Super Bowls. And lest we forget his age, he’s the oldest player to ever win Super Bowl MVP.

The only fade in Brady’s game is to Mike Evans in the back corner of the end zone. Last season was one of his best yet, both individual and team success. He threw for 4,633 yards, completed 65.7% of his passes, 40 for touchdowns, and another 10 TD’s added in the postseason.

All of this while playing with a torn ligament in his knee!

Offseason knee surgery has Brady feeling 43 again, which is to say 23 for most of us. He also starts the season with a command of the offense and a comfort with the players he shares the huddle with.

Father Time may be pursuing Brady like a wild-eyed edge rusher foaming at the mouth, but there is no reason to believe Brady won’t step up in the pocket once again in 2021 and deliver another dart into a tight coverage. 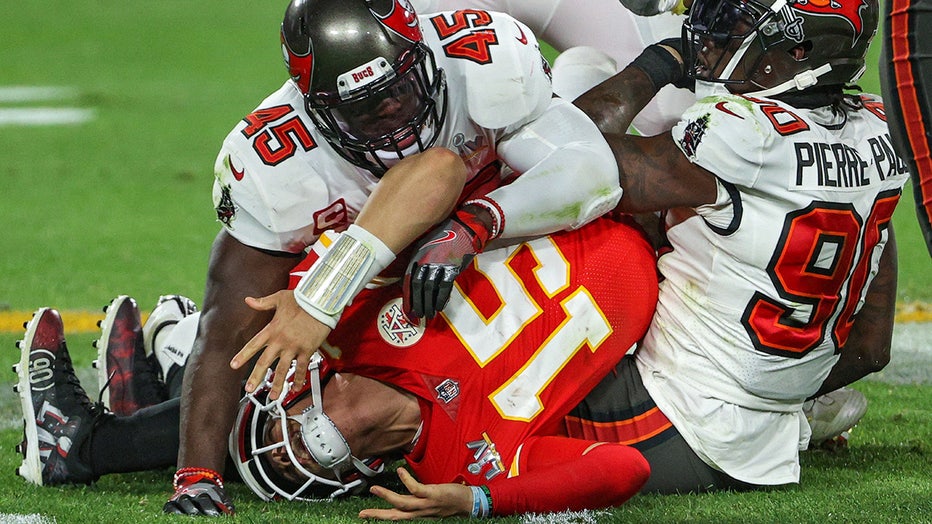 Patrick Mahomes of the Kansas City Chiefs is tackled by Jason Pierre-Paul and Devin White of the Tampa Bay Buccaneers in the fourth quarter during Super Bowl LV. (Photo by Patrick Smith/Getty Images)

Unlike last year, there is no flying under the radar for Todd Bowles’ defense in 2021. Not when you are the only defense all season to keep Patrick Mahomes and that top-ranked Chiefs ‘O’ out of the end zone – and doing it in the Super Bowl.

The Bucs’ defense returns all starters for a third straight season. Veteran stability up front with Jason Pierre-Paul, Shaq Barrett, Ndamukong Suh, and Vita Vea. The best inside linebacking tandem for a second straight year in Devin White and Lavonte David. The once "young puppies" of the secondary have earned a tougher nickname now, "The Grave Diggers."

While it would seem immodest to go on boasting about defensive talent, you are not reading this for modesty’s sake. One of the most intriguing mysteries of the defense may just be rookie linebacker Joe Tryon-Shoyinka.

If the preseason is any indication the Bucs might have outfoxed the 31 other teams in the draft, selecting this former Washington Husky with the final pick in the first round. He’s got speed, size, and no pressure to perform - the Tryon-fecta!

The 44-year-old is a little hoarse after barking signals all morning, but his knee is not giving him any problems.

The owners finally got their way and fans are not complaining. Yay! Another game! The NFL voted to expand to an 18-week season, which means 17 games instead of 16. Which, for all you pewter faithful, means predicting a 16-0 season will reveal more than just bias.

Eighteen weeks of the regular season will take its toll, especially for the more veteran Buccaneers. This is where having Bruce Arians as a head coach is a big benefit. Arians is a big believer in veteran days off and investing into a sports science. The season is an endurance race and Arians knows how to pace his players.

Another reason 17 games will not be a stumbling block for this team, is because their schedule is EASY!

At least according to Sporting News, the Bucs’ strength schedule ranks 29th. This ain’t college football – no committees will consider S.O.S. before playoff voting.

The quantity of games is not the greatest concern for this team, but rather the quantity of prime-time games. Nationally televised night games were a problem for the Bucs in 2020, squeaking out just one of the four regular season primetime tilts. This season the Bucs have a franchise-most five primetime games – two Thursdays, two Sundays, and one Monday.

Why the Bucs will repeat as Super Bowl champs 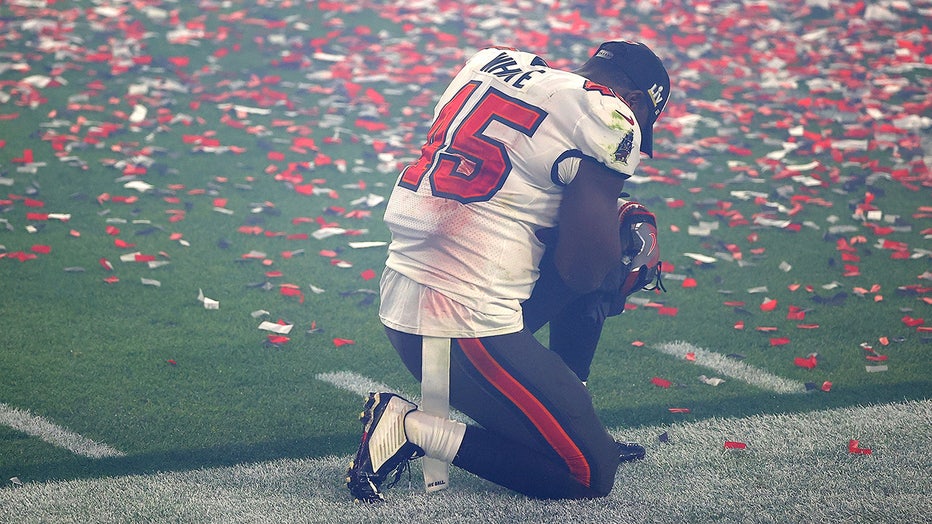 Devin White takes a moment to himself after winning Super Bowl LV against the Kansas City Chiefs. (Photo by Kevin C. Cox/Getty Images)

If your marquee man goes down, chances plummet, so health is always a top concern. The Bucs are stacked on both sides of the ball, but they can’t reach the Promised Land without Tom Brady. I believe Brady is the only singular player on the Bucs roster you can say that about.

The defensive equivalent is Devin White but I think the other 10 on defense could hold the line. So Brady has got to stay healthy. Duh.

Let’s scope out the competition.

The NFC South lost two future Hall of Famers in the offseason; Drew Brees (retired) and Julio Jones (Titans) – which is good news for the Bucs. Atlanta will be better because, well, how could they be much worse? Former Gator Kyle Pitts is good enough to help the Falcons forget about Julio.

The Panthers should be marginally improved with the return of Christian McCaffrey, but not winning record-type improvement.

The Tampa Bay Buccaneers celebrated their Super Bowl win with a boat parade through downtown Tampa as thousands of fans watched on boats and on land.

So the NFC South comes down to the Saints and Bucs, yet again. Jameis Winston earned the start in New Orleans, but it can only be assumed that Jameis will still do Jameis things. That means win a few games single-handedly, and also pad The Grave Diggers’ interception total.

The Bucs are clearly the best team in the NFC South.

So, book that boat parade mid-February, get the scuba team ready to recover submerged trophies – and don’t forget the avocado tequila.

What's new for fans at RayJay this season

Raymond James Stadium will offer new food and drink items, many from area favorites, when the Super Bowl-winning Buccaneers take the field this fall.