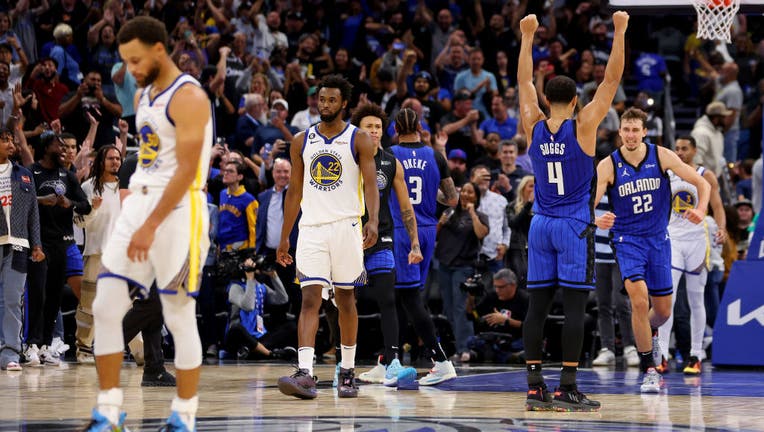 ORLANDO, FLORIDA - NOVEMBER 03: Jalen Suggs #4 of the Orlando Magic reacts to wining a game against the Golden State Warriors at Amway Center on November 03, 2022 in Orlando, Florida. NOTE TO USER: User expressly acknowledges and agrees that, by down

ORLANDO, Fla. (AP) - Jalen Suggs scored nine of his 26 points in the final two minutes, and the Orlando Magic rallied from a 16-point deficit in the second half to beat the Golden State Warriors 130-129 on Thursday night, handing the defending NBA champions their fourth straight loss.

Stephen Curry had 39 points and nine assists for the Warriors. Klay Thompson added 27 points, but missed a jumper at the buzzer.

Rookie Paolo Banchero had 22 points and eight rebounds for the Magic, who shot 53.8% from the field and won for only the second time this season. Franz Wagner finished with 19 points and Chuma Okeke came off the bench for 16.

The Warriors fell to 0-5 on the road.

They led 73-57 after a couple of 3-pointers by Thompson midway through the third quarter. Wagner answered with a 3-pointer and Banchero scored 12 points in the remainder of the period to help Orlando reduce the lead to 98-96 entering the fourth quarter.

A 3-pointer by R.J. Hampton put the Magic up 113-104 with 7:20 remaining, but Curry scored seven straight points to get the Warriors back in it.

Warriors: The Warriors have lost five straight in Orlando. ... A decision on whether to withhold players from Friday night's game at New Orleans, the team's second road back-to-back in seven days, will be based on Thursday night's minutes, according to coach Steve Kerr. Thompson did not play Sunday at Detroit. ... G/F Andre Iguodala (hip) and G Donte DiVincenzo (hamstring) remained inactive.

Magic: The Magic shot 46 free throws to the Warriors' 15. ... G Terrence Ross (knee) missed his first game of the season. G Cole Anthony sat out a fourth game with a torn right oblique. ... G Markelle Fultz (fractured toe) has yet to play this season and is not practicing yet.

Warriors: At New Orleans on Friday.