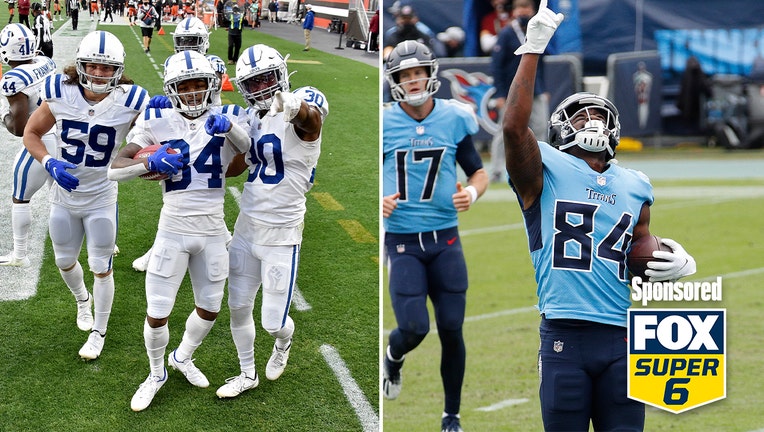 LEFT: Isaiah Rodgers #34 of the Indianapolis Colts celebrates with teammates after returning a kickoff for a touchdown in the third quarter against the Cleveland Browns at FirstEnergy Stadium on October 11, 2020 in Cleveland, Ohio. (Photo by Jason Mi

Nashville is where the stars play. Nashville can make a lot of things feel bigger. And Nashville- on this Thursday night- is where the NFL’s AFC South main showdown will take place under the lights.

That’s where the hometown Tennessee Titans will host the Indianapolis Colts (8 p.m., FOX) trying to take a two game lead in the division that will go a long way to setting the stage for the season’s second half.

And being able to predict the big events of this game could help you win $25,000 in FOX’s Super 6 contest. Just download the free app, answer six questions correctly and you could win up to $25,000 while watching football. It’s that simple.  Here’s the questions and how to look at it?

What will the last scoring play of the first half be?
The choices are: Titans TD, Titans FG, Colts TD, Colts FG, Any other score or no score

Here is the process of elimination when it comes to Tennessee – they are a high scoring team, so it is unlikely that you will see a half that ends scoreless. They tend to score touchdowns because the kicking game of Stephen Gostkowski has been so shaky. So if you believe that, a Titans touchdown is likely the way to go. On the flip side, the Colts have kicked five first half-ending field goals out of eight games. Just keep it in mind.

How will the first TD of the 3rd quarter be scored?
The answers are Titans rushing, Titans passing, Colts rushing, Colts passing, any other way (which includes special teams) and no touchdowns.

The Colts have not scored the first points of the second half in the last four games. The Titans, meanwhile, were able to score the first touchdown of the second half on an 63-yard fumble return for a touchdown by Desmond King II. Again, the no touchdowns seem an unlikely winner. Make sure to make your choice by playing the FOX Super 6 for Thursday’s game. It’s easy, it’s free and you could win $25,000 of Terry Bradshaw’s money.

On Sunday, both didn’t exactly light the scoreboard on fire. Rivers threw for 227 yards against the Baltimore defense and has broken 300 yards passing just once in the last seven games. Tannehill hasn’t broken 250 yards passing in six of eight games to this point, including 158 yards on Sunday. In other words, don’t expect a gunslinger showdown.

How different players will score a touchdown in the game?
The options are 1-2, 3, 4, 5 6+, or none.  Derrick Henry is the dominant force in this game and most of Tennessee’s attack will focus on him. Indianapolis will have to be more creative and losing Marlon Mack for the season has really hindered the Colts running game.

How many total points will be scored in the game?
The choices are 40 or less, 41-45, 46-50, 51-55, 56-60, and 61+. The Titans win on Sunday was the first game not to break into the 50s since Week 1’s 16-14 win in Denver. The Colts offense has been tough to get a gauge on- they win shootouts, then follow it up with lackluster performances like Sunday. In other words, if this game gets into a high shootout, then it probably favors the Titans.

Choose team to win & by how many points.
The Titans consecutive losses sent some alarms out, but the way they were able to maul the Bears feeble offense may have shown a blueprint for what may take place on Thursday night. The Colts don’t have the amount of weapons to keep up with the Titans. If Tennessee protects the football, they could win this game by double digits.

You can catch up the $25,000 if you are able to win Thursday’s Super 6 jackpot. Don’t forget to download the FOX Super 6 app and take your chance at winning some of Terry Bradshaw’s money.