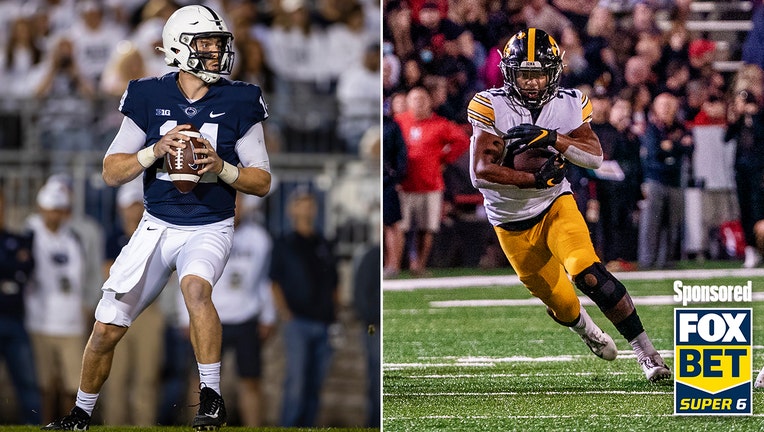 The biggest game in America this weekend takes place late on Saturday afternoon in the nation’s heartland.

Say what you want about the Big Ten and how it may end up eating its own in the weeks to come with as many as five potential College Football Playoff contenders. But when No. 4 Penn State and No. 3 Iowa meet each other for Big Noon Saturday (4 p.m. ET on FOX), it will be an epic showdown with much on the line.

Here are the six questions for Saturday’s contest.

What will be the total points scored in the first half?

Defense could rule the day. Iowa is second in the nation in scoring defense, allowing 11.6 points per game. Penn State ranks third at 12.0 PPG. Add some big-game nerves to this and you will see a low number.

Which team will have the longest rushing play and how long will it be?

The options: Penn State, Iowa, Tie with ranges from 0-51+

The longest run by a Lions runner to this point was 44 yards was by Keyvone Lee. Noah Cain has some speed as well. Tyler Goodson is the Hawkeyes leader at 56 yards. But with these defenses, don’t expect the breakaway.

Which team will have the most rushing yards and how much will they have?

Both teams are in the same ballpark when it comes to rushing yards. Penn State averages 132.6 while Iowa is around 126 yards per game. The difference could be the Iowa defense, which has allowed only 87 per game.

Which team will have the most passing yards and how much will they have?

The options: Penn State, Iowa, Tie with ranges from 0-326+ yards

If you want a great story in this college football season, Sean Clifford might be it. The embattled quarterback for the Nittany Lions has been stellar, averaging 286 passing yards per game. Iowa’s defense is stingy against the air attack, but Clifford and Jahan Dotson are serious playmakers.

Which team will have the most offensive yards and how much will they have?

The options: Penn State, Iowa, Tie with ranges of 476+

The offensive numbers for Iowa’s standouts are not blow-you-away good. But Iowa QB Spencer Petras protects the football and Goodson can make defenses miss. Again, this should be close. But Iowa has a better chance of a balanced attack and their defense tips things in their favor.

Which team wins and by how many?

The options: Penn State or Iowa with Options from 1-17+

The Hawkeyes defense is the most impressive Penn State will see the rest of the way. It has the ability to humble the Lions' pedestrian ground game. Can Clifford’s arm overcome all of that? That is a lot to ask on the road.

Download the FOX Bet Super 6 app now to predict the outcomes of the biggest events in sports, and you could win thousands of dollars absolutely for free each and every week. Just download and play!