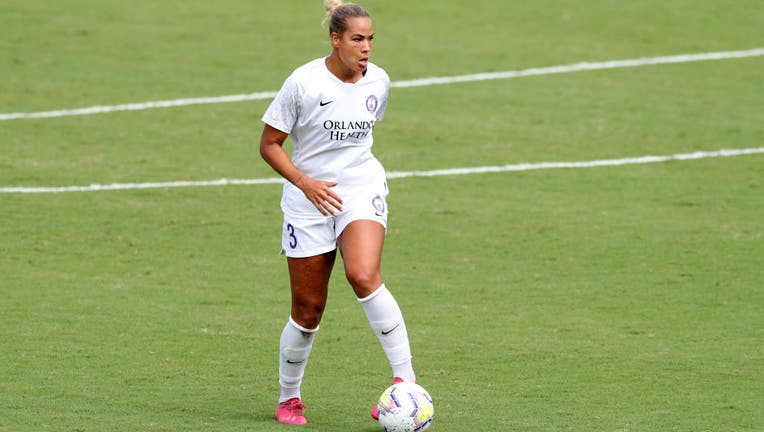 Toni Pressley #3 of the Orlando Pride plays the ball during a game between Orlando Pride and North Carolina Courage at Sahlen's Stadium at WakeMed Soccer Park on September 19, 2020 in Cary, North Carolina. (Photo by Andy Mead/ISI Photos/Getty Images)

ORLANDO, Fla. - Ahead of the 2021 National Women’s Soccer League (NWSL) season, Orlando Pride has signed defender Toni Pressley to a one-year contract with the option for an additional year.

"Toni is an amazing person who I’m delighted we have re-signed to play with the Pride. She possesses many top level skills and attributes that can serve us well as we aim to bring success to the team," Orlando Pride Head Coach Marc Skinner said. "In addition to her on-field talent, her influence in the locker room and the respect she has from everyone at the Club makes her an excellent fit to help us achieve our aspirations."

Pressley, 30, has been a member of the Pride since the Club’s inaugural season in 2016. A native of Melbourne, Fla., Pressley has totaled 90 appearances across all NWSL competitions, 57 of those coming with the Pride. A veteran presence during the 2020 Fall Series, Pressley led the Club in blocks (4) and passing accuracy in the defensive half (87.8%) over the team’s four matches, while finishing second in clearances (24).

Throughout her five-season tenure in Orlando, the 5-foot-11 center back has totaled three goals and leads the Club all-time in blocks (36) and clearances (218). Fans interested in becoming a 2021 Orlando Pride Season Ticket Member can find more information at orlando-pride.com or by calling (855) ORL-CITY.