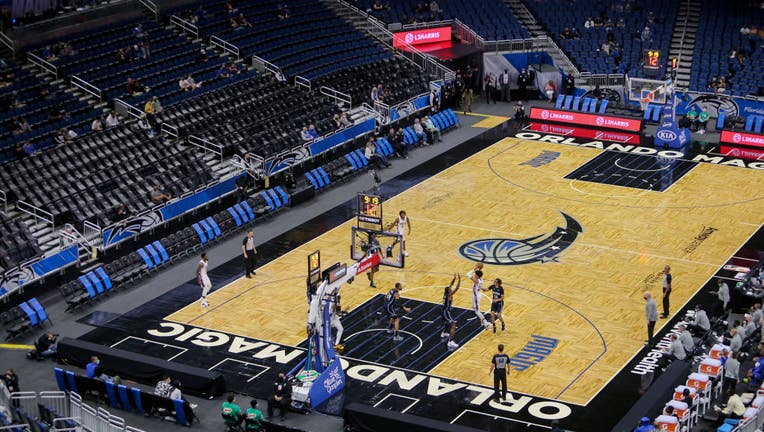 ORLANDO, FL - DECEMBER 31: Empty seats due to Covid-19 restrictions are seen during the Philadelphia 76ers against the Orlando Magic NBA basketball game at Amway Center on December 31, 2020 in Orlando, Florida. NOTE TO USER: User expressly acknowledg

ORLANDO, Fla. - The Orlando Magic were back on the court against the Atlanta Hawks, following Monday’s COVID-19 suspension.

"Our spirit and our love of competing and playing with joy of the game, that won’t change," Magic head coach Jamahl Mosley said on Wednesday.

The man leading the Magic said it's business as usual. We asked about concerns amid COVID-19, but Coach Mosley wouldn’t say much — only that they’re moving forward as best they can.

He said they’re working with the information as it’s relayed to them, making changes as needed.

Six Magic players are under COVID-19 safety protocols. On Monday, the Magic signed two more players thanks to the NBA’s hardship rule. The rule allows teams to exceed the 15-man roster if multiple players are out with an illness.

But overall, it’s about doing what they can on the court and the team is rolling with the punches.

"You compete, and you play for one another as you step in between those lines. That’s what we continue to talk about," Mosley said.

The NBA suspended two more games on Wednesday.NBA commissioner Adam Silver told ESPN on Tuesday that he has no plans on halting the season.