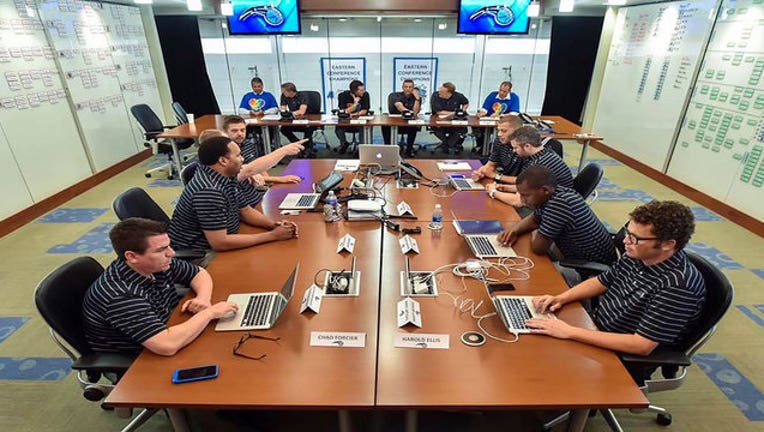 Ibaka has been one of the league's top defenders, but his offensive production has dipped. He averaged career highs of 15.1 points and 8.8 rebounds in 2013-14, but those numbers fell to 12.6 points and 6.8 rebounds last season.

"Serge Ibaka only has one year and $12.3 million left on his contract after a slightly down season," said FOX 35 Sports Anchor Adam Shadoff, "but he can protect the rim and stretch floor."

The Magic are coming off a 35-47 season in which they missed the playoffs for the fourth straight season and are looking to add talent and depth.

There is speculation the Thunder are tweaking the roster to appeal to soon-to-be free agent Kevin Durant.

Earlier in the night, the Philadelphia 76ers selected LSU freshman Ben Simmons with the No. 1 pick Thursday night as the NBA draft opened with three straight freshmen.

The 76ers grabbed the versatile 6-foot-10 forward from Australia who averaged 19.2 points, 11.8 rebounds and 4.8 assists to become the only player in SEC history to finish in the top five in all three categories.

He comes with some questions -- he made only one 3-pointer -- but too much potential for the 76ers to pass up with their first No. 1 pick since taking Allen Iverson 20 years ago.

"It feels amazing, honestly," Simmons said. "I can't even -- my legs were shaking when I was on stage."

76ers fans who made the trip to Brooklyn's Barclays Center loudly cheered the selection in hopes that Simmons can help them move forward after three straight dismal seasons, including a 10-72 finish in 2015-16 that was just a game better than the worst ever in the 82-game schedule.

The last No. 1 pick from LSU was Shaquille O'Neal -- who will be enshrined in the Naismith Memorial Basketball Hall of Fame along with Iverson in September.

The Los Angeles Lakers, picking second for the second consecutive year, took Duke's Brandon Ingram, who averaged 17.3 points as the ACC freshman of the year. He becomes the latest young player on a team that will begin life without the retired Kobe Bryant next season.

"I'm just going to be myself," Ingram said. "Whatever I can do to impact the game, whatever the coach needs me to do, I'm going to do it."

The Boston Celtics then began a busy night by picking California forward Jaylen Brown. Boston has eight picks in the two-round draft, starting with one it acquired from Brooklyn in 2013 in the deal that sent Kevin Garnett and Paul Pierce to the Nets.

Croatian Dragan Bender ended the run of freshmen when the Phoenix Suns selected the 7-1 forward who has been playing professionally for Maccabi Tel Aviv.

The Minnesota Timberwolves used the No. 5 pick on Providence junior Kris Dunn, a two-time Defensive Player of the Year in the Big East who should fit nicely for new coach Tom Thibodeau.

A couple of the draft's best shooters went next, with New Orleans grabbing All-American Buddy Hield from Oklahoma, and Denver picking Kentucky freshman Jamal Murray at No. 7.