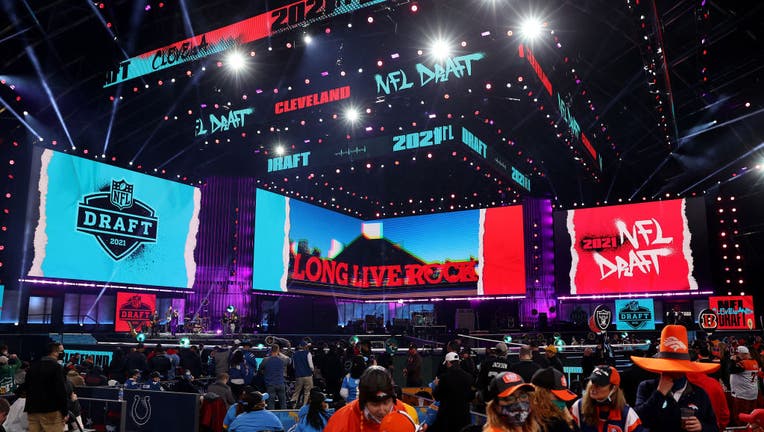 CLEVELAND, OHIO - APRIL 29: Fans wait for the start of the 2021 NFL Draft at the Great Lakes Science Center on April 29, 2021 in Cleveland, Ohio. (Photo by Gregory Shamus/Getty Images)

The Jacksonville Jaguars made the easiest and maybe most significant selection in franchise history when they chose Clemson quarterback Trevor Lawrence with the first pick in the NFL draft Thursday night.

The Jaguars made the announcement that’s been expected for months shortly after the start of the draft, setting off a raucous celebration inside TIAA Bank Field.

A sold-out draft party, which included a crowd of 8,000, cheered wildly as NFL Commissioner Roger Goodell stepped to the podium to call Lawrence’s name.

Kyle Pitts is considered by many the most dynamic player in this year’s draft. The Atlanta Falcons certainly thought so and have selected the Florida tight end with the fourth overall pick.

Pitts figures to be more of a hybrid tight end/wide receiver in the pros, with few blocking assignments. So what when Pitts is 6-foot-6, 245 pounds and presents an intimidating matchup for even the best defenders. Pitts has sure hands, speed, reach, elusiveness and intelligence. He should be an instant starter in Atlanta, maybe an instant star.

Miami has drafted Jaylen Waddle, the game-breaking receiver from Alabama, with the sixth overall pick.

The first player chosen from the national champions, Waddle is as versatile as any wideout in a draft very deep in pass catchers. He has blazing speed, and elusiveness and also can return kicks.

Waddle played in only six games last season because of a broken left ankle.