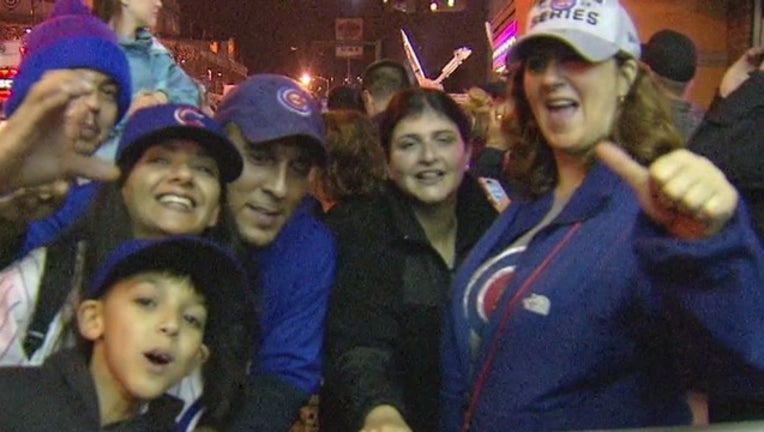 Long-suffering Chicago Cubs fans erupted into cheers at exactly 11:47 p.m. and swarmed into the streets on Wednesday as the Cubs won the World Series title that had eluded them for 108 years. And they showed no signs of stopping early Thursday.

Fans who packed bars to watch the games on television near Wrigley Field -- neither of which existed back in 1908 -- celebrated in the shadows of the statues of Cubs greats Ernie Banks, Billy Williams, Ron Santo and legendary announcer Harry Caray.

As the game ended, the roar from inside the bars and the throng of fans on the streets was deafening. The crowds inside and out sang Chicago singer-songwriter Steve Goodman's "Go Cubs Go," a standard chorus after Cubs wins, at the top of their lungs.

"This was torture," said Mike Delmanowski, a lifelong Cubs fan who flew to Chicago from California just to be surrounded by other Cubs fans. "I would not have missed it for anything."

"I am so proud to be a part of it," added his wife, Sue, who was crying off and on from the fifth inning.

As the celebration progressed, thousands of fans poured into the streets leading away from Wrigley, many of them singing, "We Are The Champions."

Fans hugged each other -- many of them crying -- and took pictures of each other and themselves. Many fans took turns writing their names and words of congratulations in chalk on Wrigley Field's brick walls. Some got on friends' shoulders to find spots high up on the walls that were not yet covered with names.

Thousands of people were still in the ballpark neighborhood, known as Wrigleyville, at least an hour after the game ended, as fireworks exploded every few minutes. Chicago police said Thursday morning that it didn't immediately have details of possible arrests.

"To finally see this in my lifetime with my son here with us, it means everything," said Craig Likhite, who drove to Chicago with his wife, April, and their 10-year-old son, Cade, because they wanted to see history made with other fans as close to Wrigley as possible.

"This game with all the ups and downs showed him exactly what it is to be a Cubs fan," the 50-year-old Likhite said. "My dad passed away this year. He would have loved this."

Judy Pareti flew in from New York City to watch the game at Murphy's Bleachers, a neighborhood sports bar in a building where her grandfather lived and operated a hot dog stand.

"My dad and grandfather owned it, and I was born here," she said. "I would never want to be anywhere but here for this."

The 8-7 extra-inning victory over the Cleveland Indians in Cleveland came after the emptiness and bitterness of years past when the Cubs found spectacular and sometimes downright strange ways to snatch defeat from the jaws of victory.

The setbacks prompted the annual refrain of "Wait until next year."

Comedian and long-time Cubs fan Bob Newhart, who grew up in the Chicago area, celebrated by alluding to the curse allegedly placed on the team during the 1945 World Series by the owner of the Billy Goat Tavern after he was told his pet goat wasn't welcome at Wrigley.

"The billy goat is dead!! As I've said, from the beginning, I'm getting too old for this!" the 87-year-old actor tweeted.

Every Cubs fan knows those stories of defeat, starting with the 1969 team loaded with Hall of Famers that amassed a 9 1/2-game lead in mid-August before they started losing game after game in such numbers that the Miracle Mets not only caught them but ended up winning the National League East by 8 games.

Then came 1984. After taking the first two games of the National League Divisional Series against the Padres at Wrigley, the Cubs needed just one win in San Diego to advance to the NLCS. They were swept in three games on the West Coast.

There were other playoff losses but none as painful as in 2003 when in a where-were-you-when-it-happened moment that Cubs fans still have trouble comprehending, Steve Bartman deflected a ball that seemed destined for Moises Alou's glove with the Cubs just five outs from reaching the World Series.

Fans watched in horror as the Cubs fell apart, and few who left the park that night believed the team would win Game 7 the next night. They didn't.

But that was all in the past as Cubs fans throughout Chicago and beyond celebrated into the morning hours Thursday.

"People always said if the Cubs win the World Series it would be like hell freezing over," said Liz Wolfe, a 36-year-old physical therapist. I'm still in shock. This is the most exciting thing in my life."