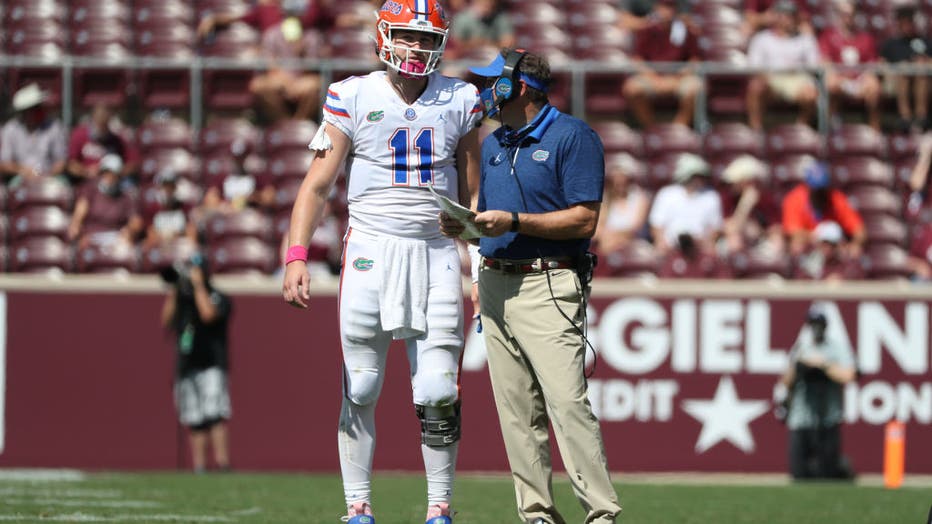 Kyle Trask #11 and head coach Dan Mullen of the Florida Gators meet on the field during the game against the Texas A&;M Aggies on October 10, 2020 at Kyle Field in College Station, Texas. (Photo by Tim Casey/Collegiate Images/Getty Images)

“We’re playing 10 SEC games in a row,” Florida coach Dan Mullen said. “We have to get over this one quick. It’s more like an NFL schedule.”

Mullen was disappointed that the Gators allowed A&M to convert 12 of 15 third-down opportunities. He also thought A&M’s crowd played a factor in the win, even though only 24,709 fans were allowed because of the coronavirus.

“The governor has passed a rule that we’re allowed to pack the Swamp and have 90,000 in the Swamp to give us the home-field advantage Texas A&M had,”

Now that Florida Gov. Ron DeSantis has lifted capacity restrictions at sporting events in the state, Mullen wants to see a much bigger crowd than he saw Saturday when the Gators are at home next week.

“I certainly hope our university administration follows the governor,” Mullen said. “The governor has passed a rule that we’re allowed to pack the Swamp and have 90,000 in the Swamp to give us the home-field advantage Texas A&M had.”

FOX 35 News is asking for your feedback on whether or not you agree with Coach Mullen.  Let us know through your social media. Use hashtags #FOX35FullHouse for crowded stadiums and #FOX35FewerPeople for limited capacity.

The Gators allowed 17,000 fans for their home opener on Oct. 3.  Florida hosts LSU next Saturday in the first of two straight home games.

Both teams showed off their offensive firepower, but will need to improve on defense after a game where the teams combined for more than 900 yards.

The Aggies should move up a few spots after knocking off the Gators, and Florida will certainly drop after losing to a team that didn’t really put up a fight against Alabama last week.