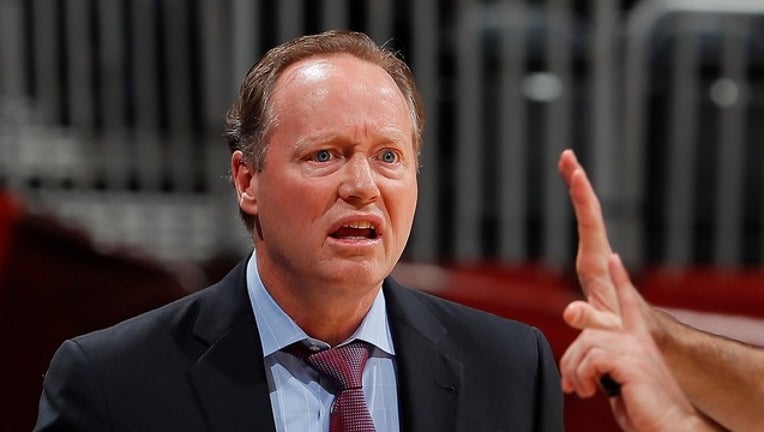 Mike Budenholzer of the Atlanta Hawks reacts after a foul during the game against the Portland Trail Blazers at Philips Arena on December 30, 2017 in Atlanta, Georgia. (Photo by Kevin C. Cox/Getty Images)

The Hawks and Budenholzer mutually agreed to part ways Wednesday in a move announced by the team in a three-sentence statement.

The decision was not totally unexpected as Budenholzer was granted permission to interview with other teams even though he is under contract with the Hawks for two more seasons.

According to multiple reports, Budenholzer interviewed with the Phoenix Suns for their vacant coaching position last week before withdrawing his name from consideration. Budenholzer now may be a top candidate to coach the New York Knicks.

Budenholzer was 213-192 in the regular season and 17-22 in the playoffs in five seasons with Atlanta. The Hawks were an Eastern Conference-worst 24-58 this season.

The Hawks' free-fall from a franchise-record 60 wins only three years ago to the bottom of the conference this season was startling. The team's streak of 10 straight playoff seasons ended, but Budenholzer still carried the respect needed to earn interest from other teams looking for a coach.

Even this season, when the Hawks tied with Dallas for the NBA's third-worst record, they were rarely blown out. They lost 21 games by fewer than 10 points, with only seven losses by 20 or more points.

Always passionate on the bench, at times to the point of earning rebukes from officials, Budenholzer showed no sign of giving up on the team.

"I love what I do," Budenholzer said on April 11, one day after the end of the disappointing regular season. "I love this team. I'm focused on what we just did and how we can get better going forward."

Golden State coach Steve Kerr, who played for the Spurs when Budenholzer was Gregg Popovich's longtime assistant, said last month he has borrowed from Budenholzer's strategy.

Budenholzer was named NBA coach of the year for the 2014-15 season, when he led the Hawks to their first 60-win season, a division title and their first appearance in the Eastern Conference finals.

He was promoted to president of basketball operations but then gave up that title when Travis Schlenk was hired as general manager in 2017. The loss of power may have been the first step in Budenholzer's exit.

The Hawks' inability to retain such top players as Al Horford and Paul Milsap led to the team's rapid decline. The Hawks fell to the bottom of the conference while leaning heavily on rookie center John Collins, second-year forward Taurean Prince and point guard Dennis Schroder.

The Hawks have scheduled a news conference with Schlenk for Thursday.

Schlenk declined an interview request from The Associated Press.