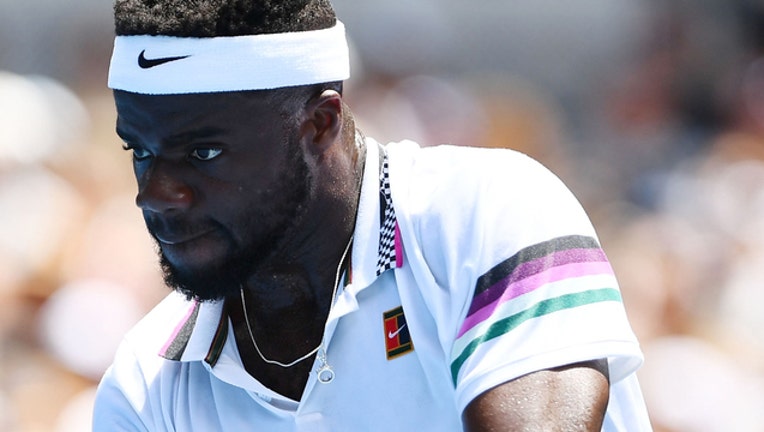 Frances Tiafoe of the US plays a backhand in his fourth round match against Grigor Dimitrov of Bulgaria during day seven of the 2019 Australian Open at Melbourne Park on January 20, 2019 in Melbourne, Australia. (Photo by Quinn Rooney/Getty Images)

MELBOURNE, Australia (AP) - Frances Tiafoe just kept shaking his head and calling the whole thing "crazy" and "unbelievable." Which it all kind of is.

That he did it with the hydrating help of pickle juice guzzled during changeovers to fend off cramps.

That his shirt-removing, biceps-slapping victory poses paying homage to LeBron James have gone viral and might have caught the NBA superstar's attention.

And, most poignantly of all, that Tiafoe is delivering on the promise he made as a kid to his mother and father — immigrants from Sierra Leone in West Africa — that one day he'd be a success.

The Washington Post reports Tiafoe grew up in College Park, Md., taking up the sport at the Junior Tennis Champions Center with his twin brother, Franklin.

"I told my parents 10 years ago I was going to be a pro. I was going to change their life. My life," Tiafoe said, fighting tears after getting past Dimitrov, a two-time major semifinalist who is coached by Andre Agassi. "And I'm in the quarters of a Slam now. ... I can't believe it."

Tiafoe proudly noted that he has been able to buy two homes for his folks.

Tiafoe's father, whom he calls "Pops," was a maintenance man at the tennis facility where he learned to play.

That background taught Tiafoe what he considers valuable lessons.

"Look, I'm not saying you can't make it if you grew up from a wealthy situation. I mean, a ton of people have. But obviously that gave me an incentive, a reason to give, a reason to work every day, understand why you do it," he said. "Obviously it's how bad do you really want to be successful, essentially. Like, what does that really mean to you? Why are you doing it?"

The 39th-ranked Tiafoe never had been past the third round at a major until now. And what a challenge awaits Tuesday: His quarterfinal match will be against 17-time major champion Rafael Nadal.

"He's going to run me like crazy," Tiafoe said. "I've got to go to sleep now, matter of fact."

And then, in either a bit of false bravado or a harmless joke, the American added: "Yeah, he better get ready."

The second-seeded Nadal had very little trouble moving on, beating Tomas Berdych 6-0, 6-1, 7-6 (4) in a rematch of the 2010 Wimbledon final. On the other half of the men's bracket, 2018 Australian Open runner-up Marin Cilic was ousted by 22nd-seeded Roberto Bautista Agut 6-7 (6), 6-3, 6-2, 4-6, 6-4. Bautista Agut had been 0-9 in fourth-round matches at majors, and his first quarterfinal will come against Tsitsipas, another man making his debut in that round.

In women's action, two past champions and former No. 1s were sent packing. Angelique Kerber, who won the title at Melbourne Park in 2016, was completely outplayed by unseeded Danielle Collins of the U.S. in a surprisingly lopsided 6-0, 6-2 upset, while 2008 champ Maria Sharapova double-faulted 10 times in a 4-6, 6-1, 6-4 loss to No. 15 Ash Bartyof Australia.

Barty, the first woman to reach the quarterfinals at her country's Slam since Jelena Dokic a decade ago, now meets two-time Wimbledon winner Petra Kvitova, a 6-2, 6-1 winner against 17-year-old Amanda Anisimova of the U.S.

Nadal, who improved to 20-4 against Berdych, never has faced Tiafoe.

"He has everything. He's quick. He serves well. Very quick forehand. He's a very dynamic player, aggressive one," Nadal said. "Of course he's dangerous: He's in the quarterfinals."

Tiafoe's first contest at that stage will be Nadal's 37th.

"It's so nice to see somebody new, somebody fresh," Dimitrov said. "I mean, everybody in the locker room likes him."

If Tiafoe can pull off what would be a real upset, perhaps he'll bring out yet another variation of James' "Silencer" celebration.

After getting past Dimitrov, Tiafoe removed his shirt, flexed his arms and smacked his muscle, pounded his chest, then dropped to his knees and patted the court with both palms.

As the crowd sang a chorus of "Happy Birthday" and a few rounds of "Oh, Fran-ces Tee-ahh-foe," he sat on a sideline bench, covering his face with a towel.

"I almost didn't do it today," he said about his post-match moves, "because I thought I was going to cramp."