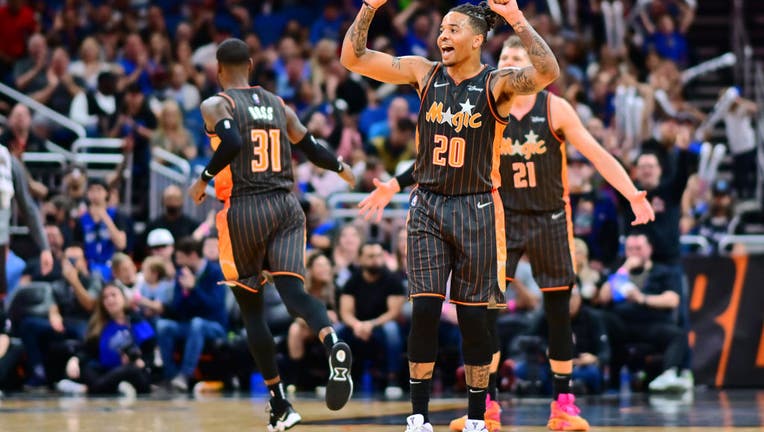 ORLANDO, FLORIDA - MARCH 11: Markelle Fultz #20 of the Orlando Magic reacts during the second half against the Minnesota Timberwolves at Amway Center on March 11, 2022 in Orlando, Florida. NOTE TO USER: User expressly acknowledges and agrees that, by

ORLANDO, Fla. (AP) - Mo Bamba scored 27 points, Markelle Fultz and Mo Wagner did most of Orlando’s scoring in a big second-half rally and the Magic beat Minnesota 118-110 on Friday night to end the Timberwolves’ winning streak at six games.

During a 23-4 run over a stretch of eight minutes, Fultz scored five points and Wagner had the final seven, leaving the Magic with a 107-95 lead after they had trailed by 18 in the first half.

Two dunks by Jaden McDaniels helped the Timberwolves cut the lead to one with 3:13 left, but Wagner scored again, and Bamba settled it with a 3-pointer and a dunk with 42 seconds left.

Anthony Edwards led the Timberwolves with 25 points. Karl Anthony Towns had 21 points and 13 rebounds, but was called for three fouls in the first quarter.

Wendell Carter Jr. had 20 points, and Wagner came off the bench with 18 points in just 13 minutes for the Magic. Fultz finished with 14 points and seven assists.

Two nights after a 132-102 rout of Oklahoma City in which Malik Beasley set a franchise record with 11 3-pointers, the Timberwolves connected on seven of their first nine attempts from behind the arc. But they made only 8 of 36 in the rest of the game.

They led by 18 points midway through the second quarter, but Cole Anthony and Wagner did most of the scoring on a 20-7 Orlando spurt to end the first half with Minnesota leading 65-60.

The Timberwolves opened the second half by making their first four 3-point shots and regained a 12-point lead. But the Magic answered with a 37-point quarter in which they made 14 of 21 shots, including two 3-pointers each by Carter and R.J. Hampton.

Timberwolves: G Jordan McLaughlin did not play due to right groin tightness. ... Jared Vanderbilt, who sat out Wednesday night because of a left quad contusion, was back in the starting lineup . . . . Patrick Beverley, who sat out Wednesday with a sore right ankle, started and was called for his third foul with 7:55 left in the first quarter. He left the game and did not return.

Magic: Anthony made a fee throw after a technical foul was called on Jaden McDaniel in the first quarter, but the point was subtracted when it was determined that a double technical had been called, one of them on Carter.

Timberwolves: At Miami on Saturday night.