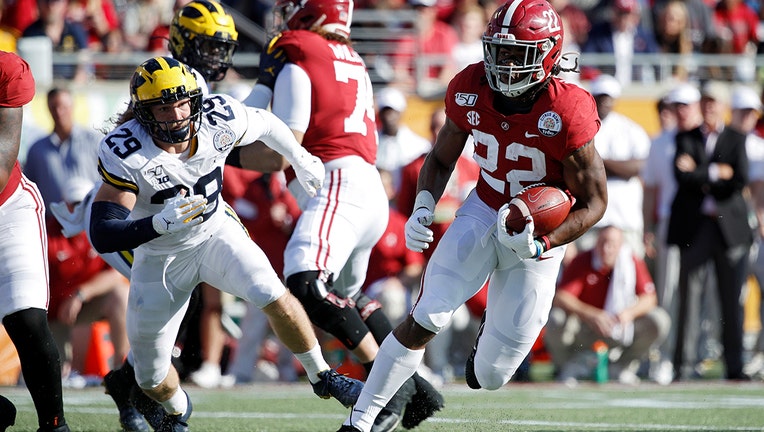 ORLANDO, FL - JANUARY 01: Najee Harris #22 of the Alabama Crimson Tide heads for the end zone on a nine-yard touchdown run against the Michigan Wolverines in the second quarter of the Vrbo Citrus Bowl at Camping World Stadium on January 1, 2020 in Or

Jones connected with Jeudy for an 85-yard score on Alabama's first snap, DeVonta Smith and Miller Forristall added touchdown grabs in the second half for the Crimson Tide (11-2), which trailed 16-14 at the break. Najee Harris ran for 136 yards and two touchdowns for Alabama.

Jeudy finished with six catches for 204 yards. His previous career-high for yards was 147 set last season against Missouri, and the Alabama bowl record had stood for more than a half-century -- Ray Perkins had 178 yards against Nebraska in the 1967 Sugar Bowl.

Jones -- who took over as Alabama's starter when Tua Tagovailoa was lost for the season with an injury in November -- completed 16 of 25 passes for 327 yards.

Shea Patterson completed 17 of 37 passes for 233 yards and a touchdown for Michigan (9-4), which dropped its fourth consecutive bowl game. Quinn Nordin kicked three field goals for the Wolverines, including a school-record-tying 57-yarder to end the first half and give Michigan the lead.

The Crimson Tide had two touchdown drives of 90 seconds or less -- Jeudy's score on Alabama's first play and a long go-ahead touchdown grab by Smith early in the third quarter. They were quick-strike all season long, with 22 TD drives taking 1:30 or less and 38 TDs coming in 2:00 or less.

And the last of those was the one that put this game away for Alabama with 10:01 left. Facing 3rd-and-11 from its own 8, Jones connected with Jeudy for 14 yards. On the next snap, Jones and Jeudy hooked up for 58 more yards. And the next snap was a 20-yard scoring pass to a wide-open Forristall.

Michigan: The Wolverines have dropped 16 straight road or neutral-site games against teams ranked No. 15 or higher in the AP poll, including all 10 under coach Jim Harbaugh. The last time the Wolverines won such a game was Jan. 3, 2012 over then-No. 11 Virginia Tech.

Alabama: It was the 12th bowl or playoff-game win for Alabama coach Nick Saban. That tied him with Paul "Bear" Bryant for the most in school history. And the Crimson Tide won their 27th consecutive game when allowing less than 40 points.

WR Henry Ruggs III -- a 2020 first-round draft possibility if he skips his senior season -- was injured with 9:30 left in the third quarter and limped off while being assisted by athletic trainers. The Crimson Tide had only two players skip the bowl game for draft preparation, cornerback Trevon Diggs and linebacker Terrell Lewis. Ruggs was part of a draft-possible group that decided to play, along with Jeudy and Harris.

Alabama should stay in the top 10 for the 76th consecutive edition of the AP Top 25, moving into a tie for the fifth-longest streak in poll history.

Along with the school-record-tying 57-yarder to end the half -- Hayden Epstein also connected from 57 yards out in the first quarter at Michigan State on Nov. 3, 2001 -- Nordin finished the day 3 for 3 on field-goal tries. It wrapped up a perfect season for kickers facing the Crimson Tide: They went 20 for 20 on field goals.

Miami Dolphins owner Stephen Ross and members of the team's front office were on the field pregame, watching warmups. Ross is a prominent Michigan alum -- there is a Stephen M. Ross Athletic Campus spanning 280,000 square feet in Ann Arbor. And the Dolphins are also one of the teams that seem likely to consider drafting Tagovailoa if he turns pro.

Michigan: Opens next season on Sept. 5 at Washington, the first meeting between those schools in 18 years. It begins a home-and-home, with the Huskies going to Ann Arbor on Sept. 11, 2021.

Alabama: Opens next season on Sept. 5 against USC in Arlington, Texas. It'll be the ninth consecutive season in which the Crimson Tide open with a neutral-site game; they're 8-0 so far in those.