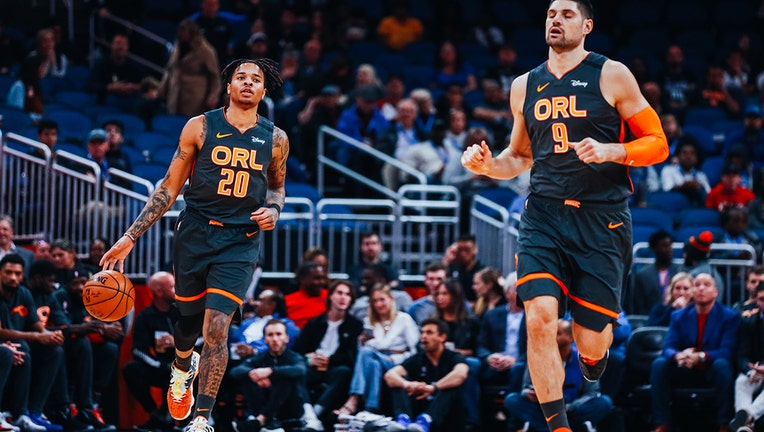 ORLANDO, FLORIDA - JANUARY 06: Markelle Fultz #20 and Nikola Vucevic #9 of the Orlando Magic run up court to begin the game against the Brooklyn Nets in the first quarter at Amway Center on January 06, 2020 in Orlando, Florida. NOTE TO USER: User exp

ORLANDO, Fla. (AP) - Markelle Fultz had the best game of his career and the Orlando Magic needed it to get past the slumping Brooklyn Nets.

Fultz scored a career-high 25 points, including seven straight during a 15-1 run in the fourth quarter that lifted the Magic over the Nets 101-89 on Monday night.

"I was just out there playing in the flow of the game, being aggressive," said Fultz, the top pick in the 2017 NBA draft by the Philadelphia 76ers. "I knew I had a shot or I could pass to my teammates. It just happened that I had open shots, so I took advantage of those."

Fultz was 11 for 20 from the field with four assists and two steals.

"I didn't like how much he got to the rim," Brooklyn coach Kenny Atkinson said. "The 3s we'll live with, but all the rim attempts ... that was too much. He did a great job of driving it. He hurt us in transition. He played a great game."

Nikola Vucevic had 24 rebounds and 11 points for his 300th career double-double, and the Magic pulled away in the final seven minutes after going 9:20 without a field goal.

Joe Harris and Spencer Dinwiddie scored 16 apiece for the Nets, who lost their sixth straight game after charging back from a 16-point deficit to take a lead in the fourth quarter. They shot 33% for the game.

Seven players scored in double figures for the Magic. D.J. Augustin came off the bench to contribute 16 points and five assists. Even though Harris scored 13 points on 5-of-6 shooting, the Nets fell behind by 16 while shooting 29.8% (14 for 47) in the first half.

Orlando led 52-39 at halftime, but Dinwiddie had 12 points in the third quarter and Dzanan Musa scored Brooklyn's last six points of the period to get the Nets back in it.  Wilson Chandler's short jumper with 8:57 left in the fourth pulled the Nets ahead, 78-76. Two free throws by Evan Fournier then launched a 15-1 surge for Orlando over the next 4 1/2 minutes. Fultz followed with a layup, another layup and a 3-pointer from the corner.

"That was Markelle being aggressive and taking advantage of the transition and having the lane open," Fournier said. "That's what he does every night, to be honest. It's just there was an open lane, he took it twice, and that shot in the corner was just the fruit of his work."

UP NEXT
Nets: Host the Oklahoma City Thunder on Tuesday night.
Magic: Host the Washington Wizards on Wednesday night.