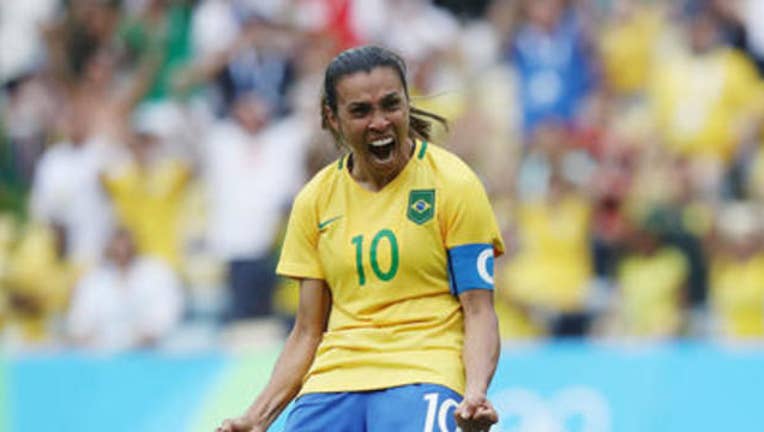 Associated Press -    France survived a tense extra-time knockout match against Brazil and advanced to the Women's World Cup quarterfinals when captain Amandine Henry redirected Amel Majri's free kick for a tiebreaking goal in the 107th minute of a 2-1 victory on Sunday night at Le Havre.

The World Cup hosts, in the quarterfinals for the third straight time, will play the defending champion United States or Spain at Paris on Friday.

Valerie Gauvin, whose first-half goal was disallowed in a video review, put fourth-ranked France ahead in the 52nd minute but Thaisa tied the score 11 minutes later for No. 10 Brazil.

With the prospect of a penalty kick shootout growing, Henry scored on a left-footed shot for her 13th goal in 86 international appearances, her second goal of the tournament.

Brazil had a chance to go ahead near the end of the first extra-time period when Debinha broke in alone and beat goalkeeper Sarah Bouhaddi, but her shot headed toward goal was blocked in front of the line by defender Griedge Mbock Bathy.

This marked perhaps the final World Cup game for 33-year-old Brazilian star Marta, who scored a record 17 goals in five tournaments. And it likely was the last game in the showcase for 41-year-old Formiga, who appeared in a record seven World Cups.

France appeared to go ahead in the 23rd minute when Kadidiatou Diani lifted a cross in front of the goal. Brazil goalkeeper Barbara got her hands on the ball and Gauvin crashed into her. The ball went off Gauvin's shoulder and into the net as both players fell to the ground. After they recovered, Canadian referee Marie-Soleil Beaudoin signaled for a video review, and the goal was disallowed because of a foul.

Gauvin did score a goal that counted early in the second half. Diani sped down a flank past Brazilian defender Tamires and crossed. Gauvin slid in ahead of Leticia Santos and poked the ball past Barbara for her 12th goal in 22 international appearances, her second of the tournament.

Bouhaddi prevented an equalizer minutes later, leaping to tip Cristiane's long-range shot off the crossbar and over.

Thaisa tied the score with her sixth goal in 82 appearances. The score at first was disallowed for an offside call on Debinha in the buildup but was reversed in a video review. Wendie Renard's attempted clearance of Debinha's cross went to Thaisa, who scored with a left-footed shot.

Tamires put the ball in the net in the 86th minute but was among three Brazilians who were clearly offside, and the goal was disallowed.

Cristiane needed to be helped off the field in the 95th minute because of a leg injury and was substituted.