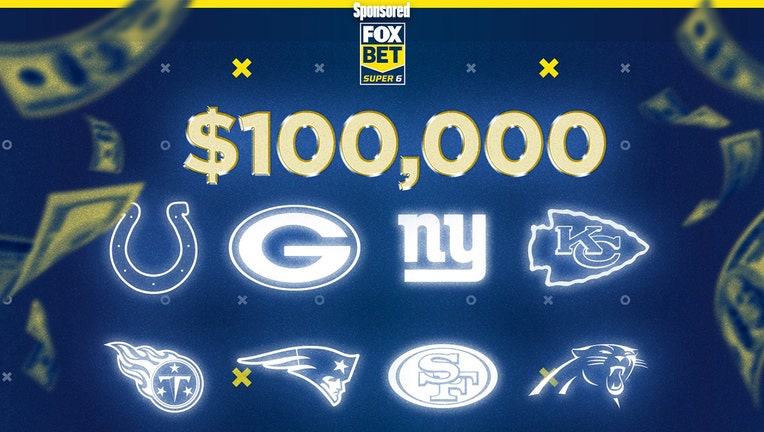 Week 7 of the 2021 NFL season is shaping up to be a wild one. There are multiple games with double-digit point spreads, and several more where the favorite is expected to win by more than a touchdown.

But as savvy investors, gamblers and sports fans know, chaos is just another word for opportunity. And if you're able to sort through all the noise and correctly predict the outcome of six of Sunday's Week 7 NFL games, you could win $100,000 of Terry Bradshaw's money absolutely for free with FOX Bet Super 6.

All you have to do is download the FOX Bet Super 6 app (if you haven't already!), enter Sunday's NFL Challenge and predict which team will win and by how many points in six of Sunday's games.

And if you're right, you could win this week's $100,000 jackpot and join the list of FOX Bet Super 6 winners who have claimed over $5 million in prizes in the short existence of the Super 6 app.

To help you get to the pay window, here are my thoughts on this week's FOX Bet Super 6 games.

The Packers have won five straight, and only two of them have been close, both on the road. When they take on inferior opponents at home, they have rolled.

Washington’s injury report, on the other hand, is the length of a CVS receipt. As a result, Taylor Heinicke has struggled the past two weeks, both at home, with just one TD pass and three interceptions. The last time he went on the road to face a top tier team, Washington trailed 21-0 and lost to the Bills by 22.

Washington has so many injuries, it probably can’t employ Chicago’s defensive strategy of three safeties to take away the big pass play while conceding the run. The Packers rushed for 154 yards against the Bears and could easily reach that number again as the offensive line gets healthier — star left tackle David Bakhtiari is practicing this week for the first time all season.

The one concern in picking the Packers to cover is the look-ahead effect. Next Thursday, they travel to undefeated Arizona in a game that will carry early-season top-seed implications. Is it possible Green Bay overlooks a bottom-dweller, trots out some reserves in the fourth quarter and doesn’t cover a big number? Aaron Rodgers is 22-2 straight up as a home double-digit favorite in the regular season, but just 13-11 ATS.

The line movement here is surprising, as the Falcons were 2.5-point underdogs on the look-ahead line but have flipped and are now 2.5-point favorites on the road.

Atlanta favored over anyone on the road is surprising. But Miami’s injuries are massive. Miami was down its top two receivers in Preston Williams and DeVante Parker last week against the Jags. Both starting cornerbacks also missed the Jacksonville game; Trevor Lawrence subsequently threw for 300 yards. The Dolphins have, according to Pro Football Focus, the worst offensive line in the NFL. Oh, and did I mention Miami played in London last week, and elected not to have a bye? In hindsight, that’s a horrible decision.

Atlanta, meanwhile, is coming off a bye week after beating the Jets in London two weeks ago. A dome team going outdoors in the Florida heat always gives me pause, but the early weather reports make it look like temperatures may not top the low 80s. In a battle of two bad teams that rank in the bottom 12 in the NFL in nearly every offensive and defensive category, my inclination is to take the points.

PICK: Dolphins to win by 3-4 points

How are the Carolina Panthers favored on the road … against anyone? Losers of three straight, the Panthers won’t have star running back Christian McCaffrey, and QB Sam Darnold has struggled without him, throwing six interceptions in three games and seeing his YPA and QB rating all below what he had done during the 3-0 start.

Carolina’s defense was gashed once again without star LB Shaq Thompson, and if he’s unable to go, maybe the Giants beat-up offense can actually move the ball. Daniel Jones fumbled on the first play of the game last week, then threw three interceptions and was sacked four times in the loss to the Rams. Without Saquon Barkley and Kenny Golladay, the offense is punchless.

The under has taken on big money as the total has gone from 45 to 43, signaling another low-scoring game between below-average QBs. The Giants haven’t covered the spread at home this season, and you have to wonder if the team has quit on Joe Judge, after they gave up 38 straight points to the Rams.

The Titans are coming off a Super Bowl-like win over the Bills on Monday Night Football, a game in which they were outplayed but survived in the final seconds.

The Titans defense was fortunate — Buffalo got into the red zone five times and only came away with 20 points. Here's the kicker: The Bills rank 26th in TDs on red zone possessions; the Chiefs are sixth. While the public claims the sky is falling for Kansas City, they still eviscerate bad defenses, and the Titans have a terrible defense. Tennessee’s secondary has been decimated by injuries, as their No. 2 CB is on the IR and their first-round pick might have torn his ACL vs Buffalo. KC’s defense just stinks, despite not letting injury-ravaged Washington get to the end zone once last week.

There will be offense, and lots of it. Two years ago, the Chiefs went to Tennessee and lost a thriller, 35-32, in a game the Chiefs led by 10 in the second quarter, and nine in the fourth. Derrick Henry rushed for 188 yards in that one, and he’s currently on an absurd streak — five straight games over 113 yards on the ground, leading the NFL in rushing attempts, yards, TDs, yards per game, and hasn’t fumbled this season.

The Jets head to New England, where they haven’t won since the 2011 playoff win. In fact, only three of the past 11 meetings — all Patriots wins — between these two teams have been even one-score games.

New York is off a bye, following a loss to Atlanta in London, while the Patriots have been on a three-week roller coaster, almost beating Tom Brady in a draining game, then rallying late to beat the hopeless Texans on the road, and coming home to nearly beat Dallas, only to fall in overtime. Yes, QB Mac Jones is among the leaders for ROY, but he has thrown interceptions in four straight games, and he’ll face a defense that could be getting healthier, with starters Marcus Maye (safety) and Jarrad Davis (LB) likely to return this week.

Maye was everywhere in the week two meeting in New York, with a sack and two tackles for loss. But the Jets never had a chance in that one, as rookie QB Zach Wilson struggled in his second career start, throwing four interceptions, including on his first two drives.

PICK: Patriots to win by 3-4 points

There’s some mystery around the 49ers off the bye week — will Jimmy Garoppolo start? — while the Colts are back in everyone’s good graces after crushing the Texans. Nothing like looking good for three quarters in an island game against the Ravens to get everyone on your side, followed by a win over the worst team in the NFL (yes, worse than the Lions)!

Sure, the Colts have been getting healthier (Ty Hilton, in the trenches, in the secondary), but you have to wonder when Carson Wentz turns into a pumpkin. He hasn’t had an interception in four straight games, which is tied for the longest stretch of his career. If the 49ers can’t get pressure (24th in pressure rate) on Wentz, the beleaguered secondary could be in for a long day.

The Colts run defense is currently No. 1 in DVOA, and completely bottled up the Ravens two weeks ago. But Lamar Jackson torched them for 442 yards and 4 TDs through the air. Can a hobbled Garoppolo do the same? He should have success throwing to Deebo Samuel, but with George Kittle on IR, it’s imperative they get something from Brandon Aiyuk (8 catches in 5 games).

San Francisco feels desperate, playing in the toughest division in the NFL, and potentially falling 4.5 games behind Arizona, who are hosting Houston.

Play FOX Bet Super 6 every week for your chance to win thousands of dollars, including a $10,000 prize on the Big Noon Kickoff game of the week, the $25,000 college football promotion and, of course, the weekly NFL Challenge. Just download the FOX Bet Super 6 app and make your picks today!