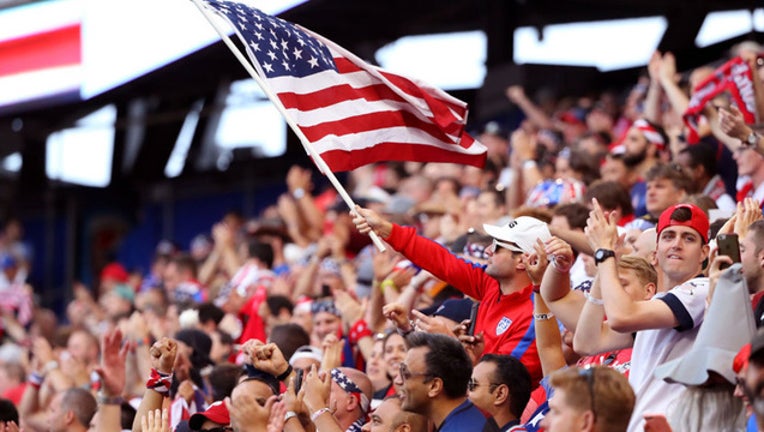 A fan waves an American flag before the game between the United States and Costa Rica during the FIFA 2018 World Cup Qualifier at Red Bull Arena on September 1, 2017 in Harrison, New Jersey. (Photo by Mike Lawrie/Getty Images)

The 2018 FIFA World Cup is in Russia this year and the Americans won’t be there after they failed to qualify for the tournament.

While soccer has a growing fan base in the states, it still seems a majority of Americans only care about soccer once every four years. Typically, it’s because they have a chance to express their patriotism and root for the national team on soccer’s biggest stage. But they will not have the chance to do that this year.

Still, the tournament will go on and we know the soccer fans will tune in. For the casual fan looking for a sport to watch besides baseball, here’s some reasons why you should still care about the 2018 FIFA World Cup.

Because Iceland is in it

If there’s one thing Americans love, it’s a good underdog story. From Rudy to Rocky, underdogs have dominated American popular culture, but they rarely have dominated the World Cup. Soccer is game that’s dominated by the traditional powerhouses. It’s one where the rich stay rich, and the poor stay poor. Iceland is hoping to change that.

The country has less than 350,000 people, yet it caught the attention of soccer fans after an improbable run to the semifinals of the Euro Cup in 2016. After qualifying for the World Cup, Iceland is now the smallest country to take part in the event.

The team is a longshot, no doubt about it. Its first game is against Argentina, one of soccer’s goliaths.  On paper, the team doesn’t stand a chance. But it’s sports. Anything can happen.

Because the world’s best players are playing together

Think of the World Cup as one giant all-star showcase. The world’s best players will take center stage. They’ll be on the pitch competing with players that they wouldn’t normally play against. And it’ll all be easily accessible, with most games airing on FOX.

Because it gives you an excuse to day drink

If you’re one of those people who likes to kick back with a beer (or three) and watch sports, then the World Cup might be right up your alley. In the group stage of the tournament, there will be about three games per day, with some starting early in the morning each day. This will go on for nearly a month.

So if you’re just looking for an excuse to drink, look no further than the other football. The World Cup could be that excuse. So kick your feet up, grab a cold one, turn on the tube and pretend you like soccer. After a few beers, it’ll be like you’ve been watching it all your life.

Because countries live and die by their teams

Most of the nations in the tournament take great pride in their national soccer teams. In places like Brazil and Argentina, the players are the rock stars, and the national team is a unifying force that bonds the nation and transcends social class and race.

Weird to think about, I know.

But you get these awesome moments out of it. Take the 2014 tournament as an example. Brazil was the host team, and had advanced to the semifinals. Everything was going according to plan. The team could advance to the final, could have a chance to win the whole darn thing on its home turf, if it could just beat the Germans. That’s where things went very, very wrong. The Germans won 7-1. It was like a train-wreck that viewers couldn’t turn away from.

The team turned from a point of pride to an embarrassment almost overnight. Talk about schadenfreude.