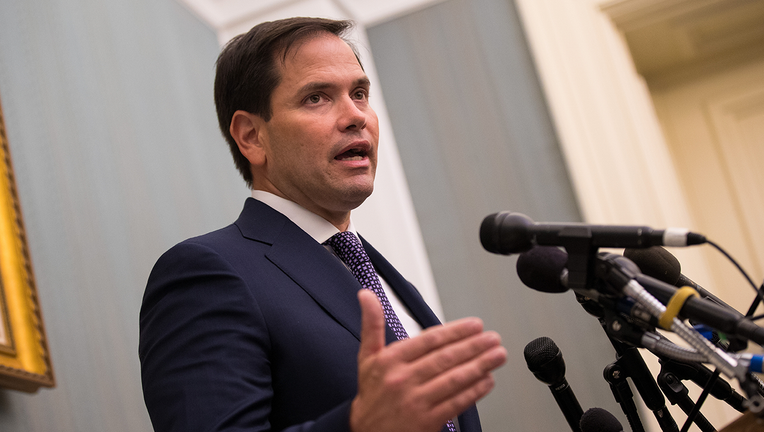 TALLAHASSEE, Fla. - Florida Sen. Marco Rubio introduced a bill Thursday that would protect the NCAA from being challenged in court if the association changes its rules to allow athletes to earn money for endorsement deals and personal appearances.

Earlier this week, the NCAA was hit with a federal antitrust lawsuit seeking damages for current and former athletes that could cost the association millions. The lawsuit also seeks to prevent the NCAA from regulating the ways athletes can be compensated for use of their names, images and likenesses.

Rubio’s Fairness in Collegiate Athletics Act also comes six days after Florida Gov. Ron DeSantis signed into a law a bill that would open up that market for college athletes in the state. That law goes into effect July 2021. California and Colorado have passed similar laws that go into effect in 2023. The NCAA is seeking help from Congress as more states push forward with their own NIL bills.

“We can’t have 50 separate laws. It will destroy college athletics,” Rubio, a Republican, said in a video posted to Twitter.

The bill gives the NCAA until June 2021 to have new rules in place that will supersede states laws. The NCAA is already working on those reforms, with a target date on January to have legislation its member schools can vote on.

“We look forward to collaborating with our elected officials to affect the necessary change,” Big 12 Commissioner Bob Bowlsby said in a statement. “Further, we are committed to working with policymakers to craft a system that permits student-athletes to profit from their name, image and likeness while also maintaining our uniquely American, education-based collegiate athletics model.”

Ramogi Huma, executive director of the National College Players Association, an advocacy group, said Rubio’s bill would be a step back for athletes, giving to much power to NCAA to craft a federal law.

“Senator Rubio’s bill undermines the rights and protections guaranteed to Florida athletes that the Florida state legislature and governor adopted as law just days ago.. It undermines economic freedom, states’ rights, and gives the NCAA immunity for illegal activities. We encourage him to change course on this issue,” Huma said.

In Rubio’s bill, the Federal Trade Commission would have the authority to enforce the law and if the NCAA does not meet the deadline to have new rules in place the FTC could impose penalties such as large fines against the association.

“It protects the athletes. It allows them to be compensated. These kids deserve to make a little bit of money while they’re in college,” Rubio said. “At the same time it prevents the implosion of college athletics.”

Rep. Mark Walker (R-N.C.) introduced a bill last year that would amend the tax code to prevent schools from allowing college athletes to profit from their names, images and likenesses. That bill has stalled.

Rubio is part of a bipartisan working group led by Sens. Chris Murphy (D-Conn.) and Mitt Romney (R-Utah) examining names, image and likeness compensation for college athletes, though Rubio’s bill was separate from that group.

Murphy said he is glad Rubio introduced legislation, but cautioned against putting too much emphasis on the interest of the NCAA.

“My belief is that any legislation we pass should put college athletes first, not the financial interests of schools,” Murphy said. “So we need to be really careful to not simply put the fate of athlete endorsement deals in the hands of the NCAA and its rulemakers, who haven’t shown much historical interest in putting the interests of kids ahead of the interests of athletic programs.”