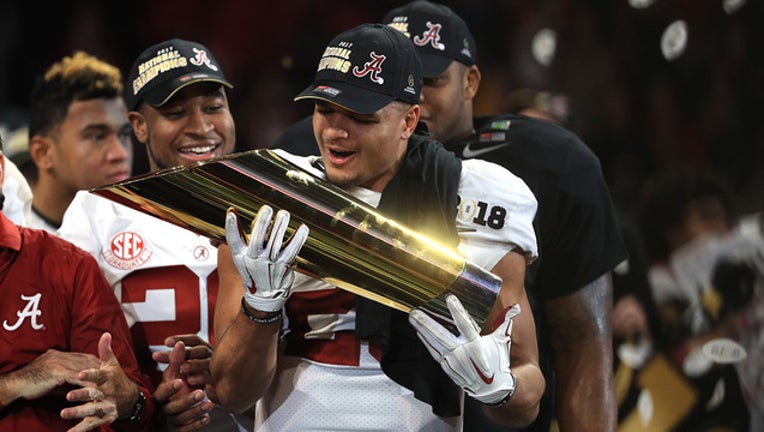 Minkah Fitzpatrick #29 of the Alabama Crimson Tide holds the trophy while celebrating with his team after defeating the Georgia Bulldogs to win the CFP National Championship, January 8, 2018. (Photo by Mike Ehrmann/Getty Images)

DAVIE, Fla. (AP) - The Miami Dolphins watched an early run on quarterbacks in the NFL draft and then opted for defensive help with the 11th overall pick Thursday, selecting versatile All-America safety Minkah Fitzpatrick of Alabama.

Fitzpatrick had a school-record four interception returns for touchdowns at Alabama and gives the Dolphins a playmaker in the secondary. He'll be paired with Pro Bowl safety Reshad Jones.

There had been speculation Miami might devote its first-round pick to a quarterback for only the second time since 1984, but four QBs were taken in the top 10 picks. The Dolphins will instead wait until a later round to draft a potential eventual successor to Ryan Tannehill - if they do so at all - and Luke Falk of Washington State might be the choice.

They'll also try to address needs at linebacker, tight end and defensive tackle in coming rounds. Their picks in the second and third rounds Friday are Nos. 42 and 73 overall.

Fitzpatrick, a starter since his freshman season at Alabama, ranked among coach Nick Saban's favorite players. He was widely projected as a top 10 pick, and is expected to be deployed on occasion as a linebacker, as a blitzer or against big receivers.