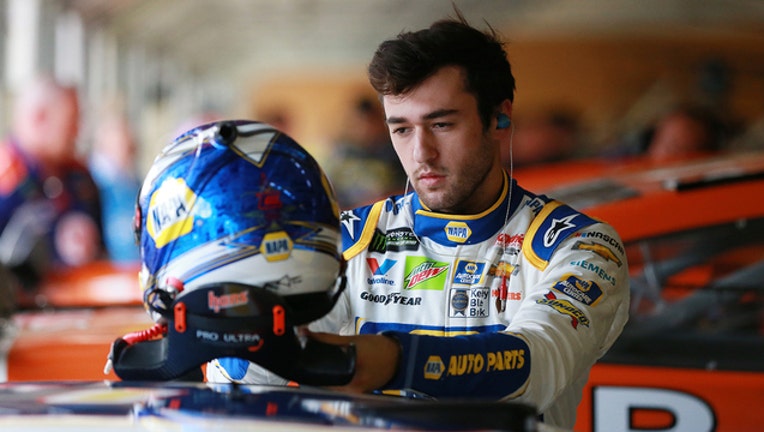 WATKINS GLEN, N.Y. (AP) - Chase Elliott put an emphatic end to his summer-long struggle, making a statement with a dominating win on the road course at Watkins Glen International.

A year after racing to his first career NASCAR Cup victory at The Glen, Elliott won a second time in the No. 9 for Hendrick Motorsports on Sunday, besting Martin Truex Jr. just as he did a year ago. Elliott, who started from the pole, led 80 of 90 laps around the speedy 2.45-mile layout to become the first repeat winner in nearly a decade, since Marcos Ambrose in 2011-12.

"I think it's huge," Elliott said. "We've had fast cars at times, but one thing or another ended up for a bad weekend. The way we did it was the biggest thing. That's the kind of effort you have to put on often to compete with the guys in the field."

Elliott had already qualified for the postseason with his win at Talladega in May, but after four straight top-fives he hadn't had a top-10 finish in the No. 9 Chevrolet since June at Pocono, a span of seven races. He also led 400 laps in the opening 13 races but had led only nine laps since until Sunday.

It was a two-car race for more than half the 220.5- mile distance and the entire final 40 laps.

Truex began to exert some pressure after sitting behind Elliott for more than 10 laps in the final segment. Elliott held his ground until Truex's No 19 Joe Gibbs Racing Toyota closed with six laps to go, waiting to pounce on a mistake that never came.

"I tried to do all I could. Chase did an excellent job just not making mistakes. He hit his marks. His car was really fast in the key areas that you need to be. I just couldn't get a run on him.

"Really, it was all about restarts and track position," Truex said. "If I could have just got by him on that last one we could have set sail."

Denny Hamlin was third, Erik Jones fourth for Gibbs and Ryan Blaney fifth in his No. 22 Penske Racing Ford after starting from the rear of the field.

Seven-time champion Jimmy Johnson finished 19th as he struggles to make the playoffs.

Truex was chasing a sweep of the two traditional road races on the schedule. He won at Sonoma in June for the second straight time and has five straight top-two finishes on road courses.

Elliott won the first two stages, dominating the first, and Truex moved into contention about a third of the way through the race.

Truex began to challenge Elliott for the lead entering the first turn on Lap 55, moving briefly inside on the 90-degree, downhill right-hander but backed off to wait for another shot. They were alone at the front of the field, 12 seconds ahead when Elliott dived to pit road on Lap 60 for his final stop. Truex followed suit the next time around and was back behind Elliott, a bit farther back this time.

Truex stayed back but like last year began to close the gap with 20 laps left. Elliott, who overcame some mistakes in the closing laps a year ago that nearly opened the door for Truex, maintained a steady lead of just a few car-lengths ahead for almost the entire stage, the two 5 seconds ahead of Hamlin in third.

The race was stopped when Johnson, desperate for a good finish, spun out coming out of the carousel turn, a sweeping right-hander, and seconds later Bubba Wallace spun Kyle Busch, who was running 10th on Lap 62. Busch and Wallace had banged each other while racing down the front straightaway before Wallace had the last tap, sending Busch's No. 18 Joe Gibbs Racing Toyota around entering the first turn. Busch, who started third, finished 11th.

Elliott and Truex were back in front for the restart on Lap 66, but Truex challenged right off the green flag, the two exchanging bumps speeding up through the esses as Elliott never relinquished the lead despite damage to the left rear of his Chevy.

"I think the left rear damage was the biggest concern," Elliott's crew chief Alan Gustafson said. "It was pretty significant. There's nothing you can do. There's no reason to panic. We'd done the best job we could. I knew it was up to Chase. Chase was going to have to run a perfect race and he did."