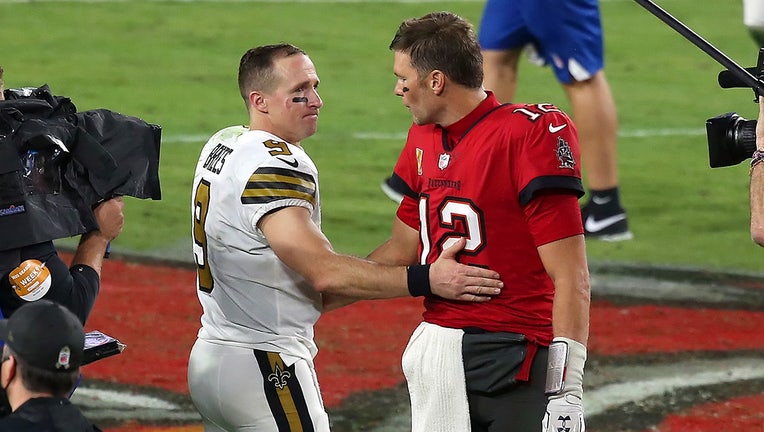 Drew Brees of the Saints and Tom Brady of the Buccaneers share a few words of encouragement after the regular season game between the New Orleans Saints and the Tampa Bay Buccaneers on November 08, 2020 at Raymond James Stadium in Tampa, Florida. (Ph

TAMPA, Fla. - There's no secret voodoo with New Orleans. The Saints are not in the Buccaneers’ heads. It just comes down to one simple fact.

"I just think they're just a good team," said Mike Evans. "When they play us, they do enough to beat us. So I don't think it's no psychological thing. They're just a really good team and they have been since I've been in the league."

The Saints have shown the Bucs just how good they are. Bruce Arians is 0-4 vs New Orleans since taking over the Bucs and this year the Saints stomped Tampa Bay twice by a combined margin of 46 points. The Bucs admit the execution needs to be better, but does there also need to be a change in strategy?

"I don’t know if it’s strategy – just have to do what you’re doing at this point in the season [well]," said Arians.  "We’re doing different things than we were doing back then, especially in the opener. Just a matter of [doing] what you do and do it better than how they do it."

"I know I just got to be more physical," continued Evans. "So things like that I look at. Other than that, I'm not going to give away our scheme and anything like that. I just try to find things I can do better."

As dominant as the Saints have been against the Bucs, beating a team three times in the same year is far from a lock. In fact, seven teams have avoided a clean sweep when they met up again in the playoffs.

"I believe we can, but we’ve got to do it on Sunday night," said Arians.  "It doesn't do us any good to talk about it now. Nothing happens on Wednesday."

"On any given Sunday, any team can win," said Chris Godwin.  "So if we focus on ourselves, go out there and handle our business, I like us. I like where we stand, and I like our guys. I’m sure they’re going to come out there, be fired up and be ready to go, but it’s our job to come out, be competitive and put our best foot forward."

The Bucs have been giving up an average of 22 points per game since the last time they faced the Saints. If they can keep New Orleans under that number, they can walk out of the Superdome with a win.