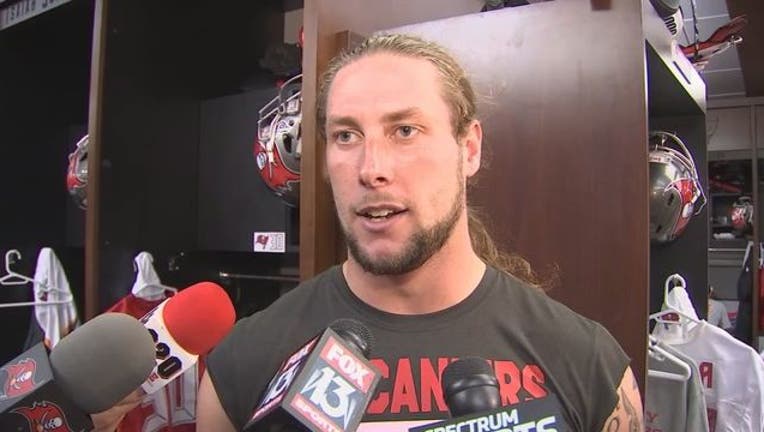 TAMPA (FOX 13) - The message is worn proudly on the back of Buccaneer players: "Earn it." It's also what's on the players’ minds. For free agent linebacker Riley Bullough, he's done a great job getting noticed, but has he done enough?

"It's had its ups and downs, which is expected,” said Bullough. "Obviously I want to go out on a high note. So do all the other guys. So it will be a fun game. It will be a great atmosphere. I'm looking forward to it."

Bullough grabbed the Hard Knocks spotlight during the first week of training camp -- a vocal rookie that has backed up talk with action. His eight tackles is tied for the fifth-most on the team. Players respect him even if the nickname they gave him -- "Joe Dirt” -- doesn't sound like they do.

"The one things that's happened to me is that more people notice me if I'm out in public, getting a sandwich or something,” said Bullough. "I get more people saying 'good luck' and all that. So it's been great so far."

Adam Humprhries knows exactly what Bullough is going through. He was in a similar position two years ago.

"For a guy like him just walking around the locker room, you can tell he's focused 24-seven,” said Humphries. "He's sitting in front in the team meetings. Just taking notes. He really wants it."

What’s encouraging for a player like Bullough is that the Bucs have shown they're not afraid to keep young free agents.

"Yeah, exactly,” said Bullough. "Just trying to go out every day and do my best. Put my best foot forward and make it hard for them to try and get rid of me."

Thursday night at 7:30, Bullough will make his last case to stay against the Washington Redskins at Raymond James Stadium.