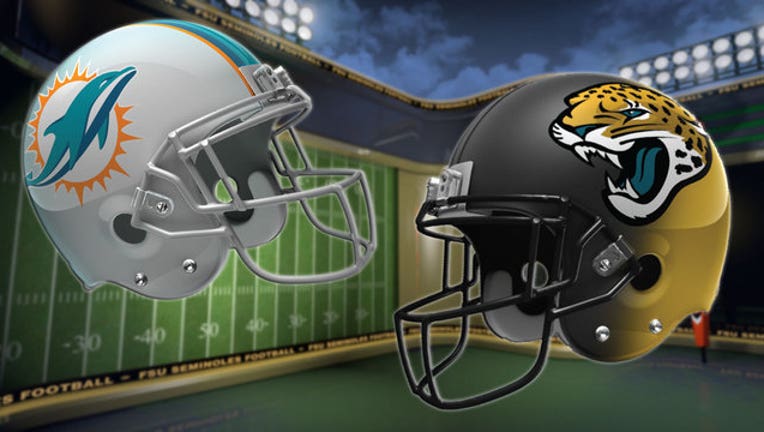 By STEVEN WINE
AP Sports Writer
MIAMI GARDENS, Fla. (AP) -- Blake Bortles came off the bench late in the third quarter with the score tied and provided a spark Sunday, helping the Jacksonville Jaguars eliminate the Miami Dolphins from the AFC playoff race by winning 17-7.

Bortles took the Jaguars 51 yards for a short field goal and 10-7 lead early in the fourth quarter. On the next series, Telvin Smith Sr. intercepted Ryan Tannehill and scored on a 33-yard return.

Kessler bruised his throwing shoulder when hit as he threw a pass and left the game late in the first half. He returned to start the third quarter, but after being sacked for a fifth time was replaced again late in the period by Bortles.

Bortles finished 5 of 6 for 39 yards. The third overall pick in the 2014 draft, he lost the starting job to Kessler in Week 13.

Tannehill had a first down at his 32 when he pumped and threw off his back foot. Smith stepped in front of the intended receiver and scored untouched.

Tannehill went 15 of 22 for 146 yards with one touchdown. The crowd was small but mustered noisy boos for the home team's offense and play-calling, and a final round of jeers as the game ended.

There was no miracle reminiscent of the Dolphins' previous home game, when they beat New England with a double lateral on the final play. An attempted double pass in the closing minutes went haywire and resulted in a holding penalty.

The two offenses surprisingly traded touchdowns on their opening drives, which covered 78 and 75 yards, but then resumed their season-long sputtering ways.

Miami and Jacksonville took turns showing why their records aren't better. Kessler lost a fumble cocking his arm to throw, but the Dolphins failed to capitalize on the gift, missing a field goal.

The Dolphins allowed a long punt return to give the Jaguars a chance at a 56-yard field goal on the final play of the first half, but Kai Forbath's kick fell short of the 20-yard line.

Calais Campbell forced and recovered a fumble to give the Jaguars a scoring chance at the Miami 17, but three plays later they were at their own 47 and punted.

Jaguars: T Josh Wells left the game in the second quarter with a concussion.

The Dolphins close the season Sunday when they try for a series sweep at Buffalo. Miami beat the Bills in Week 13.

The Jaguars conclude their season Sunday at the Texans, who won when the teams met in Week 7.