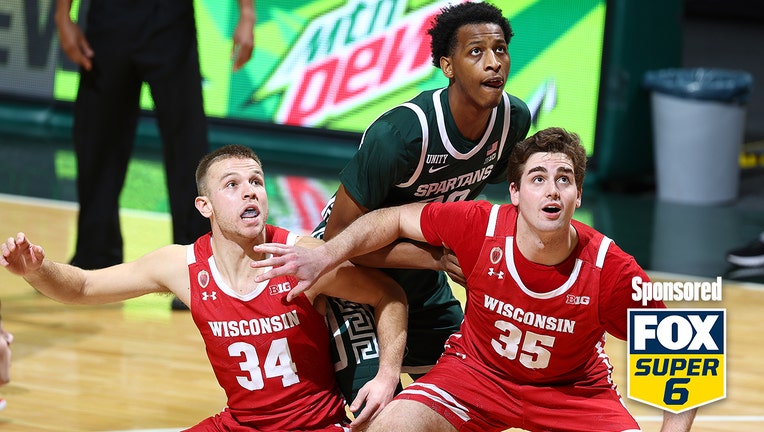 Brad Davison and Nate Reuvers of the Wisconsin Badgers box out Marcus Bingham Jr. of the Michigan State Spartans during a game on December 25, 2020. (Photo by Rey Del Rio/Getty Images)

The shrimp cocktails at St. Elmo’s Steakhouse. The interconnected walkways that can protect people from the fickle March winds. The burning passion for basketball. All of which have made Indianapolis the place the NCAA Tournament calls its home.

For teams in the 2021 Big Ten tournament, Indianapolis isn’t just a temporary stop on the Road to The Final Four. It is the destination that they hope to get used to for the next month.

When the tournament is over on Sunday, the teams who are playing in it will likely stay in place and hope to be in the NCAA’s makeshift bubble until early April thanks to the tournament being held in ‘Nap Town’ and throughout the state of Indiana. (Teams will likely be staying because they will immediately enter testing protocols.)

So Thursday’s games at the Big Ten Tournament aren't win or go home; they're "win and keep playing, or lose and stick around to see how long you stay in Indianapolis."

As second-round play gets underway with a quadruple-header on BTN, starting at noon ET with Maryland and Michigan State, you can get into the action by playing FOX Super 6 for your chance to win $1,000 every round until the championship, when the prize grows even larger.

All you have to do is download the FOX Super 6 app and answer six questions about each day of the conference tournament – all absolutely for free.

And to help you get ready to make your picks, here are our six things to look for on Thursday at the Big Ten.

That would be the Spartans opponent on Thursday afternoon – Maryland. The Terrapins ended the regular season with back-to-back losses at Northwestern and at home to Penn State – two teams considered in the rearview mirror of the conference. Penn State swept Maryland for the regular season- something that will likely go as a major negative on the resume being considered by the selection committee.

A win over Michigan State- who likely secured a spot by beating Michigan on Sunday — likely gets the Terps in. But Eric Ayala, Aaron Wiggins and company have some serious work to do.

2) Can Ohio State right the ship before the tournament?

It wasn’t long ago that the Buckeyes were in the conversation for a No. 1 seed next week. And it is a testament to the depth of the conference that they enter Thursday’s game against Minnesota as the No. 9 team in the country and No. 5 in the Big Ten.

However, Ohio State also has a four-game losing streak. The schedule has been brutal — Michigan, at Michigan State, Iowa and Illinois. But a fifth loss in a row, this one to the Golden Gophers, would change that perception and likely lead to serious questions heading into the tournament.

The consensus has been that Richard Pitino might not last at Minnesota thanks to the Golden Gophers' seven-game losing streak at the end of the season. If Pitino’s crew could upset Ohio State however on Thursday and get a little deeper run going, perhaps that’s good enough to keep Pitino in place.

There were a lot of sad stories that went along with the cancellation of the 2020 tournament. The fact that Rutgers' 29-year drought in the NCAA Tournament dating back to 1991 didn’t end was one of those stories. The Scarlet Knights however managed to bounce back and appear on the right side of the bubble this year. A win over Indiana — who is likely going to miss the tournament unless it makes a big run this week — would put a lock on their berth.

It wouldn’t be surprising if Rutgers sticks around in this tournament, either. The leading scorer for the Knights is Ron Harper Jr.  And for those of us who remember his dad playing for the Lakers, we just got a little bit older.

Wisconsin is going to make the tournament. But like Ohio State, it does have something to prove this week — namely, that it could do something in the big tournament. The Badgers have lost eight straight games against ranked opponents coming down the stretch and its only wins since February 10 have been at Nebraska and at Northwestern. They will play Penn State in the Lucas Oil Stadium nightcap on Thursday.

A win would set D’Mitrik Trice and company with a third game against Iowa on Friday night. A loss to the Lions- who they fell to back on January 30 — would make things ugly even if they aren’t on the bubble.

If the slate comes out with Michigan State-Michigan, Ohio State-Purdue and Wisconsin-Iowa on Friday with a Rutgers-Illinois game thrown in there, call the boss and take the day off.

Play the FOX Super 6 Challenge for college basketball throughout the conference tournaments and March Madness for your chance to win thousands of dollars, absolutely for free. Just download the FOX Super 6 app now and make your picks!