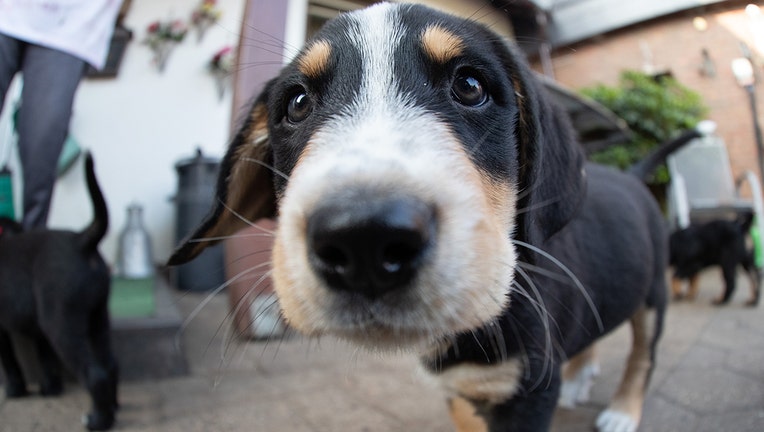 FILE: A puppy dog looks into the camera on July 12, 2019. Labrador Peggy and Bernese Mountain Dog Bronko had 13 offspring about eight weeks ago. (Photo by Friso Gentsch/dpa/picture alliance via Getty Images)

PORTUGAL - Even treats aren’t as much fun for traumatized pups.

A heartbreaking new study finds that screaming at dogs scares them for the long-term — and patience is a far superior method for training them, Science Alert reports.

Researchers — led by biologist Ana Catarina Vieira de Castro of the Universidade do Porto in Portugal — recruited 42 dogs from schools that used reward-based training, and 50 dogs from aversion training schools.

During the study period, pups taught with yelling and leash-jerking were found to be more stressed, with higher levels of cortisol found in their saliva.

Pups that experienced calm, gentle teachers, however, performed better at tasks researchers assigned to them, such as locating a bowl with sausage in it — in a roomful of empty-but-sausage-smeared bowls.

More harshly trained canines were slower to locate the treat bowl, which authors interpreted to show that their experiences had made them more depressed, less hopeful hounds.

The biologists also analyzed dogs during training to look for “stress behaviors” such as lip-licking, paw-raising, yawning and yelping.

“Critically, our study points to the fact that the welfare of companion dogs trained with aversive-based methods appears to be at risk,” the researchers conclude.