RALEIGH, NC (WOFL FOX 35) - The woman accused of taping a dog's muzzle shut and posting the photograph to Facebook appeared before a North Carolina Magistrate Monday morning.  FOX 35's David Williams traveled nearly 600 miles to get answers directly from Katharine Lemansky.  When asked if she had any comment about the accusations brought against her, she replied, "No I don't."

People all over the world have a lot of comments about a photograph police say Katharine Lemansky posted on Facebook last month. The photo shows a chocolate lab-mix dog, with duct tape around its muzzle and a caption which read, "This is what happens when you don't shut up!!!"

FOX 35 caught up with Lemansky at the Wake County Justice Center in Raleigh, North Carolina.   When asked about the international reaction to the Facebook post, Lemansky said, "No comment at this time, thank you."

Lemansky's Facebook page listed her name as Katie Brown and her location as South Daytona, Florida. South Daytona police said she hasn't lived there in over a year, but they received thousands of inquiries about the post and launched an initial animal cruelty investigation.

Officers tracked her down in Cary, North Carolina which is where she admitted the incident took place, according to authorities. With reporters who were surrounding her asked how is Brown, the dog, Lemansky said, "She is fine, thank you."

Lemansky, who is facing an animal cruelty charge, was appointed a public defender Monday morning.  "No comment please. May I please do my paperwork?" she insisted. "Please have a little respect for me. Just this much."

When asked if she wanted to get her story out to the public,  Lemansky provided no answer and continued walking at a brisk pace.

Lemansky is due back in court January 5, 2016 in Raleigh, North Carolina. 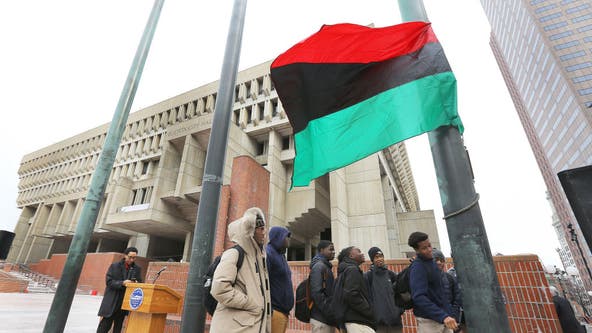