Will Smith's mother is speaking out about the actor's Oscar win and the viral moment he slapped Chris Rock across the face, just minutes prior.

In an interview following the awards show, Carolyn Smith shared how proud she is of her son on his first Oscars win.

Carolyn added that she woke up early on Oscars Sunday and gave her son a special shout-out in the family's group text.

"I started out saying, 'Good morning, we've got to say good luck to Uncle Will," she recalled.

Carolyn Smith was joined by the actor's sisters and other relatives as they watched the ceremony from a family home in Philadelphia.

Addressing the viral moment of his onstage violence, Carolyn Smith suggested her son had never been confrontational like that.

"He is a very even, people person. That's the first time I've ever seen him go off," she said.

"First time in his lifetime... I've never seen him do that," Smith's mother added.
Despite the on-camera scandal, Carolyn Smith concluded that she is "proud of him being him." 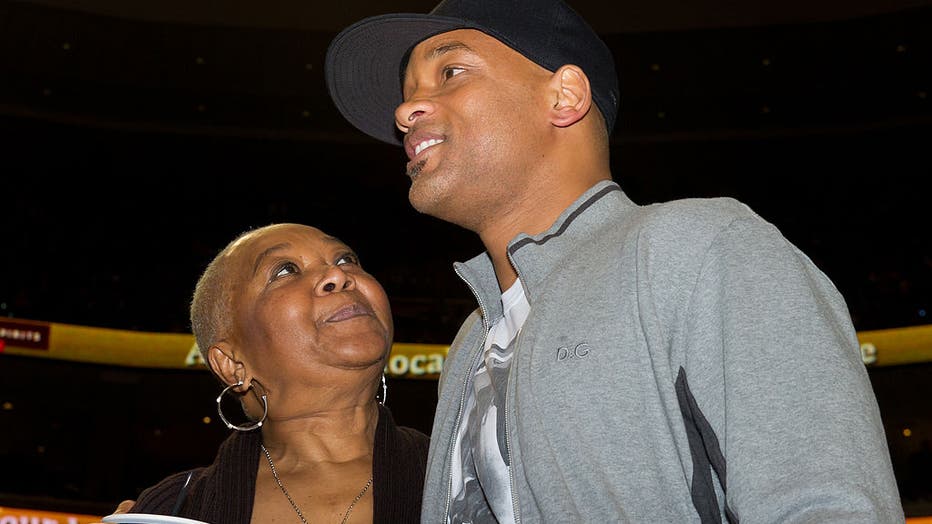 PHILADELPHIA, PA - MARCH 16: Will Smith (R) and his mother Carolyn Smith attend the Miami Heat vs. the Philadelphia 76ers game at Wachovia Center on March 16, 2012 in Philadelphia, Pennsylvania. (Photo by Gilbert Carrasquillo/Getty Images)

Meanwhile, Smith's younger sister Ellen reflected on what her famous brother has overcome to get to where he is today in his acting career.

"I've had conversations with him, and it like really kind of broke my heart listening to the things he's said he had to go through to get to where he is," she said.

Smith stunned the Dolby Theatre crowd and viewers at home when he took the stage during Rock's remarks after the comedian made a joke about Jada Pinkett Smith, Smith's wife. Rock turned to Pinkett Smith and said, "Jada, I love you. ‘G.I. Jane 2,’ can’t wait to see it."

The joke touched a nerve. Pinkett Smith, whose head is shaved, has spoken publicly about her alopecia diagnosis. Rock has also previously joked about her. Rock hosted the 2016 Oscars, when some were boycotting the ceremony over the #OscarsSoWhite group of nominees, including the Smiths. Said Rock: "Jada boycotting the Oscars is like me boycotting Rihanna’s panties. I wasn’t invited."

RELATED: Will Smith issues apology to Chris Rock after Oscars slap: 'I was out of line'

Smith strode on stage and slapped the comedian across the face. Back in his seat, Smith twice shouted for Rock to "get my wife’s name out your (expletive) mouth." His words echoed clearly throughout the Dolby, though ABC cut the audio for about 15 seconds. Within an hour, Smith won best actor. During his acceptance speech, Smith apologized to the Academy.

Oscar watchers were shocked when Will Smith stepped on stage and slapped Chris Rock after a joke the comedian made about the actor's wife, Jada Pinkett Smith. The Los Angeles Police Department revealed that they asked Rock whether he wanted to file a police report requesting charges be pressed against the now Academy Award-winning actor over the incident.

In a statement Monday, a spokesperson for the film academy told Variety: "The Academy condemns the actions of Mr. Smith at last night’s show. We have officially started a formal review around the incident and will explore further action and consequences in accordance with our Bylaws, Standards of Conduct and California law."

The Academy previously issued a statement on Sunday, stating that it "does not condone violence of any form."

After the Academy confirmed it's launching a formal review, Smith issued a public apology to Rock.

His full statement reads: "My behavior at last night’s Academy Awards was unacceptable and inexcusable. Jokes at my expense are a part of the job, but a joke about Jada’s medical condition was too much for me to bear and I reacted emotionally."

"I would like to publicly apologize to you, Chris. I was out of line and I was wrong. I am embarrassed and my actions were not indicative of the man I want to be. There is no place for violence in a world of love and kindness."

"I am a work in progress. Sincerely, Will."

The Associated Press contributed to this report. Read more of this story on FOX News.