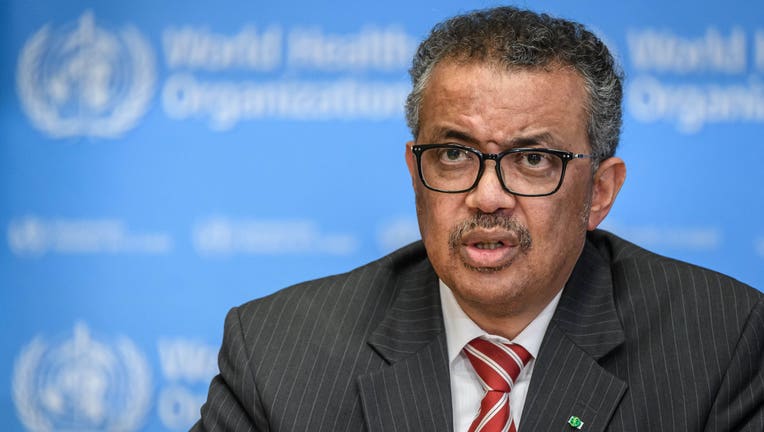 World Health Organization (WHO) Director-General Tedros Adhanom Ghebreyesus attends a daily press briefing on COVID-19 at the WHO headquarters on March 11, 2020 in Geneva. (Photo by FABRICE COFFRINI/AFP via Getty Images)

The World Health Organization Director-General Tedros Adhanom Ghebreyesus described the coronavirus as a “once-in-a-century health crisis” that has been able to spread rapidly, similar to the 1918 flu pandemic, and said he hopes it'll be over in 2 years.

But he also said that because of technological advances in medicine during the last century, there is a greater possibility it can be stopped before reaching that level of devastation.

“We hope to finish this pandemic (in) less than two years, especially if we can pool our efforts,” Tedros said Friday during a press briefing.

The 1918 influenza infected 500 million people and killed around 50 million worldwide, according to the Centers for Disease Control and Prevention.

WHO’s chief of Health Emergencies, Dr. Michael Ryan, also pointed to the differences between the coronavirus and 1918 flu.

Ryan noted that there were three distinct waves that occurred with the 1918 pandemic, the second wave being the most devastating to the population.

“This virus is not displaying a similar wave-like pattern,” Ryan said. “When the virus is not under control, it jumps straight back up.”

The flu also operates seasonally and that has not been the case for the coronavirus, which has stayed strong well into the summer in some parts of the globe, including the U.S.

“That means every person and family has a responsibility to know the level of transmission locally, and to understand what they can do to protect themselves and others,” Tedros said Friday.

“Throughout history, outbreaks and pandemics have changed economies and societies. This one will be no different,” he added.

Tedros explained that the lack of pollution from a world put on pause due to the pandemic, has created a new “impetus” in countries worldwide to maintain the healthier environmental living standards that have arisen.

“The pandemic has given us a glimpse of our world as it could be: cleaner skies and rivers,” Tedros said, before using a catchphrase that has come to have a political meaning in the U.S. “Building back better means building back greener."

The WHO could not be reached to confirm whether Tedros intended to use a phrase that the Democratic presidential candidate Joe Biden has coined his campaign slogan, “Building Back Better.”

The Trump administration has been highly critical of the WHO, accusing them of China-centric policies, and pulled the U.S. out of the organization in July.

The director-general said that the global community needs to use the pandemic recovery as an opportunity to start making changes that will address climate change and environmental discrimination.

“Forty million health professionals from 90 countries have sent a letter to G20 leaders to call for a Healthy Recovery from COVID-19,” he said. “And we have seen many examples of countries acting to protect lives, livelihoods and the planet on which they depend.”

Tedros explained that the U.K. had its lowest coal emissions, the most polluting form of energy, in 250 years in 2020, after the pandemic.

Pakistan has set up a “green stimulus” scheme, which pays people who have lost their jobs as a result of the coronavirus, to plant trees.

Spain has become one of the fastest decarbonizing nations in the world, shutting down seven of the country’s 15 coal-fired power stations.

And Portugal will be coal-free by next year.

Hardship is an opportunity to learn, grow and change,Tedros said.