A white middle school student allegedly spat on a black visitor at the Smithsonian’s National Museum of African American History and Culture in Washington D.C. on Friday during a class trip, according to school officials.

WASHINGTON - A white middle school student allegedly spat on a black visitor at the Smithsonian’s National Museum of African American History and Culture in Washington D.C. on Friday during a class trip, according to school officials, leading to the group’s ejection from the museum and sparking controversy on whether the action was racially motivated.

The incident involved an unidentified male student from Shelton Intermediate School in Shelton, Connecticut, who was on an annual school trip to the nation’s capital, according to the school district.

In since-deleted tweets that media outlets previously captured, the school’s principal Dina Marks said Saturday morning that she believes the incident was not racially motivated.

Marks called it “an act of stupidity, disinterest, & immaturity” and said it was “completely inappropriate.” The principal, who was on the trip with the students, said a student spat over the balcony and it hit a black visitor below. 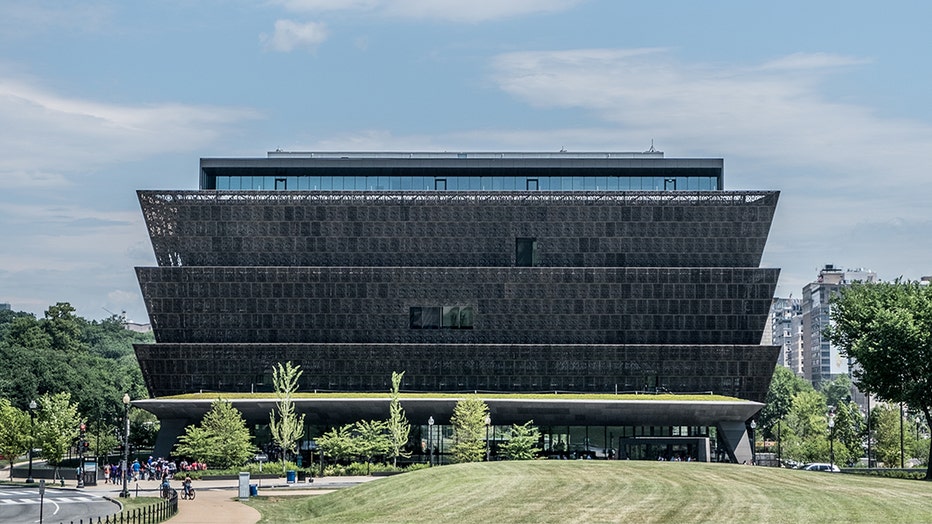 FILE: The building of the National Museum of African American History and Culture at Washington D.C. on June 21, 2017. (Photo by: Avalon/Universal Images Group via Getty Images)

“The incident at the African American Museum involved a student spitting over a balcony. It allegedly hit a visitor, a person of color. It was an act of stupidity, disinterest, & immaturity, completely inappropriate, but I believe, not racially motivated against that person,” Marks tweeted.

“Kids back at hotel in rooms. An unfortunate incident tonight. Our kids are not bad people. We are all pretty sad tonight, but I love my Vikings. #whatyoudomatters," she said in another tweet.

The school district’s superintendent released a statement on Friday, saying he was “saddened” about the matter.

“To the Community of the Shelton Public Schools: I am saddened to inform you that on the annual Washington D.C. trip the group from our SIS was thrown out of the Smithsonian’s highly regarded African American History Museum. Why? Because a student, a White male, spit on a Black visitor at the Museum,” said Chris Clouet, superintendent of Shelton Public Schools.

Clouet continued, “this kind of action” from the student “is not a reflection of who our students are, or who we are as a community.”

“This is not the time or place to talk about consequences,” he said. “But this is now, regrettably a pattern of behavior that is disrespectful and does not serve anyone well—including the student who acted inappropriately and embarrassed himself and his school.”

The superintendent added that “we will deal with this at school.”

“But we need the help and support of families. Please speak to your own children in an age-appropriate manner about our expectation of how we treat people: Black or White, elder or young, or anyone, a child (or adult!) may perceive as being different,” he said.

“Shelton schools and the Shelton community can do better! We must!” Clouet said.

The superintendent’s office did not immediately respond Monday to a request for further comment on the incident and the potential consequences that the student could face.

“Far too often unkind acts in our world are excused because it was ‘only a joke,’” Clouet told the Hartford Courant Friday. “The individual who was spit on may not see it as a joke.”

“I suspect it may have been more rude than racist. Not certain how the visitor to the museum on the receiving end of the act would perceive it,” he said. “Shelton is not especially racist or biased as a community. Nor is it free of such sentiments.”

Clouet told the paper that unspecified “school-based discipline” will be imposed.

Greg Johnson, president of the Ansonia Valley NAACP, also told the Courant that the location of the incident is evidence that the incident was not a neutral act of childish behavior.

“He didn’t spit on anyone at the Washington Monument or the Lincoln Memorial,” Johnson said. “A total and complete lack of respect and one of the most degrading acts one can commit against another.”

The National Museum of African American History and Culture did not immediately respond to a request for comment.