A retired Orlando police officer who was shot in the line of duty during a deadly standoff in 2018 has died.

ORLANDO, Fla. - A retired Orlando police officer who was shot in the line of duty during a deadly standoff in 2018 has died.

"Officer Valencia risked his life for people he didn't even know -- a risk that many in the law enforcement profession take without question," Chief Rolon said.

On July 11, 2018, Valencia was nearly killed by a domestic violence suspect. He responded to the Westbrook Apartment Complex, near Universal Studios, where a convicted felon was holed up with four children who he eventually killed. Officer Valencia was shot in the head during the incident.

Meghan Valencia talks with FOX 35's Amy Kaufeldt in an emotional interview about her husband's fight for survival after being shot while on duty in 2018.

RELATED: Sergeant disciplined for telling Officer Kevin Valencia to kick-in door before he got shot

Valencia was left in a coma and eventually moved to a recovering facility in Atlanta for treatment. However, he was brought back to Central Florida in 2019.

A retirement ceremony was held for Valencia in October of last year, when he was honored with several awards, including the Purple Heart.

His wife also announced that Kevin is beginning to show signs of improvement. 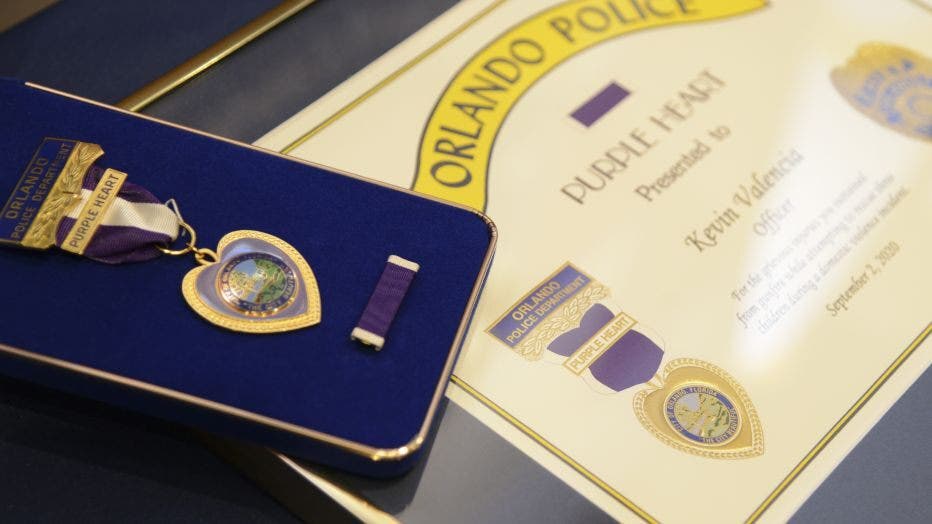 The Orlando Police Department awarded Officer Kevin Valencia with a Purple Heart during a retirement ceremony in Oct. 2020.

At the time, his wife Meghan said her husband was beginning to show signs of improvement. He reached a milestone, emerging from his coma, and had limited interaction with Meghan, rubbing her hand and kissing her head.

"It was just everything I needed in that moment...that moment, my heart was kind of like, 'He's still in there!'" Meghan told FOX 35's Amy Kaufeldt.

News of Valencia's death prompted an outpouring of thoughts and well-wishes for his family.  Orlando Mayor Buddy Dyer tweeted that the entire city mourns his passing.

"He put his life on the line and made the ultimate sacrifice. Our prayers and support go out to his family, friends, and co-workers as we honor his life and his selfless service to our community," Dyer wrote.

Valencia was given an escort on Monday evening by officers with the Orlando Police Department, as well as those from other agencies.

"We stand together to honor the hero, husband, father, son, brother, and friend who selflessly gave his life to protect the city he served," Chief Rolon added.

The Orlando Police Department and other agencies gave a final salute and escort to Officer Kevin Valencia. He was shot in the line of duty during a deadly standoff in 2018. Orlando Police Chief Orlando Rolon announced his passing on Monday.

Valencia is survived by his wife and their two young children, Kaleb and Kolton, whom Chief Rolon said, "will always be family to the Orlando Police Department."

Funeral arrangements will be provided once details are confirmed, according to the department.