Representatives for the Orlando Police Department said Sgt. Amanda White received an eight-hour suspension after violating department policy when she instructed an officer to kick-in a door during a standoff. It resulted in the officer being shot.

ORLANDO, Fla. - An Orlando police sergeant who responded with Officer Kevin Valencia on the domestic violence call - where Valencia was shot in the head by a suspect - was found to have acted in violation of department policy, according to a newly released internal affairs report.

Representatives for the Orlando Police Department said Sgt. Amanda White received an eight-hour suspension due to her actions on the call.

According to the report, Sgt. White and Valencia were among a group of officers that responded to the Westbrook Apartments in the early morning hours of June 10, 2018.

They were responding to a 911 call from Ciara López who had fled the apartment, claiming her boyfriend, Gary Wayne Lindsey Jr., had battered her and was still in the apartment with her four children.

López reported to the officers that Lindsey was in possession of a gun, according to the report.

During interviews with internal affairs investigators, the officers on the call stated that López provided them with a key to enter the apartment, but when Officer Valencia tried using it on the door, he was quoted as telling Sgt. White, “I think he’s holding it, Sarge,” before the key ultimately broke off in the door.

According to the report, White told investigators they didn’t hear or see any movement in the apartment and that knowing Lindsey’s criminal history she worried for the kids’ safety. So, acting on a "gut feeling," she instructed Valencia to "boot" the door. 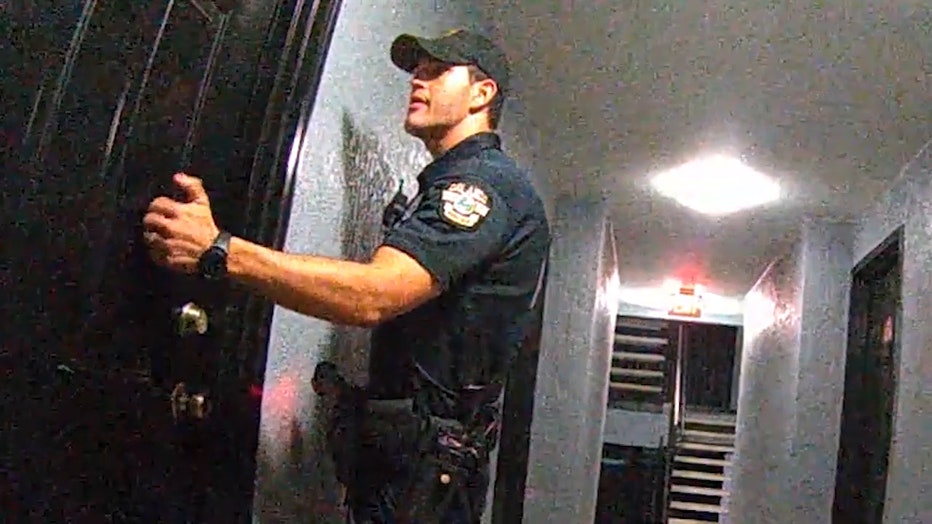 According to the report, it was after Valencia started kicking the door, attempting to breach it, that a single shot was fired through the door from inside, striking Officer Valencia in the head.

Another officer then fired several shots back into the door of the apartment as the team moved Valencia from the scene and to help.

That incident began a day-long standoff in which Lindsey shot and killed himself and all four of the kids in the apartment.

The officer who fired back at the apartment door was cleared of any wrongdoing by internal affairs investigators.

Internal affairs interviewed Sgt. White multiple times about the decision to have Officer Valencia kick the door, and wrote that White felt the decision was justified given the circumstances that night.

"I'd been feeling during that time that the ... the whole gut feeling thing, like it wasn't right,” the report says Sgt. White said in one of the interviews. “There was something wrong inside. The feeling coming from out of that apartment wasn't right, so when the key broke off it was like an instant, 'OK, we have to go right now' ... Don't know why the key broke off. I know that Kevin was saying he felt like maybe this guy was holding it. But it was unknown if he was. Like I don't know if ... like what was running through my head was it could be him, it could not be him. He could have barricaded the door. He could have left the kids alone inside. Like there was a lot of stuff going on in my head about what's happening in there. Along with it wasn't feeling right either coming from the inside of the apartment, so it was just an instant, 'we got to go.'”

The investigator wrote in his conclusion that he determined Sgt. White made the decision in "good faith," but ultimately the decision went against department policy and the 4th Amendment.

“Clearly this incident ended with an extremely unfavorable conclusion,” the investigator wrote. “After a careful review of all the evidence, statements and source documents it was concluded that the decision to kick the door made by Sgt. Amanda White was made in good faith, but was not made to an acceptable standard of performance and was NOT within Orlando Police Department's Policies and Procedures.”

Again, department leaders report that Sgt. White was handed an eight-hour suspension as a result.

The department issued the following statement on the report Friday:

"We continue to pray and support Kevin and his family during this difficult time. In the law enforcement profession, we find ourselves having to make split-second decisions for the safety of our citizens. June 10, 2018, is a date that was a tragedy for everyone involved. Innocent lives were lost and others changed forever. Although the actions taken that day were in the interest of the safety of all involved, the agency's investigation revealed that department policies were violated and discipline was issued."

FOX 35 News reached out to the attorney representing Officer Valencia’s wife in a lawsuit against the apartment building, but as of publication has not received a response.

Officer Valencia remains in a coma.