A Central Florida K-9 took down a man wanted in connection to the murder of a carjacking victim in May, the Volusia County Sheriff's Office said.

VOLUSIA COUNTY, Fla. - A Central Florida K-9 took down a man wanted in connection to the murder of a carjacking victim in May, the Volusia County Sheriff's Office said.

A video posted by the sheriff's office on Facebook shows K-9 Red helping to take Nassan Bacon, 22, into custody on Thursday. Deputies said Bacon – along with two others – were indicted this week for first-degree murder in connection to the shooting death of a man during a carjacking outside Florida Technical College.

Detectives said they have been in the New Smyrna Beach area conducting surveillance on Bacon, who reportedly had active warrants for aggravated battery with a firearm and aggravated assault with a firearm.

Torres and Thomas were already booked in jail facing charges for an attempted carjacking outside a Walmart in DeLand.The two made their first appearance on the new charges where a judge ordered they be held without bond. Bacon is still in the hospital recovering from injuries sustained in the takedown.

Another suspect, 24-year-old Estella Luna, also appeared in court Friday. She is charged in connection with the Walmart attempted carjacking case along with Torres and Thomas. She faces principal to carjacking, principal to burglary, assault, and battery. 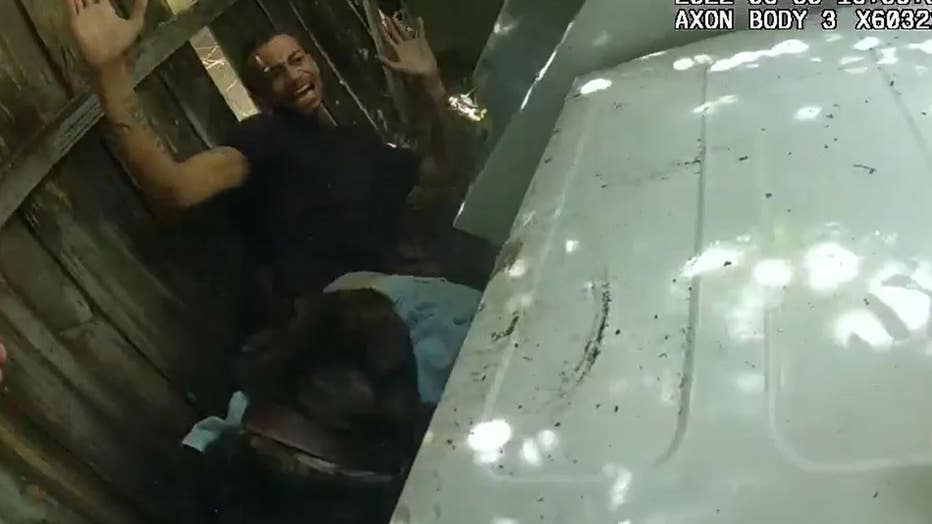 Deputies said Bacon was recently seen purchasing a 60-round AK-47 magazine at a New Smyrna Beach gun store. On Thursday, detectives and task force agents spotted Bacon in a vehicle on Dimmick Street with two others. When officials attempted to take him into custody, he allegedly took off running and hid behind a house.

That's when K-9 Red was brought in to assist.

"K-9 Red, Deputy Brett Whitson's new partner following the retirement of K-9 Endo, quickly tracked Bacon to his hiding spot behind a washer, dryer, and other scrap metal. Bacon was taken into custody, treated for a bite injury on scene, and then transported to the hospital for further treatment," the sheriff's office said.

Detectives said two other people in the vehicle were found to be carrying concealed firearms and charged accordingly.

This was K-9 Red's first apprehension of his career.

"Thank you to this entire crew for working so hard to track down violent criminals wherever they hide!"