This was a fitting flight to launch what some Disney Imagineers are calling their most ambitious ride yet.

ORLANDO, Fla. - A crowd of bloggers and reporters erupted in applause as two huge, drone X-Wing Fighters rose above the scenery at 'Star Wars: Galaxy’s Edge' on Wednesday night. This was a fitting flight to launch what some Disney Imagineers are calling their most ambitious ride yet.

'Star Wars: Rise of the Resistance' will place riders in the middle of a battle between the 'Resistance' and the 'First Order' after taking off from Batuu in a transport ship. They receive orders from Rey and droid BB-8 to welcome new Resistance recruits and reunited with General Leia Organa at an off-planet location. While on the way, riders are captured by a First Order Star Destroyer. With the help of the Resistance, they must seek to escape Kylo Ren and the First Order.

Walt Disney World describes the ride as the "most ambitious, immersive, advanced, action-packed attraction we've ever created." It is one of their longest attractions, clocking in at about 15 minutes. It features two full-size AT-AT walkers, a Star Destroyer hangar bay, a TIE fighter, and a garrison of Stormtroopers. It also features multiple ride systems, special effects, and realistic Disney A-1000 Audio-Animatronics figures.

During the ceremony, cast members tried to bring the smallest details of the Star Wars world to life. The creators of the ride said that was absolutely a must in bringing Rise of the Resistance alive. 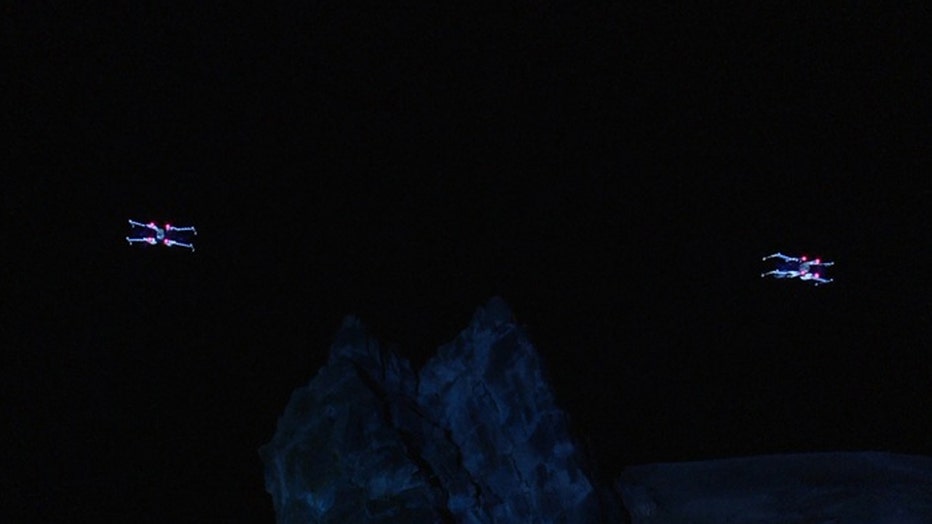 "We knew that we had to just nail this and get it right for our fans," said a Disney Imagineer named Greg. "So we were so meticulous, we worked with Lucas Films and our team pulled it all together."

As a giant fireworks display shot off over Disney Hollywood Studios Wednesday night, the cast declared the new ride ready for fans.

"It's my honor to invite guests to live their very own Star Wars adventure," said Chapek.

RELATED: Download the FOX 35 News app to watch the full 'Rise of the Resistance' ride video

Star Wars: Rise of the Resistance opens on December 5.