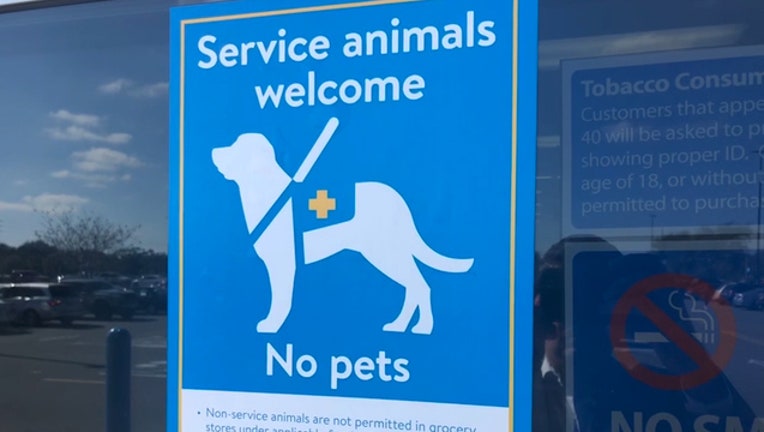 MELBOURNE, Fla. (WOFL FOX 35) - Purse dogs and snuggle buddies are not permitted in Walmart stores.  Instead, only service animals will be allowed, after a wave of people have been stretching the rules, the retail giant says.

The policy is not new, but those reminders right when you go in to shop are. Advocates for the disabled in Brevard County are applauding Walmart for trying to stop the trend of people making false claims that their dog is performing a vital function.

The blue and white sign reminds shoppers of the big difference, and a legal one, between your pet and a certified service animal.  Therapy dogs or comfort dogs are not considered service animals, under the policy.

“So when people are thinking about service animals, generally they are thinking about guide dogs or persons in a wheelchair that might need some sort of assistance,” says Rosemary Miles, Executive Director for the Space Coast Center for Independent Living.

Miles helps the disabled in many aspects of their lives and says the public perception of service animals needs to be fine-tuned.  She says awareness is key.

For instance, a dog that can detect an oncoming seizure is absolutely a service animal, but a dog for anxiety management is not.

“A person might think that’s not a service animal, and it really well could be,” Miles explains.

To profile a service animal, we found a golden retriever named Cersei. She can be fitted with a harness  for mobility and support. Asia Lewis trained her.

“Her owner also suffered from fainting spells -- she’s a younger girl in high school. Cersei was the best fit for her -- very mild-mannered.  She loves people, but not too social to the point where she would lose sight of her task, which was to look after her owner,” Lewis says.

As a demonstration, Asia showed us her own dog, Finn.  He got the same type of obedience training as Cersei, but Asia says despite the incredible discipline, Finn is just her pet and she’d never try to misrepresent that.

“Because it takes away from those who really need it. Walmart is not doing anything wrong. I agree with them. There should not be any dogs in there, unless they are service dogs,” Lewis says.