Wednesday's vice presidential debate had sharp moments, some modest interruptions and violations of the debate clock.

SALT LAKE CITY - Vice President Mike Pence and California Sen. Kamala Harris clashed Wednesday on the administration's handling of the coronavirus pandemic during the only vice presidential debate of the 2020 election — speaking while separated by more than 12 feet and plexiglass.

The event, held at the University of Utah in Salt Lake City, was a more civil one compared to last week’s presidential debate between President Donald Trump and Democratic nominee Joe Biden, and featured less interruptions. 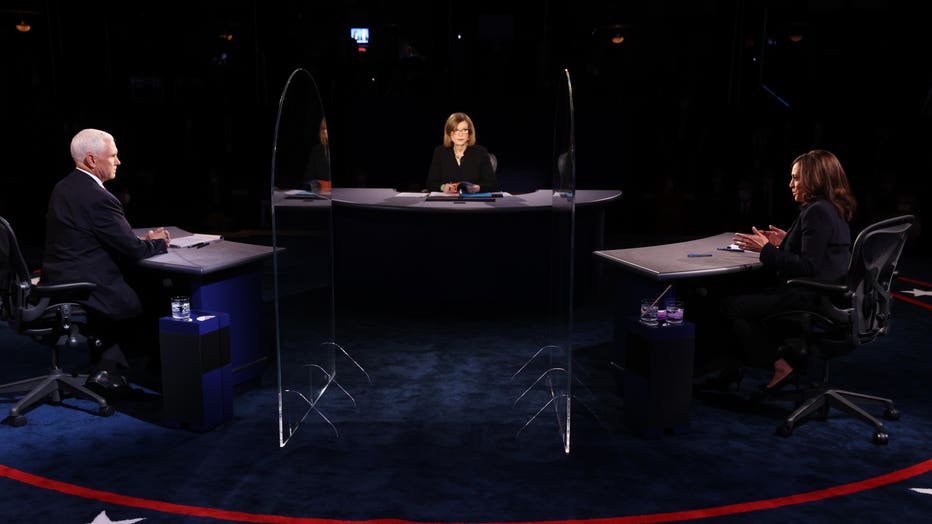 An uninvited participant even made an appearance: a fly that landed on Pence’s hair — setting social media abuzz.

The debate’s moderator, USA TODAY’s Susan Page, started the conversation with a question about the coronavirus pandemic, which has resulted in the death of more than 210,000 Americans.

The event took place as Trump recovers at the White House after testing positive last week for the coronavirus and spending three days at Walter Reed Military Medical Center.

“The American people have witnessed what is the greatest failure of any presidential administration in the history of our country,” Harris said of the Trump administration’s pandemic response. “They knew what was happening and they didn’t tell you.”

The coronavirus pandemic was the first topic at the vice presidential debate.

Pence noted the Trump administration’s suspension of all travel from China at the onset of the outbreak, and said the president “has put the health of America first.”

“When you look at the Biden plan, it reads an awful lot like what President Trump and I and our task force have been doing every step of the way,“ Pence said. "It looks a little bit like plagiarism, which is something Joe Biden knows a little bit about."

Pence touted the speed at which experimental COVID-19 treatments and vaccines have been developed under the Trump administration. While there has not yet been a vaccine approved, there are currently several in large-scale efficacy trials.

“Under President Trump’s leadership and Operation Warp Speed, we believe we’ll have literally tens of millions of doses of the vaccine before the end of this year,” Pence added.

Over the last week, several politicians connected to Trump’s orbit have confirmed that they tested positive for COVID-19, sparking concern over whether the vice presidential debate could even happen safely and efficiently. The vice president has continued to test negative for the coronavirus.

Harris and Pence were separated by a transparent barrier to reduce the risk of coronavirus transmission on stage. The candidates appeared on stage exactly 12.25 feet apart, and audience members were required to wear masks.

Transparency, taxes and the economy

“I literally said, ‘You mean $750,000?’ No, $750,” Harris said about the report. Trump has refused to release his tax filings and is the only president in modern times not to make them public.

Harris slammed Trump’s lack of transparency, saying Biden has been transparent “for years.”

In a strategic move hours prior to the first presidential debate, Biden released his 2019 tax returns just hours before the debate, showing that he and his wife, Jill, paid almost $300,000 in federal taxes in 2019, including almost $288,000 in personal income tax.

“When we say in debt, it means you owe money to somebody, and it would be really good who the president of the United States, the commander-in-chief, owes money to. Because the American people have a right to know what is influencing his decisions,” Harris added.

On taxes and the U.S. economy, which has been rattled amid the pandemic with record job loss, Pence said Trump has “cut taxes across the board” and claimed that Biden would raise taxes “on day one” in office.

“President Trump cut taxes across the board. Despite what Senator Harris says, the average American family of four has $2,000 in savings in taxes,” Pence said.

“We literally have spared no expense to help the American people and the American worker through this,” Pence said, noting the $2 trillion coronavirus relief package passed by Congress in March.

On the topic of health care, Harris slammed the Trump administration’s support of the challenge to the Affordable Care Act before the Supreme Court. On Nov. 10, the court is scheduled to hear oral arguments in a case seeking to overturn the law.

"If you have a pre-existing condition — heart disease, diabetes, breast cancer — they're coming for you," Harris said. “If you are under the age of 26 on your parents’ coverage, they’re coming for you.”

Pence responded by saying, "Obamacare was a disaster. The American people remember it well."

He said the Trump administration has a plan to cover people with pre-existing conditions.

Officials in California on Sunday announced that wildfires this year have burned a record 4 million acres, an area larger than the state of Connecticut. Meanwhile, the 2020 Atlantic hurricane season has already broken its own records, according to the National Oceanic and Atmospheric Administration.

Page asked both candidates directly about their respective stances on the issue, and whether the candidates considered climate change to be “an existential threat.”

“With regard to climate change, the climate is changing. This issue is what’s the cause, what do we do about it,” Pence said. “Trump has made it clear that we’re going to continue to listen to science.”

The vice president said he was proud of the administration’s record on the environment and conservation, noting the Great American Outdoors Act, a law aimed at restoring national parks, forests, monuments and other public lands.

He said the country doesn't need a $2 trillion Green New Deal, a proposed package of legislation that aims to tackle climate change, while Biden's campaign calls it “a crucial framework for meeting the climate challenges we face.”

“According to all of the best estimates, our air and land are cleaner than any time ever recorded. Our water is among the cleanest in the world,” Pence said.

Harris noted that the Trump administration took the word science “off the website,” referring to the official White House website.

“We have seen a pattern with this administration, which is they don’t believe in science,” Harris said. “And Joe’s plan is about saying we’re going to deal with it, but we’re also going to create jobs.”

On the topic of fracking, Harris said Biden “will not ban fracking. That is a fact.”

“You said on multiple occasions when you were running for president that you would ban fracking," Pence said.

Following the death of the late Justice Ruth Bader Ginsburg, Trump nominated Judge Amy Coney Barrett, a federal appellate judge and someone who has established herself as a reliable conservative on several legal issues.

Ginsburg’s death set off a battle over whether her seat should be filled so close to the Nov. 3 election. Senate Republicans are readying for confirmation hearings, with a vote in the full chamber expected before Election Day.

During the first presidential debate, Trump criticized Biden over his refusal to say whether he opposes mounting calls from some lawmakers and progressive activists to add members to the Supreme Court to outweigh what would become a conservative-majority with Barrett’s confirmation. Pence echoed that line of attack in the vice presidential debate.

Pence called Barrett “a brilliant woman” who would bring “a lifetime of experience” to the high court. He also implored Americans who “cherish your Supreme Court” to “reject the Biden-Harris ticket come November.”

Harris countered that the Trump administration has stacked federal courts nationwide with White conservatives, accusing Pence of participating in a different version of court packing.

“This is what they’ve been doing. You want to talk about packing the court. Let’s have that discussion,” Harris said. “Let’s go on and talk about the issue of racial justice.”

Harris said she did not believe justice has been served in the case of Breonna Taylor, a Black woman who was killed March 13 by police in a drug raid in Louisville, Kentucky.

Taylor, a 26-year old emergency medical worker, was shot multiple times by officers. The three officers entered her home using a no-knock warrant during a narcotics investigation in the late evening. The warrant used was connected to a suspect who did not live there, and no drugs were found inside. The officers fired after Taylor's boyfriend, Kenneth Walker, fired a shot that struck an officer. Walker said he didn't know police were at the door and thought it was an intruder.

Kamala Harris and Mike Pence speak on race in America

Both vice presidential candidates speak on race, the case of Breonna Taylor and the recent protests that have erupted across the country.

Last month, a grand jury did not indict any officers for their role in Taylor’s death. One officer was indicted on wanton endangerment charges for firing into neighboring apartments.

Harris said a Biden administration would ban chokeholds and require a national registry for police officers who break the law. She added that George Floyd, a 46-year-old Black man who was killed while being arrested in Minneapolis, would be alive if such a ban existed.

Pence said Taylor’s family “has our sympathies, but I trust our justice system, a grand jury that reviews the evidence.”

He added that there is no excuse for what happened to Floyd, who was killed after police pressed on his neck with a knee for several minutes, and said “justice will be served.”

But Pence said there is no excuse for the rioting and looting that followed Floyd’s death. Pence’s guests in the debate hall included Ann Marie Dorn, the widow of retired St. Louis police captain David Dorn, who was shot to death on June 2 after a violent night of protests.

“I want everyone to know who puts on the uniform of law enforcement every day that President Trump and I stand with you,” Pence added.

The candidates also discussed the issue of the election itself. Trump has repeatedly cast doubt on the integrity of the upcoming presidential race with unsubstantiated claims about voter fraud and mail-in ballots. Trump has also declined to commit to a peaceful transfer of power if he loses — and said he expects the election to "end up in the Supreme Court."

“We believe in the American people, we believe in democracy,” Harris said. “And here’s what I’d like to say to everybody: vote. Please vote. Vote early.”

When asked specifically about Trump’s refusal to accept a peaceful transfer of power and what his role would be in that scenario, Pence said, “First and foremost, I think we’re going to win this election.”

The vice president went on to note Trump’s record on “tax cuts” and “fighting for fair trade,” and said Trump has “launched a movement of everyday Americans from every walk of life.”

“But when you talk about accepting the outcome of the election, I must tell you, Senator, your party has spent the last three and a half years trying to overturn the results of the last election,” Pence said, addressing Harris. “It’s amazing.”

Ultimately, the debate served as a chance for voters to decide which candidate would best support the president of the United States.

The second presidential debate is slated for Thursday, Oct. 15.

Biden said this week that he and Trump “shouldn’t have a debate” as long as the president remains positive for the coronavirus. Biden said that he’s “looking forward to being able to debate him,” but said “we’re going to have to follow very strict guidelines.”

Trump on Tuesday said he was “looking forward” to the event, less than 24 hours after being discharged from the hospital. The Trump campaign’s communications director, Tim Murtaugh, also said in a statement that the president “intends to participate in the debate in person.”

This story was reported from Los Angeles and Cincinnati. The Associated Press contributed.