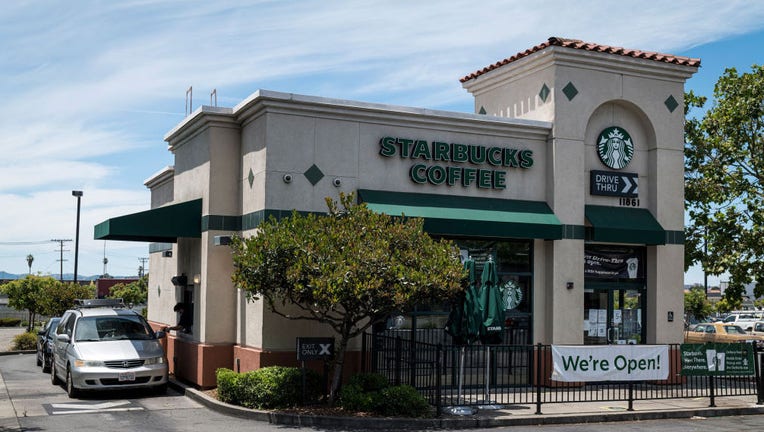 Vehicles stand in a drive-thru line at a Starbucks Corp. store in Richmond, California, in 2020. (David Paul Morris/Bloomberg via Getty Images)

WASHINGTON - Starbucks and Volvo are giving customers a new way to recharge through the launch of a new pilot program. The two companies are teaming up to add charging stations at 15 Starbucks locations between Denver and Seattle.

The auto manufacturer is installing 60 Volvo-branded ChargePoint DC fast chargers at these stores. The charging stations are accessible for all electric vehicle drivers at an unspecified cost. However, Volvo drivers can use these spaces for free or a "preferred rate."

RELATED: EVs: Here's what you should know as interests in electric cars rise amid high gas prices across the U.S.

Electric vehicles are cars that have an electric motor instead of a internal combustion engine that powers many cars. These vehicles use a large battery pack to power the electric motor, according to FOX 10 Phoenix.

An electric car requires a special type of fueling station to power it back up, and charging these vehicles can take varying amounts of time, depending on which type of charger is used: Level 1, Level 2, and Level 3 DC Fast Charging.

Level 1 charging uses a home outlet, used for every day use, to charge an electric car. This charger gives the driver three to five miles of range for every hour it’s connected to the vehicle. Depending on model of the electric vehicle, Level 1 charging could take a long time for the car to charge.

RELATED: Volvo aims for all cars to be leather-free and fully electric by 2030

While Level 1 charging is longer, Level 2 charging provides the quickest time to charge an electric vehicle at home because it uses outlets for large appliances to charge the car.

Level 3 charging stations are faster than Level 1 and Level 2 charging, but are not available for at-home use. These stations can charge an electric car up to 80 percent in less than an hour, but using this type of charging can impact the car battery pack’s duration.

FOX 10 Phoenix, citing Greencars.com, reported that electric car owners should avoid using DC fast charging as a primary way charge up their battery, keep their car charged between 60% to 80%, and avoid extreme temperatures over long periods of time.

The new partnership between Volvo and Starbucks is a part of an effort by both companies to produce environmentally-friendly products to preserve the planet. Starbucks launched a number of renewable energy and decarbonization (carbon removal) projects including electric vehicle charging at store locations.

Starbucks said it plans to reduce waste by 50% by 2030 to help preserve the planet. Before they announced the Volvo pilot program, Starbucks started a reusable cup program, and a waste and recycling app that details waste reduction and recycling best practices, according to the company’s website.

In September 2021, Volvo announced a plan to manufacture vehicles that are completely leather-free, an effort the company called called "a step in the right direction" as more consumers seek ethical and sustainably sourced products.

Volvo added that they plan to release fully-electric cars in the coming years, with a goal to only offer fully electric leather-free cars by 2030.

FOX 10 Phoenix, FOX 6 Milwaukee and the Associated Press contributed to this story. This story was reported from Washington, D.C.