A video from police show a man and woman trying to fight the carjacker off.

DAYTONA BEACH, Fla. - Video released by police shows an incident where a carjacker stole a vehicle with a child still in the backseat. The victims attempt to fight the carjacker off, clinging onto the vehicle as he speeds away and into a concrete pole.

The Daytona Beach Police Department said that the incident occurred on August 10th at a 7-Eleven on International Speedway Boulevard. Officers were called there in reference to a fight.

They said officers obtained video of the incident from the store. It shows a man exit a Dodge Charger parked in front of the store and walks to the passenger side of the vehicle. A woman then gets out of the passenger seat.

They are both standing by the vehicle when a man, identified in the arrest affidavit as 34-year-old Ayodele Akiode, approaches the driver side of the Charger, gets in, and starts to drive away.

At that point, the video shows the woman jump through the passenger side of the vehicle, with the top portion of her body inside the car. The other victim runs to the driver's side of the vehicle and jumps through the window as well, partially hanging out of it. The car drives forward though, with both victims hanging out of the windows of the car. 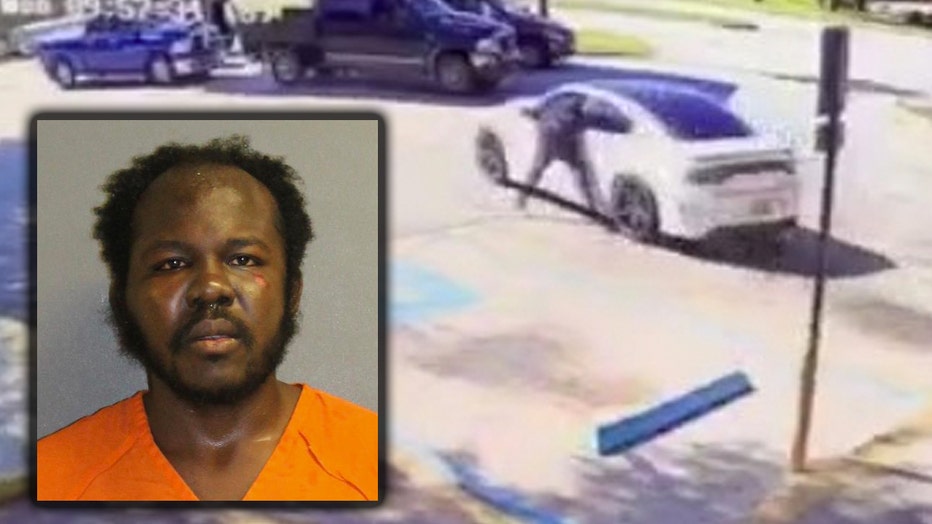 The arrest affidavit states that the male victim punches Akiode and tries to regain control of the vehicle but it moves forward until striking a concrete light point. A fight then ensues between the male victim and Akiode. He is able to hold Akiode down until law enforcement arrived and took him into custody.

At this time, officers said they learned that a third victim, a child, was in the back seat of the vehicle while the incident occurred. The child was not injured but could have been severely hurt due to the car crashing into a pole. All three victims were taken to the hospital though.

Daytona Beach Police Chief Craig Capri told FOX 35 that it all happened in less than 30 seconds, stating that "that video is pretty compelling when you look at it. It makes you just cringe -- it made me cringe."

“When I got to the hospital, the father was pretty banged-up. He was okay -- alive,” Capri added. “The first thing I said to him was 'man, you're my hero, you did a great job.'”

Police estimate that the crash caused $10,000 worth of damage to the victim's vehicle and another $2,000 in damage to the concrete pole at the 7-Eleven. Akiode is reportedly facing charges for Carjacking without a Firearm or Weapon and Attempted Kidnapping.