Video from Bike Week in Daytona Beach shows police officers arrested Naked Cowboy. At one point, he resists and his guitar is broken in the scuffle.

A Times Square performer known as the "Naked Cowboy" was arrested on a misdemeanor charge of resisting arrest without violence and cited for panhandling while working a gig at Bike Week in Daytona Beach, Florida.

Court records show Robert Burck, 51, who is widely known for wearing only white briefs, boots, and a cowboy hat while playing a brightly colored guitar, was arrested Saturday while performing at the annual event on Florida’s Atlantic coast. Burck is a regular at Bike Week.

The panhandling citation was given after officers saw people tucking dollar bills into Burck’s guitar after taking photographs. Burck then refused to follow directions from a police officer and pulled away from her, according to an arrest report.

When the Daytona Beach police officer redirected Burck against a patrol car, the headstock of his guitar broke, according to the arrest report. The headstock is the part of the guitar at the end that houses the pegs used for tuning the instrument.

Naked Cowboy talks to FOX 35 about his arrest

The popular Naked Cowboy is speaking out to FOX 35 News about his arrest in Daytona Beach. Robert Burck, 51, who is widely known for wearing only white briefs, boots and a cowboy hat while playing a brightly colored guitar, was arrested Saturday, accused of violating the city's panhandling Ordinance.

"The defendant began taking photographs with multiple bystanders, while bystanders placed United States currency inside the guitar’s center sound hole in the area of Main St/S Fern Ln, which was approximately 10 feet away from the front door of a commercially zoned property at 810 Main St.," arresting officers wrote in a report.

A video posted to YouTube shows a police officer attempting to get a handcuffed Burck, whose guitar was still hanging from a strap around his neck, into a patrol car.

FOX 35 was the only news station at his court appearance.

During it, Burck told the judge what he is known for. 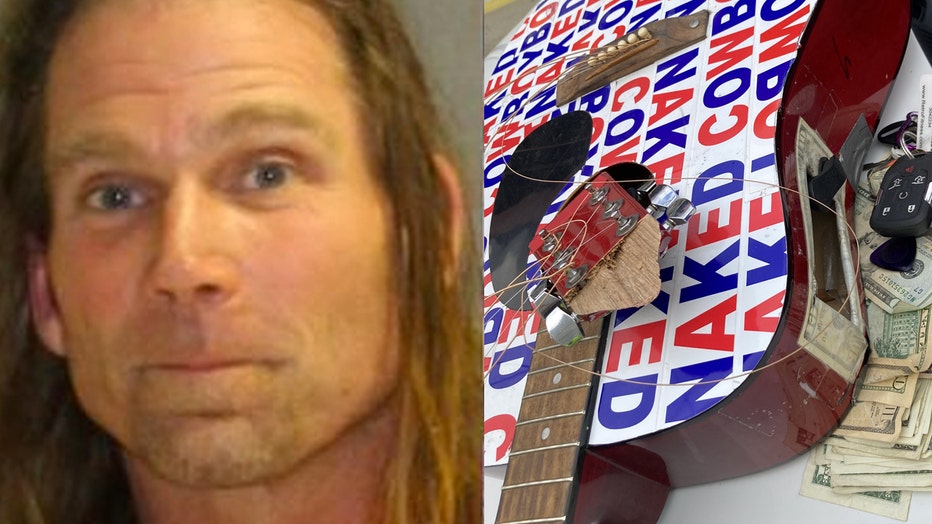 "I sing and play guitar in my underwear," he said. "I'm the Naked Cowboy from New York City. I've been coming down here 21 years in a row."

Burck explained that he was in Daytona Beach for Bike Week and was arrested while playing his guitar on the street. He added that, "I'm not asking for money. I just play the guitar and people take pictures and sometimes they put money in."

However, he was still ready to accept responsibility for the charges, telling the judge that, "It was a pretty big ordeal. I was just mad. I wasn't mad at anybody in particular."

The Naked Cowboy, a man known for playing guitar in New York City's Times Square while dressed in just his underwear, was arrested in Daytona Beach this weekend.

After talking with the public defender, Burck insisted he wanted to settle everything then and there. The judge dismissed the panhandling charge and let Burck plead "no contest" to the resisting charge.

"I find that your plea is knowing, voluntary and intelligent... supported by a factual basis with a full understanding of the consequences. I'll accept your no contest plea," the judge said.

He sentenced Burck to time-served and ordered him to pay $223 in court costs.